The UK floods, Johnson vanishes, and here's who's meant to be in charge - Canary 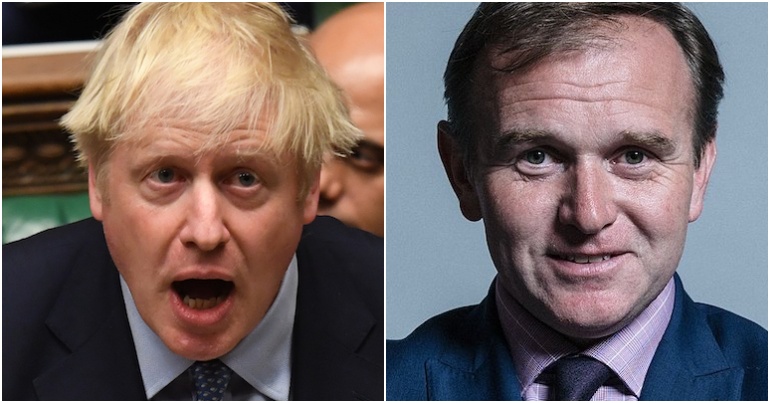 The ferocity of Storm Dennis, the second storm to hit the UK in two weeks, led the Environment Agency (EA) to issue a record number of flood warnings. But Boris Johnson didn’t show up. Instead, he sent the new environment secretary, George Eustice. In the face of widespread devastation, Eustice insisted he’s “happy” with the UK’s flood defences. Yet in the face of such a critical event, Eustice’s history shows that it’s not just extreme weather we should worry about with him in this key position.

On 14 February, the Yorkshire Post said “We’re drowning”. It also urged Johnson to “take immediate action to aid stricken communities” ahead of Storm Dennis. As it reported, Johnson insisted in December that Yorkshire’s floods were “not a national emergency”. But that “was before Storm Ciara inflicted further misery” in areas “promised fully functioning defences after the 2015 floods”.

During the latest storm, by 4.45pm on 16 February, three people had died and two major incidents had been declared in England and Wales.

Eustice visited some areas on 16 February, insisting he was there in Johnson’s place. As the UK flooded, the PM reportedly worked from “a grace-and-favour 115-room lakeside mansion”.

George Eustice – is this the berk who's trying to assert that "our flood defences are working" – despite the overwhelming evidence to the contrary? https://t.co/0QJf2Cjrrn

George Eustice failed to say if #BorisJohnson will visit victims of the #StormDennis flooding. As Labour demanded a COBRA meeting, he claimed he was 'happy' with how defences had worked – yet admitted he could not help every home. https://t.co/SM4LG7lkEF #UK #stormdennisuk

Why has Boris Johnson not called a COBRA meeting to deal with the severe floods? He did so just before the General Election when he needed your votes, but not now. People’s homes and businesses are underwater. It’s time for a proper Government response https://t.co/eTVoODOcjV

It’s a doubly pertinent question given that the UK still has around 550 flood warnings in place. Five are severe and threaten “danger to life”.

Rivers are still rising, #StormDennis may have passed but this is not yet over, please remain vigilant #Floodaware #PrepareActSurvive
Levels in #Shropshire are already above those we have experienced recently. https://t.co/5AefZ3ciyW provide the latest levels and predictions. pic.twitter.com/159ZL69W4N

While Eustice’s response to the floods is shocking, his voting record – especially on environmental issues – is even worse. He’s persistently voted against any measures to halt the climate crisis. Indeed, it’s so bad that he scored 0% in the Guardian’s climate ranking. This charts MPs’ “record on 16 indicative climate votes between 2008 and 2018”. In 2015, Eustice also received a £5,000 donation from “Neil Record, a director of the Global Warming Policy Forum, a climate science sceptic organisation”.

Yet as FarmingUK reported, without a hint of irony, Eustice:

told Sky News that the government had done a ‘huge amount’, blaming the ‘nature of climate change’ for the severity of the weather.

When Johnson promoted the Conservative MP for Camborne, Redruth and Hayle, Caroline Lucas drew attention to his track record:

Our environment is now being *safeguarded* by a minister who
– Voted 14 times against measures to tackle climate change
– Voted 3 times against support for local carbon electricity
– Described environmental protection laws as “spirit crushing”
🤦‍♀️ https://t.co/dakFMpwapO

The British Association for Shooting and Conservation (BASC) [which] celebrated the appointment of a ‘real countryman’, under whom it anticipates a bright future for shooting.

It noted too that those supporting Eustice offer no reassurance to environmentalists “concerned about the impact of farming in particular on biodiversity and the ability of the UK’s soil and vegetation to sequester carbon dioxide”. This is a crucial issue in tackling climate breakdown.

Eustice insisted that current flood defences ‘work well’. But he failed to acknowledge huge EA cuts under successive Conservative-led governments. According to Unison, the “government’s own scientific advisers” anticipate more floods resulting from the climate crisis, yet:

The government has, by and large, protected capital investment in flood defences, but that’s rather less impressive than it sounds when you consider that it has also slashed revenue spending – the money for maintenance and repairs…

At a time when inflation has increased by 11%: in real terms, the Environment Agency grant has been cut by more than a quarter.

There are also many natural ways to build flood defences. According to a recent study, reintroducing beavers reduces the risk of flooding in some areas.

In 2014, George Monbiot noted that beaver “dams help to hold back floods, prevent scouring and erosion and stabilise rivers’ banks and beds”. Yet Eustice, Department for Environment, Food and Rural Affairs (Defra) undersecretary at that time, announced plans to “recapture and rehome…wild beavers”.

We need critical climate action now. People in flood-stricken areas know only too well that “so-called ‘once in a century’ floods and other extreme weather are becoming the norm”. Yet it’s clearly not a Tory priority, and Eustice “is now the fifth Environment Secretary in five years”.

As The Canary has previously reported, Eustice has been known to lie. Perhaps ‘inspired’ by watching Johnson in action, this seems to be the new norm for Tory ministers. But with him in this crucial role, there’s now a perfect storm looming which threatens us all.