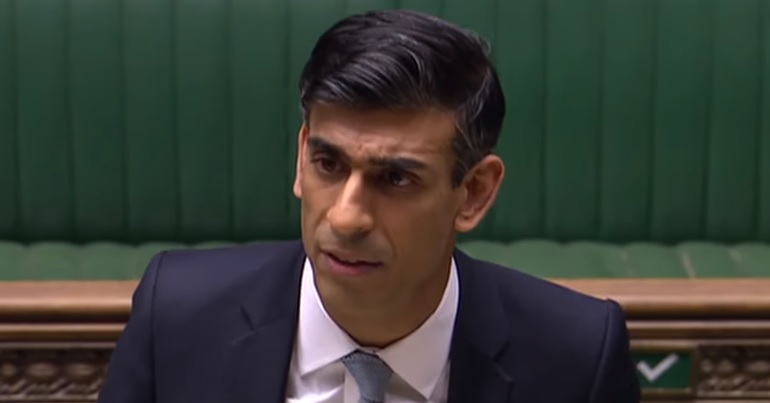 Chancellor Rishi Sunak unveiled his coronavirus (Covid-19) recovery plan on 8 July. Though the media is making much of measures he outlined to ‘save jobs’, the most alarming detail rested in what he didn’t say. Namely, the fact that the chancellor only dedicated around 5% of his speech to the climate.

Within hours of his speech, experts revealed the world is likely to hit 1.5C warming within the next five years. Clearly, the UK’s leadership is wholly unequipped to tackle the ecological crisis on its doorstep.

In the 5% of his speech focused on a “green recovery”, Sunak laid out his government’s plans to enhance energy efficiency in homes and public buildings with £3bn in funding. He also revealed a £40m green jobs challenge fund, £10m for an automotive transformation fund and £100m in funding for carbon capture technology. That was pretty much the total sum of his attention to the climate crisis. Renewable energy investment (not to mention fossil fuel divestment), adequate nature restoration initiatives, comprehensive green transport measures and more were absent.

The money allocated to help restore nature falls embarrassingly short of what is needed to tackle the twin emergencies we face: climate change and nature loss.

Bennett also recently took aim at the recovery plan Boris Johnson outlined on 1 July. The Wildlife Trusts, along with the National Trust and the Royal Society for the Protection of Birds (RSPB), wrote a letter to the Observer on the proposals. Johnson’s plan appeared to include undoing protections for the natural world – “newt-counting” as he disdainfully put it. In their letter, the groups said:

Rebooting our economy needs to be done in a way that doesn’t exacerbate the current environmental and climate emergencies. Ripping up important laws and lowering our standards would be a betrayal of previous commitments and reduce our international standing.

The chancellor made many of the right noises about sparking a green recovery. But instead of digging in to deliver on this promise, he seems to have downed spades with the job only partly done. The government has missed the opportunity to kickstart the green recovery we need.

New forecasts from the World Meteorological Organisation (WMO) highlight that it’s more than a ‘missed opportunity’. It’s the only opportunity to avoid climate catastrophe.

Based on climate analysis from meteorological centres in 10 different countries, including the UK’s Met Office, the WMO has predicted there is a 20% chance global temperatures will pass 1.5C warming, above pre-industrial levels, in at least one of the next five years. It also says that annual temperatures of at least a 1C increase are likely between 2020 and 2024. The average temperature increase in 2019 reached 1.1C.

1.5C of warming is the maximum level we can have to avoid the most severe effects of the climate crisis. That’s why 1.5C warming is the target figure in the Paris climate agreement. Exceeding 1.5C in a single year wouldn’t officially breach the agreement. But as the Met Office said, it shows “how close 1.5C is to where we are at the moment”.

The WMO further asserted that the Arctic will face more dramatic warming by comparison. This is not unexpected as the Arctic is warming twice as fast as the rest of the planet, with temperatures in the Russian Arctic reaching 38C in June. Meanwhile, the WMO said areas of Australia, South America and southern Africa are going to face even drier conditions this year.

The predictions follow dire CO2 readings from the Mauna Loa Observatory in the US released in June. The Scripps Institution of Oceanography found that CO2 concentrations in the atmosphere had reached a record level of 417.2 parts per million (ppm) in May. CO2 levels and global warming are intimately linked. Because, as NASA has explained, CO2 is responsible for the vast amount of “radiative forcing” that heats the planet.

The widespread global shutdowns due to coronavirus appeared to have a minimal impact on CO2 levels. Ralph Keeling, a geochemist at the Scripps Institution of Oceanography, said that the CO2 increase could have hit 2.8ppm, rather than 2.4ppm, had the lockdowns not happened. But he asserted that humankind would have to reduce its fossil fuel use by 10% globally for a year in order for the reduction to have a significant impact on CO2 levels. The WMO didn’t take the lockdowns into account in its predictions. But as the Guardian pointed out:

the buildup of CO2 is a bit like trash in a landfill. As we keep emitting, it keeps piling up. The crisis has slowed emissions, but not enough to show up perceptibly at Mauna Loa. What will matter much more is the trajectory we take coming out of this situation.

The UK’s trajectory is now crystal clear. The country’s leaders are tinkering rather than transforming. They’re not offering a green recovery, but a ‘business as usual’ recovery. Given “how close 1.5C is to where we are at the moment”, that should alarm us all.