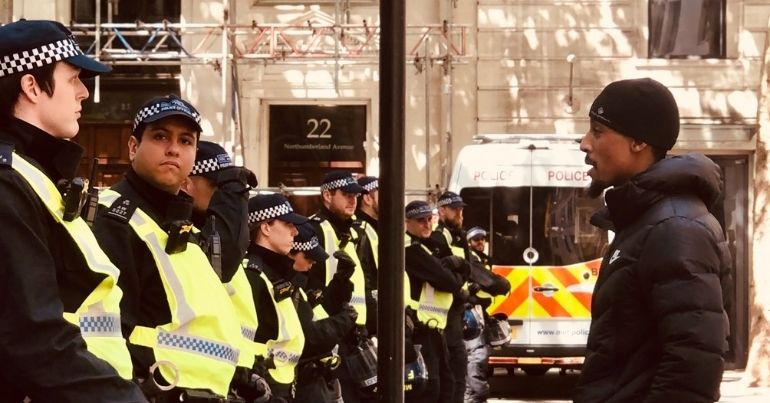 The Network for Police Monitoring (Netpol) has released a new report on the policing of Britain’s 2020 Black Lives Matter protests. It says the research, based on evidence from witnesses, reveals the widespread “excessive use of force, failures in the duty of care, and racial discrimination” carried out by police against predominantly young Black protesters in urban centres during and after the peaceful protests. Netpol concludes that “the policing of these protests was institutionally racist”.

Netpol’s report comes days after a Joint Committee on Human Rights inquiry found that Black people’s human rights are not being protected equally to those of white people. Meanwhile, on 10 November, Stephen Lawrence’s family highlighted institutional racism in the police during the Undercover Policing Enquiry.

Look at what we have to endure in our day to day lives as Black people and what we see on the news and on social media. It all flashes before your eyes when you see another young [person of colour] on the floor bloody, all by the hands of police.

As well as protesters, Netpol gathered witness statements from legal observers. One said:

Multiple individuals in visible distress are reaching out to legal observers in the crowd, a lot of which appear very young. Legal observers are made aware that an injured protester is denied necessary healthcare. After lengthy negotiation, and insisting that officers have a duty of care to injured protestors, a few harmed individuals are being let out of the kettle, without any healthcare offered.

Netpol places this in the wider context of racist policing in Britain, including the disproportionate policing of young Black people during the Coronavirus pandemic. Netpol also points to the “stereotypical and racist characterisation of protestors”, including by home secretary Priti Patel, as “thugs and criminals“.

Twenty years ago the MacPherson report said publicly what Black people knew to be true: policing in Britain is steeped in institutional racism.

Today, little has changed. In criminal justice, in education, in healthcare, and in the workplace, we are still held back by racism, both explicit and institutional. The Black Lives Matter movement has forced a global reckoning with the racism that our political system is steeped in – it is a grotesque injustice that those protestors were then subject to racist injustice from our police.

Netpol argues the police have failed to uphold their legal duty to facilitate the public’s right to protest. It is calling for an “alternative model in which non-police organisations, such as healthcare workers and community organisations, are engaged in the management of future protests, rather than the police”.

There is a bitter irony in the fact that protests against racism in policing were themselves sites of disproportionate use of force and discriminatory practices. When taken case-by-case, the evidence in this report suggests racially discriminatory policing, but when viewed collectively, there can be little doubt that policing in Britain still has a serious problem with institutional racism.

The evidence of this report makes it clear that police cannot and should not be tasked with managing protests of this nature, and have put the right to freedom of assembly at risk. We call for an alternative model which engages non-police organisations to manage protests in future. This would better ensure the safety of all those who take to the streets to call for change and challenge injustices, and uphold this essential right of a democratic society.

The police have long been used as a tool for racist oppression, central to Britain’s story of race and resistance. The policing of the Black Lives Matter protests sits within a long history of heavy-handed policing of young Black people challenging the racist status quo. During the 1919 ‘race riots’, victims of racist violence were disproportionately arrested. The dominant role of vicious white racist mobs in the 1958 Notting Hill riots was intentionally played down by senior officers. Black young people continued to be over-policed and under-protected during more recent uprisings in the 1980s, ’90s and ’00s. So harassment and criminalisation of peaceful Black Lives Matter demonstrators comes as no surprise.

Half-hearted attempts to diversify the force and introduce unconscious bias training were destined to fail. Neither intervention challenges the institutional racism inherent in our police force. As a result, race disparities in the youth and criminal justice systems continue to increase. As the case of Kevin Clarke shows, who died after being restrained by officers during a mental health crisis, the police also appear ill-equipped to deal with mental health crises. The current system in which police are required to attend to health and social issues puts Black people in harm’s way.

Decades of evidence shows that Britain’s police force is not equipped to manage protests in a way that protects the rights and safety of protesters. Particularly during demonstrations led by young Black people fighting for racial and social justice. Netpol’s “alternative model” makes perfect sense. Until we see an end to the management of protests by the police’s iron fist, we will not see an end to state-sanctioned violence and injustice in the name of public safety.

The Canary contacted the Home Office for comment, but none was provided by the time of publication.