Osborne has gone, but we are still breathing in the pollution he left behind [VIDEO] - The Canary 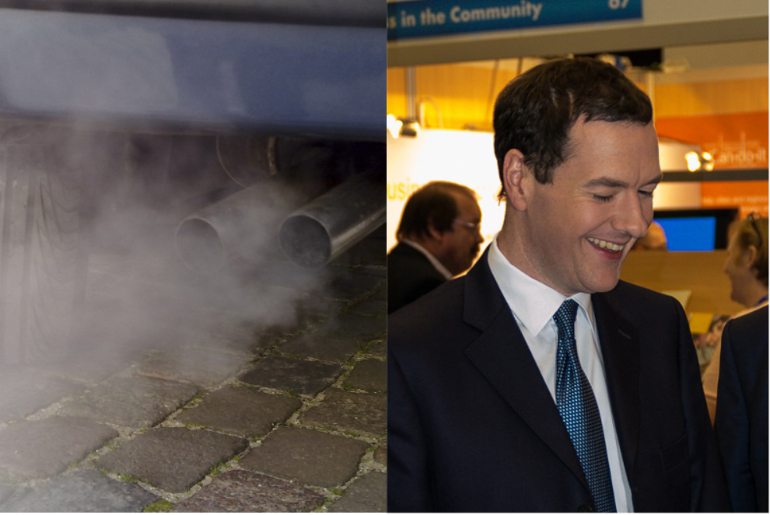 The government has faced a legal challenge in the High Court for not doing enough to reduce air pollution in the UK. During the case, George Osborne stood accused of blocking environment department plans to reduce diesel car use while he was Chancellor. This despite the fact that diesel exhaust fumes are a major contributor to hazardous levels of air pollution across many urban areas.

ClientEarth is a group of “activist lawyers” which aims to use the law to bring about better protection for the environment. It has launched this latest challenge due to the UK government’s “repeated failure to tackle illegal air pollution”.

In a case brought by ClientEarth last year, the Supreme Court ordered the Environment Secretary to devise a plan to meet EU air pollution rules by the end of 2015. The government’s failure to abide by this previous ruling triggered the current legal challenge.

Diesel exhaust fumes are particularly strong in emissions of nitrogen oxides (NOx) and particulate matter (PM), which are microscopic particles that can enter the bloodstream when inhaled. Exposure to excessive levels of these is linked to increased risk of cancer, respiratory diseases like asthma, and cardiovascular diseases such as coronary heart disease.

These fumes produces around four times more NOx than petrol, and 22 times more PM. To make matters worse, 97% of modern diesel cars emit over the official limit for NOx. A quarter exceed the limit by at least six times.

The stakes are very high when it comes to air pollution. A report released by the Royal College of Physicians estimated that outdoor air pollution contributes to around 40,000 premature deaths a year in the UK. But before these people die an early death, many will suffer chronic health conditions, which may affect their ability to work and require significant medical attention.

The estimated costs of air pollution to the UK economy add up to more than £27bn per year, according to James Thornton, CEO of ClientEarth. This is the equivalent of nearly a quarter of the current £116bn annual NHS budget.

Thornton was present in court on the first day and said:

We offered evidence in court today that the previous Chancellor, George Osborne, made decisions about air pollution based on money – to spend as little as possible. That is not allowed under the law. Health comes first.

The law Thornton refers to is the EU Air Quality Directive, which came into force in 2008. The directive obliges EU countries to keep air pollutants below set limits, to protect the health of the population. An example of how badly the UK is failing to comply with these limits came in January 2016, when London managed to exceed its entire annual pollution limit in just one week.

ClientEarth informed [paywall] the High Court that the Department for Environment, Food and Rural Affairs (Defra) had originally proposed clean air zones for sixteen cities other than London. Along with tax measures affecting VAT, and scrappage schemes for dirtier vehicles that would discourage the use of diesel cars. The plans by Defra were in response to the Supreme Court ruling in 2015.

According to official correspondence obtained by ClientEarth and shown to the court, Her Majesty’s Treasury (Osborne’s department) refused to contemplate such changes, and the Chancellor’s stance was “very clear”.

The same correspondence stated, as reported (paywall) in the Financial Times, that the Treasury thought Defra’s plans were a “high cost to HMG [Her Majesty’s Government] at a time of significant affordability constraints” and were, “not the minimum needed to secure compliance” with EU air pollution limits.

The documents also recorded the Treasury vetoing the inclusion of diesel cars in the proposed Defra clean air zones. Alan Andrews, a ClientEarth lawyer, said (paywall) outside the court:

The Treasury’s approach in the face of the tragic toll of air pollution in this country was to oppose anything but the bare minimum as too expensive.

Osborne declined to comment on the story in the Financial Times. A government spokesperson said (paywall) that ministers were “firmly committed to improving the UK’s air quality” and that more than £2bn since 2011 had been spent on air quality improvement measures, including boosting ultra-low emissions vehicles (Ulevs).

What the government spokesperson didn’t mention is that despite the billions spent, the UK is way behind on its targets to introduce Ulevs, as previously reported in The Canary.

Failure to tackle air pollution is just one more example of government ‘economies’ failing to consider the cost of cuts to people’s lives. The UK government faced extensive criticism in this year’s UN Human Rights Committee report, especially on austerity measure effects on vulnerable groups such as the disabled. As The Canary pointed out :

The Committee is seriously concerned about the disproportionate adverse impact that austerity measures, introduced since 2010, are having on… disadvantaged and marginalized individuals and groups. The Committee is concerned that the State party has not undertaken a comprehensive assessment of the cumulative impact of such measures… in a way that is recognized by civil society and national independent monitoring mechanisms.

The Canary also reported on evidence showing that deaths increase amongst those affected by austerity-driven cuts to the social security system.

Even when faced with figures like these the austerity drive continues; a recent cost cutting move in Greater Manchester threatened to sack every remaining firefighter on the force.

The judge reportedly said during the hearing that cost was the nub of the case. Thornton, summing up, said:

Time spent balancing cost against projected effectiveness is time when thousands continue to die and be made seriously ill by air pollution.

We all – children and adults alike – have the right to breathe clean air.

The case brought against the government has now closed, but ClientEarth reports that it will be weeks, possibly months, before the judge announces a ruling.

– Support the valiant work of ClientEarth, fighting for a better environment for us all.