The front page of The Daily Mail reached a new level of hypocrisy on 20 October. The headline screamed: Give ‘child migrants’ age tests, says Straw. But pictured in the sidebar alongside the story is a photo of Cindy Crawford, aged 50, and her 15-year-old daughter. The caption reads: Spot the difference… supermodel Cindy and her daughter!: 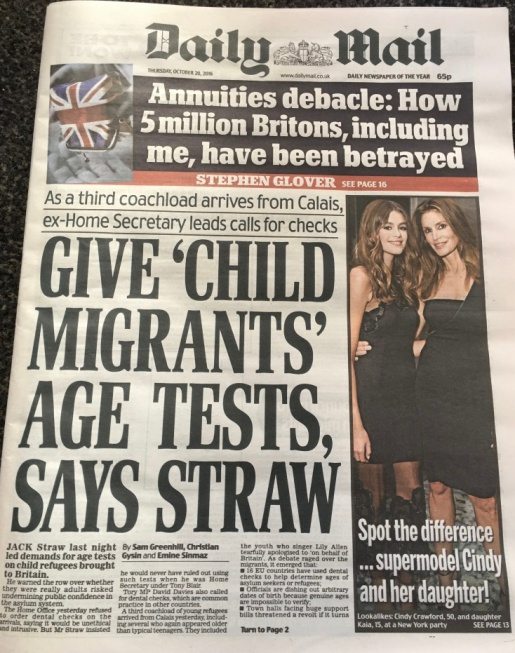 How old do teenagers look?

But while The Mail may not see the irony in posting a photo where they claim they can’t tell the difference between a 15-year-old and a 50-year-old just as they accuse child refugees of looking like adults, many people have been pointing out how difficult it is to tell how old someone is from a photograph.

People have taken to social media to show pictures of teenagers, and highlight how difficult it is to tell someone’s age from a photograph:

The level of hypocrisy shown on this front page could be funny if it wasn’t so horrific. But the message is clear. Light-skinned women can look any age they want, and are celebrated for looking simultaneously younger and older than their ages. Meanwhile, dark-skinned refugees must be vilified and treated with suspicion.

Instead of welcoming children who have been through hell into our country, the tabloid press seems determined to drag them through the mud. These are vulnerable people who should be protected, not photographed and splashed over the front pages.

According to the Mail article, former Labour Home Secretary Jack Straw said that:

What I would say to those supporting an increase in numbers of refugees to come here is this: if it turns out those coming in here are over 18 – and the truth will emerge after a while – then it will undermine public confidence in the whole system.

Unfortunately, it is the politicians and the right-wing press who are undermining public confidence in the whole system. And this front page shows the hypocritical standards the press are prepared to go to in continuing this agenda.