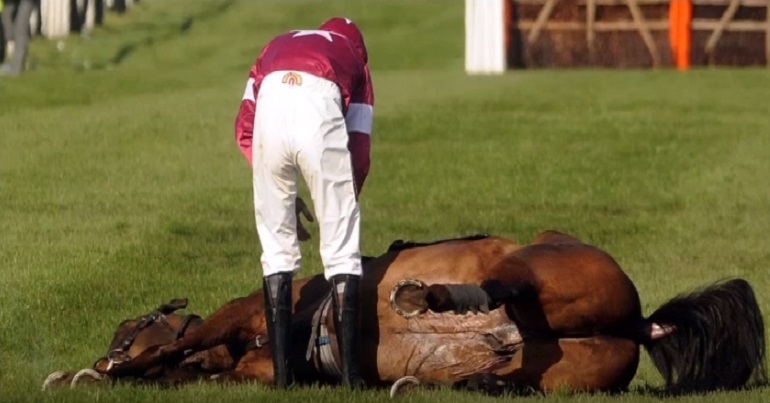 WARNING: THIS ARTICLE CONTAINS CONTENT THAT MAY UPSET THE READER

A campaign on social media is taking aim at the Cheltenham Festival of horse racing. Its message is a clear one: #YouBetTheyDie. And it’s timely as two horses were killed on day one.

You bet they die. And they do

#YouBetTheyDie originated from a campaign against greyhound racing. It has some stark facts about horse racing:

Yet again @BBCRadio4 discussed #horseracing extensively on the @BBCr4today – will they mention the horses killed at Cheltenham in the morning?#YouBetTheyDie
The pro racing #BBC disgust me pic.twitter.com/lvpTBC8DU5

So amid the Cheltenham Festival, people have been using the hashtag to highlight their concerns over horse racing:

Two horses have already died on day one of the #CheltenhamFestival
Mossback and Report to Base both only 6 years old were put down after falls.
RETWEET if you agree that the cruelty suffered by these horses must stop.#YouBetTheyDiehttps://t.co/vReB6L72Y1 pic.twitter.com/8QHwkbwjgw

I know! Panic! Broken leg, He'll have to be put down. Oh, no – it's OK. That's just the horses. Phew. #YouBetTheyDie #CheltenhamFestival pic.twitter.com/Cwqa9AGJvH

As the campaign group People for the Ethical Treatment of Animals (PETA) noted, four horses died during the 2017 Cheltenham Festival. 12 died at the course across the whole year. It says of horse racing:

Horses used in races are subjected to painful whipping in order to force them to run faster and jump higher than they naturally would. The stress on their bodies can lead to debilitating medical conditions, including bleeding lungs and gastric ulcers. Many are first raced when they are too young and haven’t fully developed, increasing the risk of injury and illness.

A short film from the group Animal Aid perhaps sums the situation up best:

But these kinds of images don’t seem to put people off: attendance at race courses in 2015 stood [pdf, p6] at 6.1 million, up over 5% year-on-year. But as one social media user pointed out:

When you bet on horse racing you’re funding the torture and death of these animals and placing your own temporary entertainment above their lives #youbettheydie https://t.co/AulRmjBP3v

It is perhaps of little wonder that we live in a society where homeless people are allowed to die on our streets, and disabled people are subject to “grave” and “systematic” violations of their human rights. Because when we allow animals to be treated in this manner, how can we expect much better for others that the establishment class deem to be below them?

– Sign the petition to introduce a new, regulatory body for horse racing.