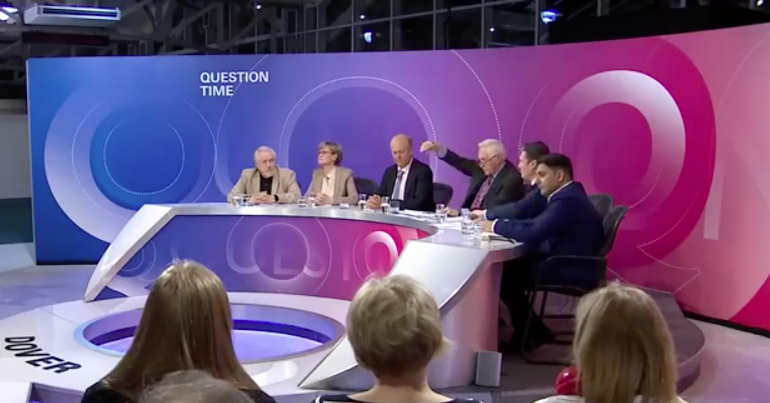 During last night’s BBC Question Time, a member of the audience asked a simple question about Russia. The fact that it went unanswered speaks to why it is so important to remain calm and considered in the face of a propaganda war.

The audience member’s question was about the poisoning of Russian double-agent Sergei Skripal and his daughter Yulia in Salisbury. Labour leader Jeremy Corbyn, French leader Emmanuelle Macron, and the NATO secretary-general all back an evidence-based approach to the poisoning. But the UK government and press have gone full-on ‘Rule Britannia’, with defence secretary Gavin Williamson literally telling Russia to “go away” and “shut up”.

"Frankly Russia should go away, it should shut up" – UK Defence Secretary Gavin Williamson asked about Russia's response to its diplomats being expelled https://t.co/MoQBur2QI3 pic.twitter.com/xr94PxX23c

So when an audience member asks about returning Russian political donations to UK parties, you might expect those reacting most loudly to the poisoning to be in favour. You would be wrong.

Despite the near-hysterical reactions from hawkish parliamentarians and pundits alike, none seem in favour of returning Russian cash. Labour is pushing for tough economic sanctions on the Russian state and an end to influence-gaining political donations in the UK. But the Conservatives are striking a different tune.

On Question Time, Conservative secretary of state for transport Chris Grayling could only argue that donations were legal. He told the audience that his party can only accept donations from UK citizens and UK businesses. And he accused those criticising the donations of tarring all Russians with the same brush. But other panellists, including Labour’s Kier Starmer, highlighted that whilst the donations might technically be legal, they are also patently in exchange for something.

The Conservative Party has accepted more than £3m in donations from Russian oligarchs since coming to power in 2010, £820,000 of that sum since Theresa May became prime minster in 2016. This includes £30,000 from the wife of a former Putin crony to have dinner with Britain’s defence secretary. The Williamson dinner is just one example showing how (despite Grayling’s protestations), key members of the Russian leadership can buy access to the Conservative government.

Dimbleby’s unanswered question was the most important raised on the show. The behaviour of the press and the May government suggests that cash ensures that, even in moments like this, Russian oligarchs can be sure of business as usual in Britain.

That is the biggest question “why do they give money to the Tory party, what do they get back?” pic.twitter.com/clbgF6fc3w

“Why do Russia-linked donors want to give the Conservative party money? What do they get back?” Dimbleby asks Grayling, who mumbles haplessly about how all the donations are technically legal. #bbcqt

However, they have not asked the Tories to explain why they continue to protect Russian money-laundering, continue to accept donations from Putin cronies and continue to sell nuclear materials to Russia#BBCQT pic.twitter.com/jqJcVM5a4Q

You need to be very accurate where this money came from before you accept this money.

If you identify it’s dirty money [you’re] just not allowed to accept it. Because I think reputation is very important. [The] reputation of the Conservative party in the UK and all around the world needs to be clear.

Given the hullabaloo that the press and political class are making, you would expect universal support for this. Instead, the Conservative Party is playing possum. Perhaps because the truth is that, while the public hyperbole continues, the backroom deals continue. Just this week at PMQs, Theresa May was asked directly about genuinely limiting Russia’s power. Answers came there none.

Just as with political donations, any question of substance on this issue is ignored or responded to with meaningless soundbites. Instead of chasing down the answers, the press has (once again) attacked Jeremy Corbyn – the person who has already answered these questions in full.

In times like this, it pays to be sceptical.