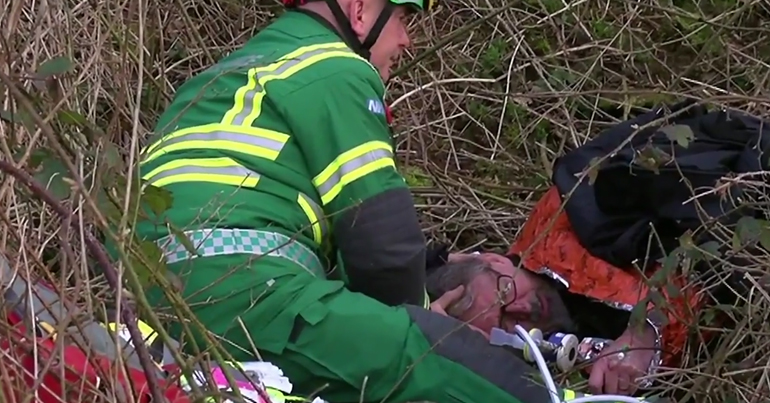 Two men with the Belvoir Hunt have been sentenced for attacking two anti-foxhunting investigators. But their penalty has provoked outrage for being “farcically lenient”.

Darryl Cunnington and Roger Swaine, two investigators for animal welfare charity League Against Cruel Sports (The League), were monitoring the Belvoir Hunt on 12 March 2016. But they were approached and attacked by father and son George and Thomas Grant. George Grant is the Belvoir Hunt’s terrier man.

The pair were involved in punching Swaine before pushing Cunnington from a 14-foot drop, breaking his neck in three places. And the pair also stole an investigator’s camera. Four other people were allegedly involved.

Cunnington says he and Swaine were at least half a mile from the Belvoir Hunt. And according to BBC News, George Grant told his son to:

Go and get the boys and come back.

On 14 June, the Grants each received 13-month sentences suspended for two years, 200 hours of community service, and a £500 fine paid to the victims. A character witness statement supporting George Grant was given by Lady Sarah McCorquodale, joint master of the Belvoir Hunt and sister of the late Princess Diana.

Speaking to The Canary, The League said:

Two men who broke a charity worker’s neck have received a suspended sentence. Many people will be questioning whether that’s an appropriate sentence. To say that we are disappointed would be an understatement.

The animal welfare charity has no plans to appeal. But it is seeking information on the four other individuals involved with the assault.

Two of the @BelvoirHunt’s terriermen received farcically lenient sentences today after admitting to GBH, ABH, theft and criminal damage including breaking the neck of an anti-hunt campaigner https://t.co/YA0XFKuji1

Others also expressed outrage at the apparent leniency:

Our justice system is morally bankrupt. A need for politicians of integrity to address what happens here before we look further afield. The law shores up corruption and prejudice, ham strung by weak and ineffectual case law. Never more apparent than in Hunting @HackneyAbbott https://t.co/g8GY0V2Fb8

Utterly unacceptable, any other walk of life and they would be in prison tonight. Someone could have died.

It’s not the first time bad behaviour by the Belvoir Hunt has reached the public.

In March 2018, gamekeeper Nigel Smith was found guilty of holding a fox captive. On the same day the Belvoir Hunt was meeting nearby, investigators from The League filmed him retrieving the fox. Cunnington headed up the operation to expose Smith’s actions.

In February 2018, police began investigating the Belvoir Hunt after it allegedly killed a fox in Melton Country Park. Melton town council said horse riding and hunting in its parks are prohibited by local bye-laws. And in March 2016, police officer Sharon Roscoe quit her wildlife officer role after being exposed as riding with the Belvoir Hunt.