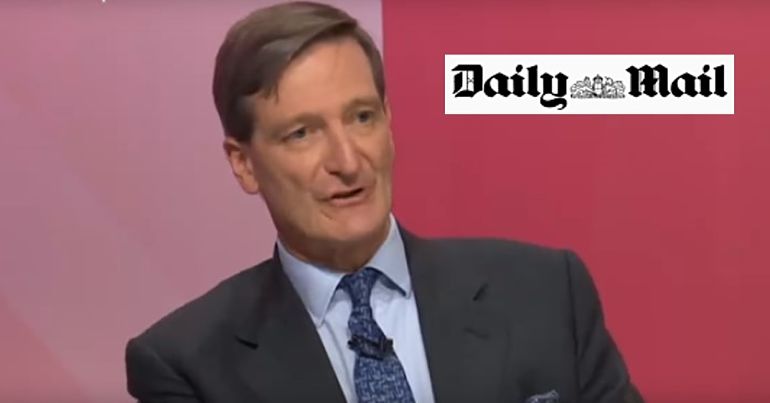 During BBC Question Time on 14 June, Conservative MP Dominic Grieve launched an unexpected and savage take-down of the Daily Mail, and specifically its editor Paul Dacre.

Credit where credit’s due

Grieve was responding to accusations in the Daily Mail that he was “supping with the devil” in attending a meeting with “avowed enemies of Brexit”. In apparent exasperation, he explained that the Daily Mail’s use of personal attacks creates:

a level of debate which makes rational discussion impossible, and it’s deliberately designed to do it. When Mr Dacre in the Daily Mail decides to raise the temperature and lead to you being bombarded with hate mail, he does it for the deliberate intention of trying to prevent people engaging in rational debate.

"It's a level of debate which makes rational discussion impossible"

Grieve’s open criticism of the Daily Mail, and Dacre specifically, shocked many on social media:

I never thought I'd see the day a Tory MP dare to criticise Paul Dacre on National Television. There's hope for your soul after all, Mr Grieve. #BBCQT

“The smart way to keep people passive and obedient is to strictly limit the spectrum of acceptable opinion, but allow very lively debate within that spectrum….” Noam Chomsky

A legacy of fear

On 6 June, Dacre announced he will be stepping down from his role as editor of the Mail in November 2018, having ruled with an iron fist for 26 years. He will hand the reins to pro-remain Mail on Sunday editor Geordie Greig and move into a new role as chair and editor-in-chief of Associated Newspapers. Polly Toynbee wrote in the Guardian:

His [Dacre’s] sheer bully-power often frames the national debate by warping broadcasters’ news agendas, because they know the Mail makes politicians quake. Theresa May – his candidate – caves in to him every time, as paralysed on paying for social care as on Brexit.

Dacre’s legacy is one of fear.

From his hard-line Brexit stance including the infamous “enemies of the people” front page, which attacked the judges who decided that parliament should trigger Article 50…

… to the Daily Mail’s relentless immigrant-bashing.

As Grieve said, Dacre’s talent – if you can call it that – is using fear to stem rational debate.

Either through attacking people opposing Brexit…

I completely agree. It should be obvious I'd have thought. The rhetoric of these papers also serves to intimidate leave voters by leading to a climate where they are less likely to voice their opinions if they feel threatened by the other side of the argument.

… or through creating a hostile environment for immigrants in the UK, by deflecting the blame for society’s problems away from the establishment and onto the less powerful:

A great deal of the blame for this Brexit shambles & Hostile Enviroment can be laid at Dacre’s door. #scurrilousrags #Dacre #DailySchmeil #populisttripe

The Daily Mail is a toxic force in national life. #Brexit

As a sitting Conservative MP, Grieve’s savage criticism is surprising. But Dacre’s impending departure has emboldened many. Writing in the Mail on Sunday, Rachel Johnson expressed hope that with new leadership the Daily Mail will become “less inflammatory and more inclusive”. And former Daily Mail journalist Helen Lewis finally spoke out about her time in its clutches:

The Daily Mail may not change its spots overnight. But news of Dacre’s departure has certainly opened the floodgates to criticism of its aggressive, fear-mongering approach.

A Tory MP openly bashing the paper on Question Time was shocking to many. Let’s hope it becomes the norm.