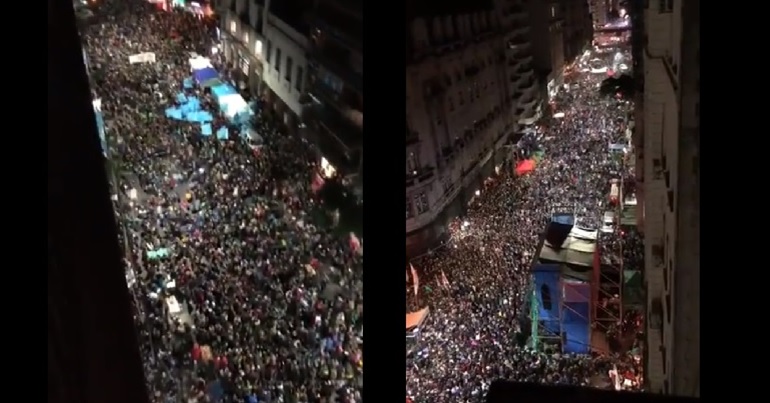 Thousands of women in Argentina are celebrating a significant victory for reproductive rights. The lower house of congress has just approved a bill that would allow the termination of pregnancies within the first 14 weeks. This is a huge step forward for the socially conservative country.

The bill narrowly won with 129 votes for the bill and 125 against the new measure. The bill will now need to secure a majority in the senate in order for it to become law. Women’s rights groups have hailed the win as a major victory in the fight for reproductive rights in Latin America.

They did it! Argentina one step closer to finally having safe & legal abortion with congress passing 131 votes in favour. Amazing videos and pics of public protests throughout the day and night as the chamber debated 💚#AbortoLegalYa #AbortoSeraLey pic.twitter.com/T2vZ9UVEya

No one country has achieved legal abortion because there was a feminist government, it always was a conquest of the feminist movement. Last night Buenos Aires #Argentina pic.twitter.com/mp6ecpgCRO

#Argentina today has committed to make significant progress in defending human rights, and is also sending a message to the rest of the region, where draconian laws on abortion have caused death and suffering for millions of women and girls #AbortoSeraLey https://t.co/Das10SWtv9 pic.twitter.com/YGK0P8hs9D

The bill has come at an important time for women in Argentina. Campaigners have been making global headlines for their mass demonstrations against patriarchy and violence.

UN special rapporteur Dubravka Simonovic found that violence against women, including high rates of femicides, has become systemic in Argentina. The failure of authorities in protecting the rights and lives of women led to the ‘Ni Una Menos’ campaign. It means ‘not one less’ in Spanish, and it’s a reference to the women who have been murdered at the hands of their male partners.

The mass mobilisation of women in response to state apathy has received partial credit for forcing the issue of reproductive rights up the political agenda. But as lawyer Almendra Pizarro said:

I was ecstatic for a second but we have to be realistic. It will be tough fight in the senate. I feel this is a great conquest, the result of a fight that has been going on for a long time

Getting the bill approved by the senate will be tough. Argentina is a conservative country where religion still wields much social and political influence. Pope Francis, who is a native of the Latin American country, waded into the debate in March. He wrote an open letter imploring Argentinian people to ‘defend life’ and oppose the relaxation of abortion laws. But despite fierce opposition from the church and President Mauricio Macri, the campaign for women’s rights has gone from strength to strength. Dr Daniel Ozarow, a campaigner and senior lecturer from Middlesex University, told The Canary:

Yesterday’s victory proved that it’s ordinary women standing up for their rights in their millions who are leading the country, not the Macri government’s neoliberal programme which is causing misery and insecurity for Argentina’s people.

Currently, 97% of Latin American and Caribbean women of reproductive age live in countries where abortions are restricted. It’s thought that over 50,000 illegal abortions are performed each year in Argentina. Until the law catches up with societal changes, the women of Argentina will continue to risk their health, and sometimes even their lives, to obtain basic reproductive rights.

– Support Marie Stopes, the leading provider of sexual and reproductive health services in the UK.

– Also support Women’s Aid, which campaigns to end domestic abuse – and the Fawcett Society, which fights to end the pay gap for women.