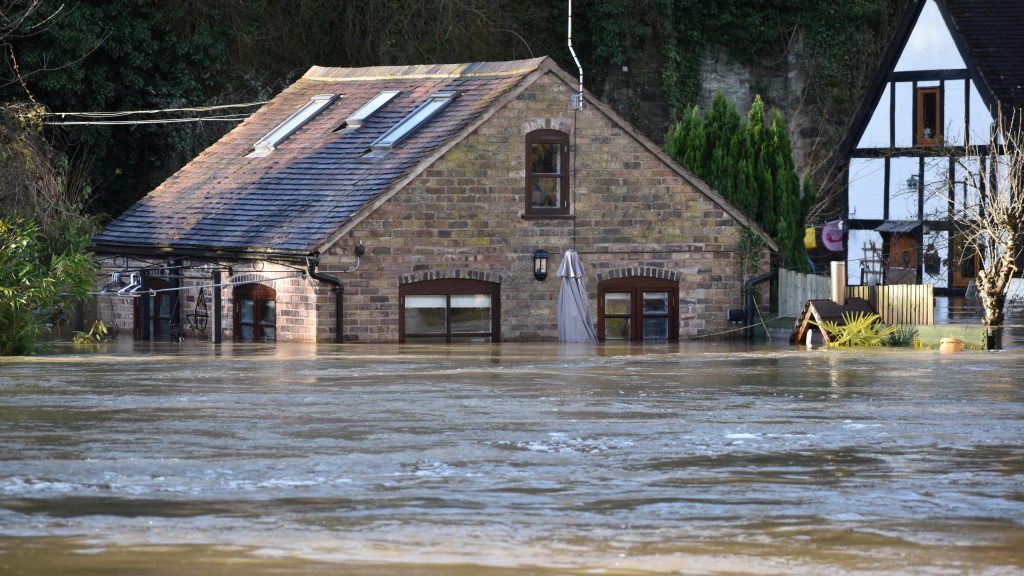 George Eustice has defended the government’s handling of the floods crisis, as he said farmers could be paid to store water on their land to protect communities.

The new environment secretary said there was no need for a public inquiry into recent flooding, which has hit swathes of the country in the wake of Storms Ciara and Dennis.

And in the face of criticism of Boris Johnson’s failure to visit flood-hit communities, Eustice said the prime minister’s presence on the ground would not have had made any difference to the response to the crisis.

In sometimes robust exchanges at the National Farmers’ Union annual conference, he defended the government’s planned changes to payments to farmers, and insisted UK food safety and welfare standards would not be jeopardised through future trade deals.

The new agricultural scheme will have several levels of environmental measures farmers can be paid for, ranging from on-farm activities such as looking after hedges up to landscape-scale schemes such as restoring peatland.

The government is also looking at an exit scheme to help older farmers retire “with dignity” by providing them with the option to take several years of the old subsidy payments in a single settlement in return for giving up their tenancy or selling or renting their farm, he said.

In his speech to the conference, Eustice said the governments’s new approach to funding farming would back efforts to reduce floods.

“Our new, independent agricultural system will give farmers a big part to play, by encouraging land management that supports flood management – releasing the pressure on lowland and urban areas by keeping water in the soil in upland catchments to slow the flow of water through the landscape,” he said.

“Protecting homes and communities from flooding is a public good and is one of the objectives set out in our Agriculture Bill.”

In a question-and-answer session after his speech, Eustice said investments made in flood defences had protected tens of thousands of homes in recent weeks.

But he said: “With climate change we are getting more frequent extreme weather events.

“This has been an incredibly wet winter, and we’ve had a wet winter and then two consecutive storms, Ciara and Dennis, and there’s nowhere for the water to go.”

He said the government had spent £2.5bn on flood defences, some of which were “soft defences” upstream but much of it was hard defences in urban areas.

“But we do recognise there is more to do, because climate change is here to stay – we are seeing more of this extreme weather.”

More than £4bn would be spent over the next five years, and a “big part of our focus is going to be nature-based solutions upstream”, he said.

These could include planting more trees and using natural flood plains and dams to protect lowland areas, he added.

Questioned on the effectiveness of natural flood measures such as planting trees and reintroducing beavers to engineer upstream areas, Eustice said: “It can work, quite a lot.

“Natural flood plains, planting trees, holding water upstream, all of these things can reduce the flow of water and reduce impacts in urban areas.”

He said the government had done a lot of work on flood defences, such as the barriers on the River Severn which had been “absolutely crucial” in protecting homes in the catchment area.

“But if we want a long-term solution to reduce flood risk, we do have to try to hold water upstream.”

Eustice also defended the government’s response to the floods, saying flooding was the first thing that the PM raised with him when he appointed him less than two weeks ago, and had asked him to lead on it.

“It’s entirely right that, in a cabinet government, secretaries of state lead on issues that are relevant to them.”

He said the prime minister had visited flood-hit Yorkshire during the general election campaign because ministers were not in the department and it was harder for civil servants to make the decisions they needed to – so Johnson had stepped in “to get a grip of that situation”.

Asked if it would help if the PM visited communities affected by flooding, he said: “I don’t think it would make any difference at all, we’ve had a grip of the situation.”

NFU president Minette Batters warned of the need for a “seismic investment” in the UK’s water infrastructure, through things such as reservoirs on farms to store water.

She said nature-friendly solutions are only part of the answer, warning: “If you can’t store these millions of gallons of water, you’re going to continue to have the same crisis with communities and farmland.”

And she warned: “Unless cabinet gets out and really sees these issues for themselves, it’s very hard.

“You’re talking about seismic investment in infrastructure, and the more people that get out and see it, the prime minister included, the better.”