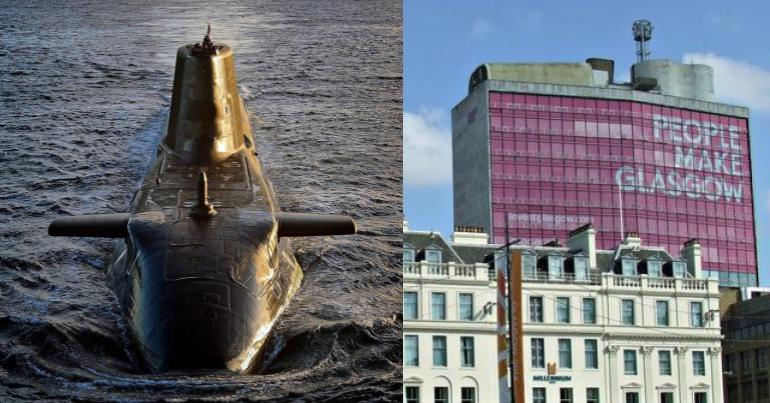 A Glasgow City Council-linked charity was key to the bid to bring an arms fair to Glasgow, The Canary can reveal.

Glasgow Life, a registered charity that operates arts and events services on behalf of the council, manages the convention bureau. GCB offered a “range of free services” to the UDT organisers, Clarion Events.

Prior to Glasgow being selected in July 2017, GCB met with the event company’s defence and security team on multiple occasions. A spokesperson for the SNP-run council confirmed to The Canary that GCB leads on bid processes. The city council has previously defended Glasgow Life’s involvement with UDT.

Campaigners have described the event to The Canary as a “murky whitewash of war and weapons”. Activist groups have said Glasgow Life’s involvement in the bid is “depressing and disappointing”.

UDT uses an image of an Astute Class Submarine at Faslane Naval Base to promote the exhibition. These attack submarines are capable of launching sea-to-land tomahawk missiles. The US used tomahawk missiles in recent strikes on Syria.

GCB officials met with Clarion staff to view the Scottish Event Campus (SEC) site in the first half of 2017. As well as offering to show the UDT organisers around the city, the group presented options for the event’s networking evening. A Clarion official said they hoped to get some “information on paper” during the visit.

The meeting, which took place around three months prior to Glasgow being selected, was not the only one during the bid process.

GCB has continued to liaise with UDT organisers since. On 26 October 2017, officials involved in UDT attended an event in Glasgow at the invitation of the group.

The council-backed charity has also been in contact with UDT to help organise dinner and meeting venues in the city over the past 8 months.

The Canary discovered that GCB offered a “range of free services” to UDT. As well as assisting with venue selection, the group offers pre-conference marketing support and co-ordinated PR campaigns. The charity also offers funding support to conferences.

The UDT conference will showcase several of the world’s major arms organisations. Over 1,400 “international, senior military and industry leaders” will attend the three-day event at the SEC.

The lead sponsor of the UDT event is BAE Systems. BAE is a major supplier of arms to the Saudi Arabian regime. Human rights groups have repeatedly accused Saudi Arabia of violating international law in Yemen.

Also exhibiting is Leonardo. It recently emerged that components for the same type of jet used by Turkey to bomb Kurdish territories were made at the Italian firm’s Edinburgh site. The Syrian Democratic Forces have accused Turkey of “ethnic cleansing” in northern Syria. And the Permanent Peoples’ Tribunal (PPT) has found Turkey responsible for war crimes both at home and abroad.

Over the past two years, several regimes accused of human rights violations have attended UDT events. These include Indonesia, Thailand, and Israel.

Campaigners have described the Glasgow event as a “Trident showcase”. The two main sponsors of the undersea event, BAE and Babcock, are spearheading the Trident renewal programme.

Scottish CND is in talks with other groups in the peace movement to coordinate opposition to the event. Arthur West, the chair of SCND, told The Canary:

This information about Glasgow Life actively campaigning to house an arms trade event in the city is very depressing and disappointing.

It is even more troubling that some of the companies who are supporting this event may have links with the Trident nuclear weapons replacement programme. The replacement project is opposed by a clear majority of Scotland’s politicians and the Scottish public.

Glasgow Life have some questions to answer as to why they think it is reasonable to help house this type of unsavoury event in Scotland’s largest city.

A UDT spokesperson told The Canary that the Trident renewal programme won’t feature at the exhibition.

Arms trade campaigners have also expressed outrage at the Glasgow-based charity’s involvement in the bid to hold the event. A spokesperson for Campaign Against Arms Trade Edinburgh told The Canary:

It is extremely concerning that Glasgow Life actively bid to host the UDT arms fair. The City Council should be supporting the local economy with socially and environmentally responsible events, rather than this murky whitewash of war and weapons.

The UDT website includes a dramatic photo of an Astute-class submarine returning to the Clyde. The Scottish connection they’re less keen to highlight is that these submarines carry the £870,000-per-shot Tomahawk cruise missile, manufactured by Raytheon in Glenrothes. Tomahawks have been used in conflicts including Syria and Yemen, with one strike in the latter killing over forty civilians.

The UDT conference was previously held in Glasgow in 2008. Clarion Events also boasts arms fairs such as DSEI and the International Summit on Borders in its portfolio.

Glasgow Life/GCB and UDT both declined to comment on the developments. GCB referred The Canary to comments made last month, where they pointed to the “economic benefits” the event will bring to the city.

The SNP has remained tight-lipped on the UDT event. The party did not respond to requests for comment.