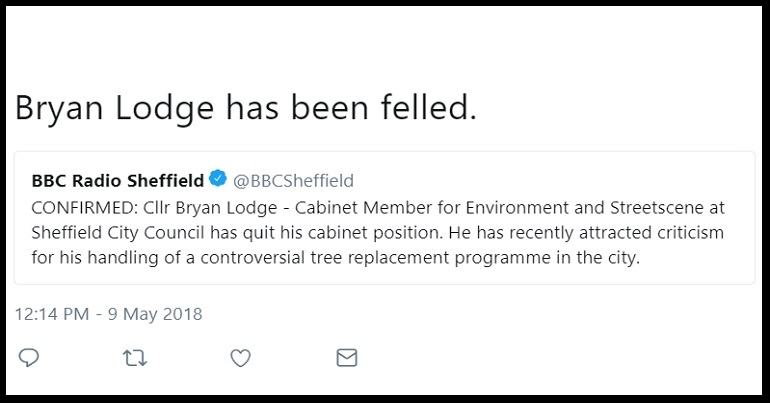 A Labour councillor at the heart of the ongoing Sheffield trees saga has resigned from his position on the city council’s cabinet. And people on social media haven’t exactly been sympathetic…

The quietening of chainsaws?

The council paused the tree-felling programme on 26 March. As the Guardian reported, it said it was doing this because of:

the actions of a handful of people unlawfully entering the safety zones where tree replacement work is being carried out.

Amid the quietening of the chainsaws, the drama has continued. In the recent local elections, Labour lost two seats to the Green Party and two to the Lib Dems.

But now, Labour councillor Bryan Lodge has quit as cabinet member for environment and Streetscene (the department responsible for the tree felling programme).

One for the chop

As the Yorkshire Post reported, Lodge quit his role on Tuesday 8 May. In a statement on Facebook, he said:

Just wanted to say, it’s been an interesting/challenging two years. To the Sheffield City Council officers – you have been awesome. Never let the truth get lost in the aggressive, nasty and personal abuse directed at us.

I’m proud to have worked with such a dedicated, hardworking and professional team of people… We need to get the people of Sheffield, all the people, back on board to realise the benefits of this biggest ever investment in the infrastructure of the city…

I hope that in years to come, others can hold their heads high because I know I can. To the campaigners, I respect your passion but can’t condone the behaviour. Respect plays both ways.

Some people on social media were not exactly shedding a tear at the news of Lodge’s departure:

And it's goodbye from him … Bryan Lodge, who tried to have his opponents imprisoned on trumped up charges, has gone.

Others pointed to a broader problem:

Cllr Bryan Lodge's thinking embodies all that went wrong with Labour over the last 30 years, co-opted and invaded by the thinking of the 1% in cheap wrapping paper tied up with tacky red rosette. More of his ilk must go. We'll push for true Labour socialism in Sheffield and UK.

Bryan Lodge has been felled. https://t.co/JK4ynqsj5e

Sheffield: the eye of a political storm

As The Canary has been documenting, Sheffield has become the eye of a political storm. The council is undertaking a 25-year, £2bn highway maintenance programme which includes the care and felling of trees. There have been ongoing protests from campaigners, opposition councillors, and residents over the programme.

These demonstrations have been highly charged: one saw two pensioners arrested, and another saw local residents reportedly face off against over 30 police officers, private security, and heavy plant machinery.

During this saga, the council took three campaigners to court to prevent them taking “unlawful direct action or from encouraging others to take direct action”. After a judge ruled in favour of the council, it is now reportedly seeking costs from two of the campaigners of £27,000.

Meanwhile, emails revealed South Yorkshire Police “taking orders” directly from Amey over its operations. Recently, The Canary exposed how the council was running a surveillance operation against campaigners and residents; one which campaigners believe could be illegal. A petition has also been launched, calling on the Labour Party in Sheffield to ballot its members over the tree felling programme.

Lodge’s departure is interesting timing. Following a mild embarrassment in the local elections, has Lodge fallen on his sword, Amber Rudd-style, for the greater good of Labour-led Sheffield City Council? If so, it’s unlikely to wash with many campaigners, who believe the only solution to the tree felling saga is root and branch reform within Sheffield Labour Party.