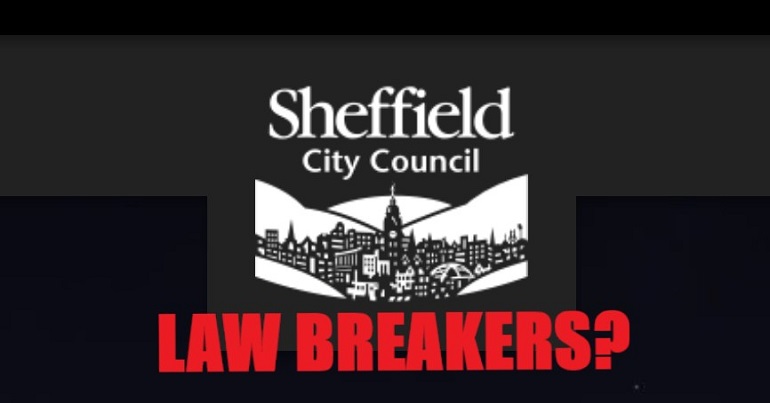 Labour-led Sheffield City Council stands accused of carrying out covert surveillance operations against residents and campaigners, during the ongoing dispute over the chopping down of trees in the city.

Information passed to The Canary details allegations against the council. These include collusion with police and the possible leaking of court evidence to a local newspaper, all in the hope of catching tree campaigners breaking the law.

But the most worrying part of the story is that campaigners believe the council may have broken the law, by hiring a private investigator to spy on residents and protesters.

Sheffield City Council and its contractor Amey are chopping down public trees in the city. Local residents aren’t happy because of the environmental impact, the “Thatcherite” behaviour of the Labour council, and public health concerns. As The Canary has been documenting, people have been campaigning against the felling of trees.

There have been ongoing protests from campaigners, opposition councillors and residents over the programme. These demonstrations have been highly charged: one saw two pensioners arrested, and another saw local residents reportedly face off against over 30 police officers, private security and heavy plant machinery.

After The Canary released details of emails showing the close relationship between South Yorkshire police and Amey, now Sheffield City Council is at the centre of another controversy.

Sheffield City Council had previously denied that it conducts surveillance on residents and campaigners. This surveillance includes photography and filming at sites where tree felling is taking place. It also includes ‘trawling’ social media. But a series of Freedom of Information requests (FOIs) by campaigners eventually forced the council to release some details of its operations.

The FOIs show that, in March 2017, the council did an assessment of how and why it would do surveillance operations. It shows that the council authorised its staff and subcontractors to photograph and video residents and campaigners; specifically with the intention of taking them to court. It said the recording can take place at “council depots or in public areas”. The document also authorised the trawling of social media:

The council document is part of an official application form [pdf] requesting authorisation for “directed surveillance” under the Regulation of Investigatory Powers Act 2000 (RIPA). The council claimed that the document was an “evidence gathering protocol” as part of its preparations for court proceedings, not an application under RIPA.

But further to the council carrying out surveillance, it also hired a private investigator to monitor campaigners. This is where campaigners feel that it appears the council may have broken the law. 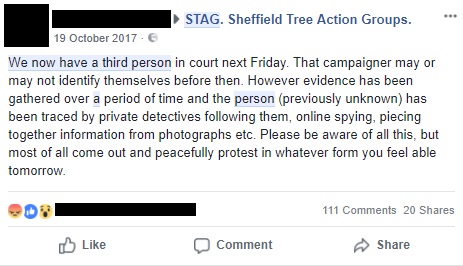 It is clear that campaigners knew they were being ‘snooped’ on, as this Facebook post was before the first FOI regarding the use of a private investigator. The council would not confirm or deny that the investigator was gathering court evidence. But it was even less transparent about the cost.

In the first FOI, the council said that:

Up to 9th October [2017] the cost of the collecting evidence was met by Sheffield City Council. As from this date the costs will be met by Amey.

But also in that FOI, and in a subsequent one, it said it did not hold copies of invoices from the private investigator. It claimed that Amey had them. Meanwhile, the government is threatening to dissolve Douglas H. Savage, as it has not filed any accounts since 2015. It begs the questions: how much did the council/Amey pay Douglas H. Savage? And where did that money go?

Green Party councillor Alison Teal was taken to court by Sheffield City Council over her campaigning on the tree felling programme. She believes that the surveillance operations run deeper than just photographs, filming and private investigators. She told The Canary:

I first became aware of the extent of Amey/Sheffield council surveillance when I received the bundle of evidence they were presenting against me at the injunction hearing last year. There were multiple photographs taken of campaigners on the streets, and excerpts of social media conversations. We found out the council had staff dedicated to monitoring social media, and I’ve grown accustomed to being filmed at protests. I have another court hearing on 30 April and conversations I had on site with a defendant are part of the evidence.

Council staff have been in the onsite police operations van, and we’ve seen Amey staff briefing the police. They’re all in this together. The ‘authorities’ are acting in concert to detain, discredit, demonise and derail the campaign. Community opinion is of no consequence where money is to be made, it seems.

But this is not the whole story. Because according to campaigners the Information Commissioner’s Office (ICO) is currently investigating Sheffield City Council over two matters. Firstly, it is looking into whether the council has breached FOI rules.

Secondly, the ICO is allegedly looking into the council leaking information relating to a court case to local media site The Star. Specifically, campaigners claim that an article published on 11 October 2017 contained a still image of protesters at the site of tree felling. In emails seen by The Canary, The Star confirmed the image was provided by the council. But because the image was from the council’s official surveillance, it may have breached data protection laws. The Canary asked the ICO for comment but received none.

Regrettably, following an increase in criminal activity and continued breaches of a High Court injunction around essential tree works, the council agreed that Amey could undertake overt filming to gather evidence for court around work safety zones. This was communicated with the public and protesters at the time, to ensure those being filmed were aware of the situation, and a notice was placed on the council’s website [here].

Approval under The Regulation of Investigatory Powers Act 2000 (RIPA) was never given because the council never agreed to covert surveillance. Amey were asked by the council to film overtly to gather evidence for court.

But campaigners claim “overt filming” is not what the council admitted to in the FOIs. The use of a private investigator, paid for by a public body (i.e. a council) would fall under RIPA rules if it was for what’s technically called directed and covert surveillance. The Facebook post above, and testimony told to The Canary, makes campaigners think the council’s surveillance was directed and covert.

One local resident and campaigner told The Canary that they had been directly targeted by a private investigator. The incident happened around 150-250m away from a felling site. The alleged private investigator took photos of the campaigner’s face, after they removed a scarf they were wearing to conceal their identity. The photographs also included images of their son.

The only reason the campaigner knew that they had been photographed was because the council later issued them with a court summons for breaching its injunction orders on felling sites. The campaigner says the photographs were part of the basic evidence against them to pursue the case. But the case was immediately thrown out by a judge.

If the council was conducting directed and covert surveillance using a private investigator, it did not request authorisation from the government [pdf, p49/50]. This could mean it has broken the law, unless it can prove that it did not pay Douglas H. Savage before and up until 9 October 2017. Or unless it can show that the company was not carrying out directed or covert surveillance.

The makings of a motion picture

Teal summed up the situation by telling The Canary she believes Sheffield City Council may have acted “illegally”:

The partnership between the council and Amey is so enmeshed it appears they’ve lost perspective. It’s no longer clear to them, let alone us, who is responsible for what, and why. They’ve given confused replies to enquiries from journalists, and struggle to be cognisant about the facts.

It’s my belief that they’ve been reckless in their pursuit of campaigners. They’ve misused their powers, perhaps illegally, and now seek to hide the truth. This demonstrates an arrogant and complacent approach to their public duty. As well as a wanton waste of public money. They must be held accountable for their decisions and actions.

Safeguards and assurances given by the council when signing off on the surveillance have not been adequate. There have been disclosures from the protocol to generate media coverage. Also, there has been no oversight and investigation of leaked data. And the reports of people being followed by private investigators acting on behalf of Sheffield City Council raises some troubling legal issues.

The Sheffield trees ‘saga’ has the makings of a motion picture. From private investigators to massive police operations, via redacted documents and some celebrity campaigners, Sheffield has become the eye of a political storm. With the local elections just over a week away, Labour’s position in the city is looking more and more precarious.

Following the publication of this article, Sheffield City Council additionally told The Canary:

No covert surveillance has been commissioned by Sheffield City Council. It is simply not true.

The ‘privacy assessment’ (attached in your article), while similar in style to a RIPA form, merely ensured that privacy issues were covered. This was not RIPA because no attempt at covert surveillance was to be undertaken. This was for overt evidence gathering which the campaigners were explicitly told would take place.

Amey have also undertaken their own surveillance and the councils instruction to them has been that it must always be overt.

This article was updated at 8pm on Wednesday 2 May to reflect the above statement from Sheffield City Council.