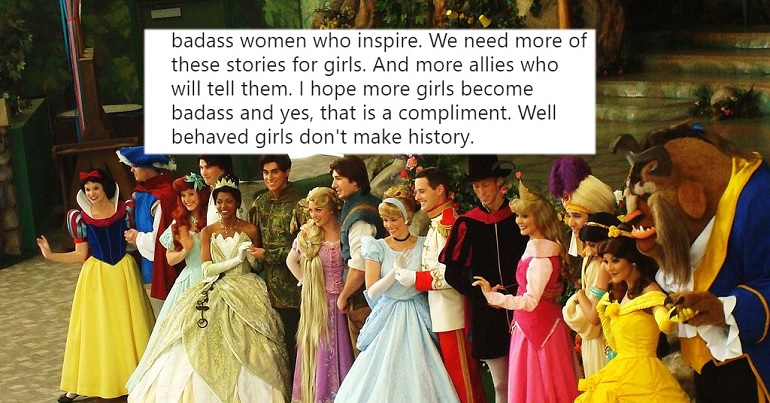 A young girl has shown her anti-princess power by challenging sexist stereotypes at school. And she’s really impressed Twitter users in the process.

TV historian Dan Snow tweeted the following about his daughter on 24 April:

My daughter had a 'medieval feast' at school yesterday. Mostly, the boys went as knights, the girls as princesses.
She went as the Viking fleet commander, 'The Red Girl' briefly referred to in the 12th C 'The War of the Irish with the Foreigners.'

Thank you for teaching your daughter about badass women who inspire. We need more of these stories for girls. And more allies who will tell them. I hope more girls become badass and yes, that is a compliment. Well behaved girls don't make history.

As a historian and a woman, this made me grin like a Cheshire Cat. Inspiring young women through history – we've done some incredible things. I hope she feels she can do/be anything.

Glad times are changing. I did something similar at that age, got told to remember Joan of Arc got burned at the stake, and told to change.

According to National Geographic:

There are also numerous Viking sagas which reportedly talk about “shield-maidens”. And National Geographic spoke in 2017 about how DNA analyses had confirmed that the grave of a famous Viking warrior actually belonged to a female fighter.

The dangers of ‘princess culture’

As Vox has reported, there’s “a long tradition of silenced women in fairy tales”. And cartoon creators like Disney have very much jumped on that bandwagon, pushing harmful princess stereotypes.

The Child Development journal has outlined the negative effects that a ‘princess culture’ can have on young girls. Increased engagement with the culture, for example, can cause girls to conform more to ‘feminine’ stereotypes. And positive effects are limited.

Rebecca Hains – author of The Princess Problem: Guiding Our Girls Through the Princess-Obsessed Years – writes that princess culture often:

suggests that a girl’s most valuable asset is her beauty, which encourages an unhealthy preoccupation with physical appearance. The brand also implies that girls should be sweet and submissive, and should expect a man to come to their rescue in an act of love at first sight.

Researchers from Granada University, meanwhile, have analysed 621 male and female characters from cartoon series and found that women largely served in secondary roles. They also found, according to University of Buenos Aires professor Virginia García Beaudoux, that “most animated women are materialistic, jealous and superficial, obsessed with their bodies and keen to please other people”.

adults must ensure that we do not reinforce negative gender messaging in our daily lives by making girls feel that they are most valuable when they look like pretty princesses.

Girls don’t have to dress up as Viking warriors, though, obviously. In fact, there are much better role models out there.

In recent years, for example, the Kurdish-led Women’s Protection Units (YPJ) have been defending the development of a democratic system in northern Syria – one that is secular, feminist, multi-ethnic, and opposed to religious discrimination. They have been among the most effective ground forces in the fight against Daesh (Isis/Isil).

Young girls and women can also look up to figures like revolutionary artist Frida Kahlo, journalist and explorer Martyna Wojciechowska, and Katherine Johnson – one of the first Black women to work for NASA. And there are plenty of strong women in Britain to choose from, too.

The point is that girls and women don’t need to imagine themselves as princesses. They can be whatever they want to be. So we need to let them dream. And we need to give them the freedom to fight for those dreams.

– Check out some books from the growing ‘anti-princess’ trend. For example:

– Support groups that help women in the UK and around the world. For example: Sisters Uncut, Women’s Aid, Women on Wings, The Fawcett Society, Body Gossip.