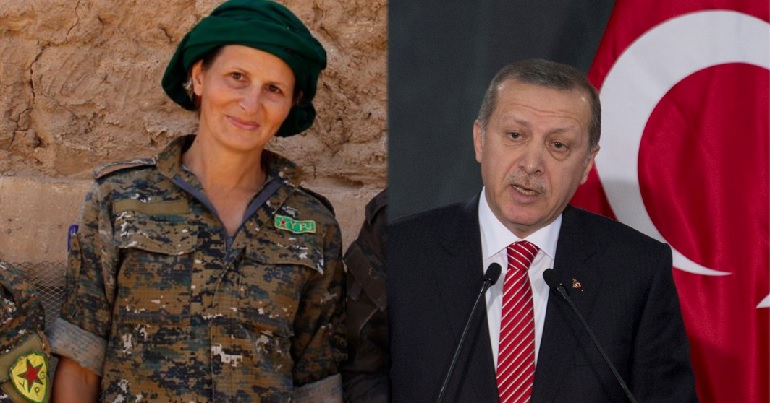 Canadian anti-terror fighter Hanna Böhman has long documented her time fighting against Daesh (Isis/Isil) in northern Syria. Now, she has spoken to The Canary. And she insists:

If we want real peace in the region, we have to stop selling weapons to Turkey

A documentary captured Böhman’s story in 2017. In the film, she describes how she wanted to join the struggle against Daesh, so she joined the Women’s Protection Units (YPJ) – an all-female Kurdish-led force in northern Syria (aka Rojava). Speaking about the YPJ, she says:

Its primary goal is to bring women’s rights to the Middle East.

Turkey’s recent attacks on the YPJ

For much of 2017, NATO member Turkey was visibly gearing up to attack Afrin in northern Syria – a region protected by the YPJ and its comrades in the People’s Protection Units (YPG). And there were numerous alleged Turkish attacks over the course of the year, which reportedly killed dozens of civilians.

Since Turkey ended promising peace talks with the Kurdistan Workers’ Party (PKK) in 2015, it has been fighting against the group and its allies at home and abroad. According to the Permanent Peoples’ Tribunal, the state has committed numerous anti-Kurdish war crimes in the process.

The YPJ and YPG are ideological allies of the PKK. Amid Syria’s civil war, the YPJ/YPG have been protecting the formation of a democratic system in the north – one that is secular, feminist, multi-ethnic, and opposed to religious discrimination. And having proven themselves to be among the most effective anti-Daesh ground forces, they eventually gained temporary support from the US and the UK in the fight against Daesh terror. But because of their indirect ties with the PKK, Turkey is opposed to their presence in northern Syria.

So in spite of defeating Daesh in its Syrian capital of Raqqa only months ago, the YPJ/YPG are now under attack in Afrin from Turkish-backed forces. The regime in Ankara has tried to argue that it is defending itself, but both US and Kurdish officials insisted at the start of the Turkish invasion that there was no evidence that the YPJ/YPG had attacked Turkey. And the BBC has since exposed the reality behind Turkey’s propaganda.

As a YPJ volunteer, Böhman has significant experience and knowledge of the situation and its context. And she told The Canary:

Turkey is afraid of a Kurdish state along the border as it may encourage Kurdish people in Turkey to continue their fight for rights and recognition. The ridiculous part is Turkey was fine with an ‘Islamic state’ at the Turkish border…

For years, Daesh members spoke of “full cooperation with the Turks”. Jihadis reportedly had safe houses in southern Turkey where they stayed before crossing into Syria. There was [paywall] also a “porous” border, through which a “steady stream [paywall]” of jihadis went into Syria. And Turkey consistently failed to cut off Daesh supply lines.

And regarding the recent Turkish-led invasion of Afrin, award-winning journalist Patrick Cockburn said:

In a previous report, The Independent shared a video of these Turkish-backed fighters, and Cockburn explained that:

Syrian Arab militiamen leading the Turkish attack on Afrin… are threatening to massacre its Kurdish population unless they convert to the variant of Islam espoused by Isis and al-Qaeda.

But the alleged links between Turkey’s government and Daesh-style jihadis are nothing new. Columbia University’s David L Phillips is just one academic who has been outlining these ties for years.

Turkey ‘holding the West to ransom’

When asked about the chances of Western governments standing up to Turkey – NATO‘s second-largest army, Böhman said:

[The chances are] slim I’m afraid, mainly due to two things. The US doesn’t want Turkey switching sides to Russia, and the EU doesn’t want Erdoğan [Turkey’s ‘president’] to release into Europe the millions of Syrian refugees he holds hostage in Turkey. Erdoğan uses them as blackmail for EU cash and support.

The view in the corridors in Brussels is that Erdoğan feels he can “turn on-and-off the taps” of refugee flows, effectively holding the European Union to ransom.

And in response to a 2016 EU vote to temporarily halt talks about Turkish membership in the union, Erdoğan said:

If you go any further, these border gates will be opened.

Böhman: for peace in Syria, stop arming Turkey, and speak up!

Speaking to the states that are failing to stand up to Turkey, Böhman said:

The message I would like to send to my government, and all governments that supposedly support democracy, is to start speaking the truth about Erdoğan’s wish to build a fundamentalist Islamic state, and to support the Kurdish-led revolution in Syria. If we want real peace in the region, we have to stop selling weapons to Turkey, and instead start investing in our greatest allies in the Middle East. We need to support the new, democratic model of Rojava. If we want to end the refugee crisis in Europe, we have to help people go home by providing safety and support for new infrastructure, agriculture, healthcare, and education in Rojava. The refugees didn’t want to leave home, and most would quickly return if there was a safe future for them in Syria.

And speaking to citizens across the West about what they can do to help, she insisted:

It’s so simple but few do it. Speak up! Just say something. Tell your friends and neighbours. Tell your political representative. And tell as many people as you can about the revolution in Rojava and how they are fighting to achieve all that we in the West have taken advantage of for so long. That’s all they want. Just a chance to have safe and happy lives.

So for all those who truly want peace in Syria, we must listen to Böhman – and demand that our governments stop selling weapons to Turkey. Because as long as those sales continue, our governments are effectively giving Turkey a green light to keep attacking the very people who are on the frontline in the fight against Daesh. And that is utterly unacceptable.

– See the full documentary – Fear Us Women – about Böhman’s story. And see her and Oscar-nominated director David Darg speak about the film here.

– Read the author’s book: Rojava: An Alternative to Imperialism, Nationalism, and Islamism in the Middle East (An introduction). Also see his recent opinion piece: Britain is supporting a terrorist regime. It’s time to say ‘enough!’

– Write to Theresa May and your MP. Ask them to urge Turkey to stop its war on Afrin, to resume peace talks with its internal opponents, and to release all political prisoners. Until that happens, ask them to cancel and stop approving arms sales to Turkey; and support Campaign Against Arms Trade to help make that happen. Also support Peace in Kurdistan, the Kurdistan Solidarity Campaign, and attend one of the emergency protests if you can.

– Read more Canary articles on Turkey and Afrin. Also watch our recent interviews with people who have witnessed the current situation in Turkey and northern Syria first hand.