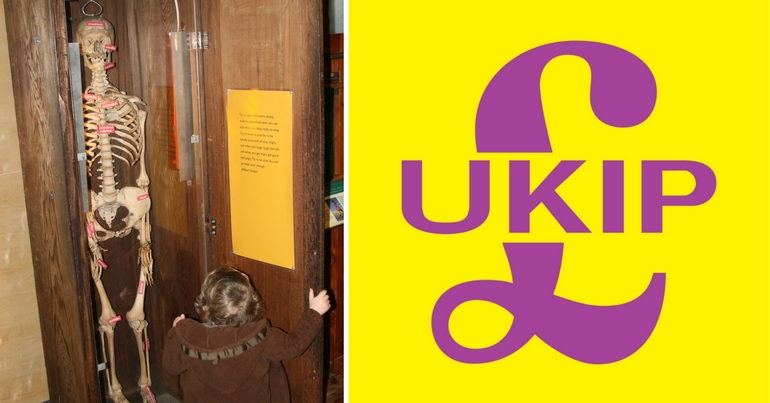 UKIP is hailing its “remarkable” achievement in standing “over 530” candidates in local elections on 3 May.

The achievement is slightly less remarkable when it’s revealed that the party will be standing in just 12% of all seats. But actually, UKIP should be congratulated for managing to find 530 people willing to stand. The party seems to be doing everything it can to reinforce the view that it’s “virtually dead“.

You won’t win – well, not in most places – but UKIP candidates remind the Government that we are still here it is and that we are watching them.

And the party doesn’t seem to have much faith in its candidates’ principles, telling them:

Don’t be frightened by Remainers into disowning your own politics.

“On the edge of collapse”

But at least UKIP candidates will know who to blame when they fail to win seats. The party does a fine job of putting itself down. Its website says:

Just six weeks ago UKIP was thought to be on the edge of collapse.

And it seems keen to labour the point about internal difficulties, referring to the recent libel case against a UKIP MEP. UKIP faces a bill of at least £200k in the case, about which it says:

On 17th February UKIP was on the edge of insolvency and in imminent danger of being forced out of business.

“Not out of the woods yet”

And although the party claims that a lot of money was raised and that the legal bill has been paid:

…the party is not out of the woods yet. It has to maintain its income and manage itself carefully. It also potentially faces a second legal bill in the libel case in the months to come.  But we will cross that bridge when we come to it.

Potential candidates should take heart, however, because:

Six weeks ago we had no local election campaign planning in place.

DIY leaflets and skeletons in cupboards

And now? Well actually, it’s still not clear if there is any election campaign planning. Candidates can download a DIY UKIP leaflet. There’s an official UKIP Youtube channel. But that only has two videos that are less than several months old. There’s an events page although it doesn’t contain any upcoming events. Candidates are pretty much left on a ship without a crew.

In the end, though, it’s impressive that UKIP found over 500 candidates who could pass the rigorous vetting procedure. Those wishing to stand for election are required to declare that:

I do not have any ‘skeletons in the cupboard’ that may cause me or UKIP embarrassment if they were to come out during the election.

But potential candidates should not be put off. Things UKIP apparently doesn’t consider skeletons include:

All in all, it’s a pretty low bar to jump. We should be grateful that only 530 people managed to get over it.