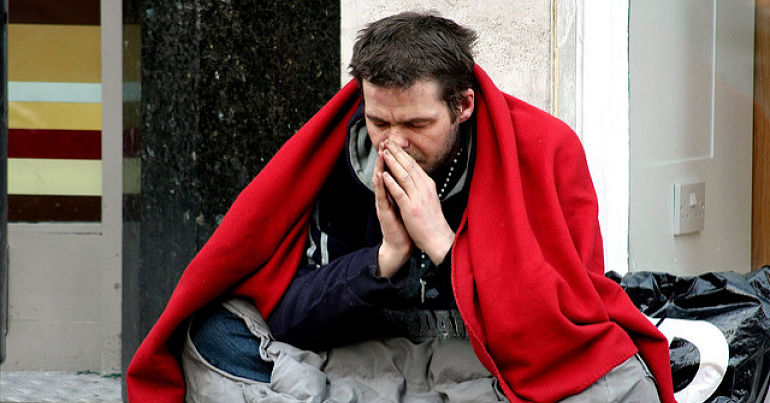 The Homelessness Reduction Act (HRA) became law on 3 April. The Act is based on the work of an independent panel of experts established by the homeless charity Crisis. It is the most significant change to statutory homeless policy in England since it was first introduced in the 1970s.

But the Act continues this government’s faith in a private rented sector which is now the biggest cause of homelessness. The legislation is therefore not the miracle cure that some are declaring it.

There is one main difference between the HRA and the previous homelessness legislation. The HRA places [pdf, p7] a new duty on local authorities to “intervene at earlier stages to prevent homelessness in their areas”. The Act creates a new ‘prevention duty’ which extends the time someone is threatened with homelessness from 28 to 56 days. Within this time a local authority must [pdf, p9]:

take reasonable steps to help prevent any eligible person (regardless of priority need status, intentionality and whether they have a local connection) who is threatened with homelessness from becoming homeless. This means either helping them to stay in their current accommodation or helping them to find a new place to live before they become actually homeless.

A lack of social housing

It is widely accepted that lack of social housing is one of the key factors contributing to the meteoric rise of homelessness since 2010. This government built just 5,380 social homes in England in 2016/17, down from 39,560 in 2010/11, an 86% decline. Additionally, it’s continuation of “Right to Buy” is reducing housing stock further. Research by Inside Housing estimates that 40.2% of properties sold under “Right to Buy” are now owned by private landlords. It is therefore not surprising that the proportion of households renting privately has doubled over the last decade. This is a worrying statistic as evictions from private sector tenancies account for 78% of the rise in homelessness since 2011.

Due to this shortage, local authorities are required to give “reasonable preference” to people who are homeless or threatened with homelessness when allocating social housing. This means that, especially in big cities where demand is highest, making a homeless application is the only route into social housing. Outside of sitting on a council waiting list for 50 years.

What is homelessness prevention?

Homelessness minister Heather Wheeler declared that the HRA is, “the most ambitious legislation in decades that will mean people get the support they need earlier”. Big Issue founder John Bird echoes this view, arguing, “Prevention is the best of all cures ever invented.”

Being accepted as homeless will only result in PRS [private rented sector] accommodation and will not be likely to result in an offer of social housing.

Additionally, the Localism Act allowed councils to introduce stricter regulations around who is eligible for social housing. For example, the north London borough of Barnet cut its housing waiting list from 16,103 households to 815 through introducing a rule that households must have lived in the borough for five years continuously.

In response to these changes, Giles Peaker, housing lawyer and author of the blog Nearly Legal, argued that the government’s vision is of “a complete separation between Part 7 [homeless application] and social housing”. The HRA enshrines this vision.

The 56-day “prevention duty” means local authorities will palm people off to the private sector even more regularly. In Southwark, where the Act has been piloted for over a year, there has been a 66% increase in the numbers placed in the private sector to prevent homelessness than under the previous legislation.

The rise in homelessness lays bare the devastating impact that expensive and unstable private renting is having on people’s lives… In the long-term, the only solution is to fix our broken housing system by building the genuinely affordable homes we so desperately need.

But using the private sector as the main housing solution is preventing local authorities from building new homes. A report by the National Housing Federation estimated that private landlords received £9.6bn in housing benefit in 2015. This money is sucked straight out of the public sector. Research by the Green Party estimates that good-quality social housing can be built for around £100,000 per unit. Even if half of the £9.6bn was paid to local authorities, it would provide funds to build roughly 48,000 homes. Local authorities built 1,840 new council homes in 2016.

Furthermore, the figures do not even take into account the huge cash incentives many local authorities pay private landlords to take tenants. This government’s seven successive years of cuts to housing benefit rates mean affordable private rents are few and far between. An anonymous local authority housing officer told The Guardian:

Much of this accommodation is expensive and of very low quality because the landlords know they can play one desperate council off another. Homelessness is a nice little earner for slumlords.

The HRA also does nothing to make the private rented sector more hospitable for those forced to live in it. Critically it does not make tenancies secure.

The right to evict gives landlords enormous power over their tenants. Many tenants don’t even know they exist until a two-month notice to quit arrives through the letterbox; if valid it cannot be appealed. It has also allows the worst landlords to ignore disrepair – they can simply kick out tenants who complain.

In December 2017, the Scottish Parliament passed sweeping reforms to tenant’s rights, creating a new “private residential tenancy”. These reforms have ended “no-fault evictions” and have limited rent increases to once every 12 months.

In contrast, the HRA actually reduces people’s security of tenure. It allows [pdf, p114] local authorities to discharge duty through an offer of a six-month tenancy; half the Localism Act’s provision [pdf, p3] of 12 months. Therefore, it is no wonder charities are warning the act does nothing to combat the underlying causes of homelessness.

Homelessness doesn’t just appear out of nowhere at random. It is caused by multiple structural problems. Chief among them is an unregulated, expensive private rented sector. However, the HRA ignores this. The act continues the short-sighted tactic of using private rents as the main solution to homelessness. It is like pushing people into a revolving door with no exit.

Stephanie Cryan, deputy leader of Southwark council, has warned that the HRA could become “the sticking plaster on the severed artery”. Without any significant structural change, it can only hold the tide for so long.