The Jewdas f**k capitalism beetroot is for sale. And it's the tastiest possible response to the Daily Mail - Canary Workers’ Co-op 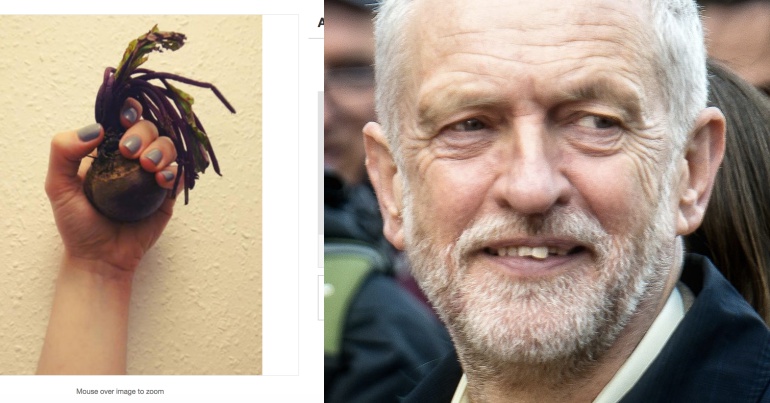 As The Canary previously reported on 2 April, the right-wing media – led by Guido Fawkes – launched an attack on left-wing Jewish group Jewdas. This was because the Labour leader Jeremy Corbyn had attended the group’s Seder (a traditional Passover feast) in Islington.

Since then, support for Jewdas has grown. At the time of writing, the group has over 21,000 followers on Twitter and over 10,000 followers on Facebook. And its latest move involving an ‘anticapitalist beetroot’ is just delicious.

After Jeremy Corbyn attended Jewdas’s Seder, the Daily Mail was so outraged it ran a story with the headline:

That same beetroot is now for sale on Ebay. And it’s attracting a lot of interest:

We are auctioning off an ORIGINAL AUTHENTIC JEWDAS SEDER BEETROOT to raise money for @babelsblessing who teach english to refugees in London https://t.co/R3pinvnbfN

With five days to go on the auction, the “Anticapitalist beetroot – Jewdas 2018 seder (pickled)” has 84 bidders and the current price is over £32,000. The listing states:

This is an authentic beetroot that was present at the Jewdas 2018 seder, and later memorialised in a Daily Mail headline. It is currently in our fridge.

We will be pickling the beetroot and sending it to YOU for you to enjoy. Feel free to raise it in the air and say whatever you want before/after/during consumption.

So not only has Jewdas ignored the Mail‘s outrage, it’s using the infamy of this beetroot to support refugees. Poor Daily Mail.

The beetroot has become quite a powerful symbol in just a week:

Rav Geoffrey explained: When the Israelites crossed the Red Sea and reached the other side, Miriam and the women raised their beetroots in the air and shouted fuck capitalism pic.twitter.com/5I0HXRpuMY

Best thing at our Seder?

In addition to the anticapitalist beetroot, there’s also an auction for the authentic “Jeremy Corbyn allotment maror”:

Last week, Labour leader and general comrade Jeremy Corbyn came to our seder and very kindly brought some maror (horseradish) from his allotment. Some was left over (because there is always leftover maror, the point is that it is not very nice), and it is currently in our fridge in a ziploc bag.

In its own words, Jewdas:

fulfil our role of being the voice for Anglo-Jewry by writing funny tweets, holding great parties and passing on the memes which we receive from God, via Geoffrey Cohen.

But the group has a more serious role. Jewdas has been “campaigning against antisemitism on the left and the right for many years” and said:

We are unhappy with the pervasive antisemitism that still remains on the Left but continue to remain very much involved because we are committed to a better world and a better Left, and believe that the only way to tackle antisemitism is to keep fighting for our rights in the diaspora.

Jewdas also believe that challenging the ongoing Israeli violence towards Palestine is categorically not antisemitic. The group “believe it is possible to criticise Israel WITHOUT being antisemitic”, and has written a guide to support this. It quickly established that it does not support the genuine antisemitism that conflates critique of the Rothschilds with Judaism, stating:

Sorry to all the Kahanists and Rothschild conspiracy theorists whose messages we haven’t answered yet. We’ve all been having awkward conversations with our mums.

We will take down the office of the Chief Rabbi. It was created in 1911 by the Government as a way to control Jews. Its inherently anti-Semitic & colonialist, & dont recognise equality of denominations. This will be replaced by a Rabbinical Soviet w oversight from shul committees https://t.co/JI8znp8dHN

To celebrate getting more followers than @BoardofDeputies, we will be applying for a seat! We have a few changes in mind though…

As Jewdas member Hannah Gold said, the group unites Jewish people who are:

also the sort of people who dream of a better world, who refuse to tolerate oppression, who stand for liberation and justice for all.

Thanks to Guido Fawkes and The Daily Mail, support for Jewdas is soaring, and it looks set to raise a considerable sum to help refugees.

Here at Canary towers, we hold our beetroots high and shout “F**k capitalism”. Jewdas, we salute you.

– Support Jewdas. And if you’ve got a bit more money, why not bid on the beetroot?