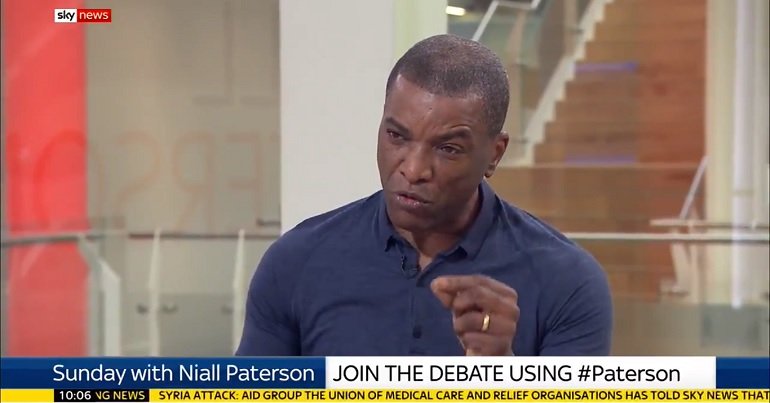 Crime and policing have been in the headlines this week. Figures showed a spike in violent crime in London, with 50 murders taking place so far in 2018.

The government has been quick to respond, bringing legislation to parliament which will tighten controls on weapons. Likewise, Labour has come out strongly in condemning cuts to police numbers, which it believes has contributed to the rise in violent crime.

The state acts to “stereotype, stigmatise and criminalise” young people

But in a powerful interview on Sky’s Sunday with Niall Paterson, Tottenham based activist Stafford Scott slammed state action from both government and the police. Throughout the interview, Scott argued that decisions taken by the state are behind the crime spike.

The state is using every single agency that it has… to stereotype, stigmatise and criminalise these young people.

He elsewhere argued that government policies have put further pressure on young people through this stigmatisation and stereotyping:

Today, this government is telling us that three youths can be a gang. I have two brothers. I come from a place called Tottenham. That means that these people today would define myself and my brothers as being members of a gang. Once you’re stereotyped as being a gang and stigmatised, you’re just pushed out onto the streets.

More police will cause more reaction

Scott’s criticism went further. He condemned claims that heavier policing will reduce violent crime. In two separate responses, he argued that higher police numbers, as Labour have been calling for, won’t solve the problem:

"Do you really think the kids are sitting at home this morning watching this programme to learn there's fewer police and then thinking as a result of that 'we are going to go out there and do something'?" #Paterson #knifecrime pic.twitter.com/6EOePk33Zu

"They didn't call skinhead violence white-on-white crime"… so why are they calling this "black-on-black crime"? – community activist says racism and labelling is playing a role in toughness of police measures #Paterson pic.twitter.com/0yP8F3UlRW

After the interview, Scott then took to Twitter, taking on those who responded to his comments and breaking down common misconceptions about violent crime.

First, he tackled the myth that violent crime is a product of single-parent households:

It is most definitely NOT an issue that effects single parent households. I have met with young people who live with both parents yet are at the ‘cutting’ edge of this madness. To address the issues we must unite not divide the community 🙏🏾 https://t.co/KQuBQm2dpS

Then he went on to lay into Government cuts to services:

Cutting funding to society’s most vulnerable in the name of austerity, whilst the bankers are still swilling at the pen, is a corrupt practice that central, regional and local Government should be ashamed of but ultimately held accountable for 🙏🏾 https://t.co/LALItc0ods

And he also reserved some criticism for the way the mainstream media has hosted the debate:

My brother this is why we are in this predicament in the 1st place. Make no doubt about it we ARE treated as a SUSPECT community by the authorities, thats why they do not invite us to sit around the table, as they do not understand COMMUNITY & therefore see us as part of the gang https://t.co/WXXOAtvH5v