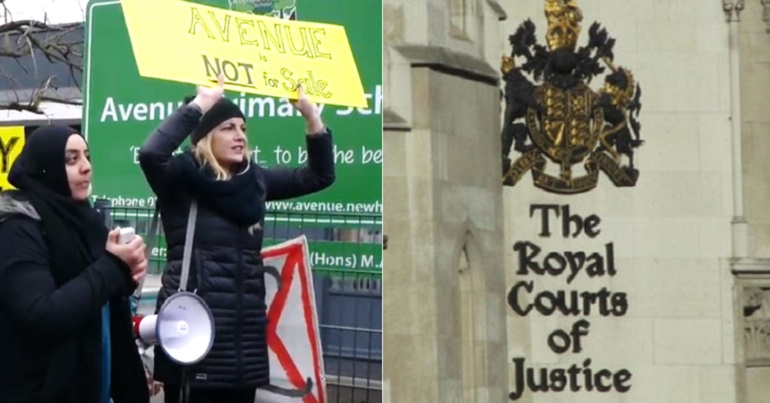 A group of parents has been granted a judicial review of a primary school’s plans to become an academy.

Parents of children at the Avenue Primary School in Newham, east London, have been campaigning for months over the school’s plan for ‘academisation’. The proposals would see the school join the EKO multi-academy trust. The school says it has tried to “engage in a meaningful dialogue” with both parents and teachers over the plans.

But parents and staff disagree. They have been holding walk-outs and ‘strikes’ since 2017, with occupations and protests happening at the school throughout April:

The #NewhamSchoolStrike against academisation is ongoing – Day 6 for Cumberland, Day 14 for Avenue and tomorrow Acton High. When will MATs realise that educators, parents, young people and communities don't want their schools privatised? @AvenueParents @ParentsE16 pic.twitter.com/ocBwDvm99o

Beautiful day, beautiful picketline at Cumberland Secondary in #Newham. This is day 6 of strike in resistance to academisation of the school. Hands off our schools! The are ours not the property of private companies. #NewhamSchoolStrike pic.twitter.com/i2QmW1F6zL

Avenue Primary occupied by parents! Simple – give the staff and parents a ballot and the strikes will stop. Avenue leaders need to realise Avenue is a community school and not a private asset. #NewhamSchoolStrike @NUTLondonOffice @antiacademies pic.twitter.com/OiyqUbfVRt

As The Canary previously reported, the action at Avenue Primary School is part of a coordinated campaign across three schools in Newham facing academisation. But Avenue parents have taken their fight one step further.

The High Court has granted parents a judicial review of the school’s academisation plans. As solicitors for the parents, Leigh Day announced the school’s plans will have to be put on hold while the review takes place. Solicitor Rowan Smith said:

The granting of a judicial review is excellent news as it affords parents of children at the school, who have grave concerns over the switch to academy status, the opportunity to air their views fully and openly in court. The review is likely to take place in the second half of June.

In February, a spokesperson for the school told the Newham Recorder:

The school and its governing body has sought to work with its parents and local school community through the consultation process. It is certainly not in the best interest of the school to be in dispute with its parents.

It is disappointing that despite the best efforts of the school and the council to engage in a meaningful dialogue with the union they are committed to strike action, which disrupts the education of our young people and causes damage to our school’s reputation and the teaching profession…

We, along with other parents of Avenue primary school in Newham are fighting for justice. Justice for… our children’s education, which we feel is being compromised and will continue to deteriorate.

We are questioning the reliability and transparency of the school’s governing board, which made a major decision to convert our community school to academy status… without adequately engaging or consulting parents.

The law requires proper engagement with stakeholders (including parents) via a lawful consultation that takes into account their views, and which has due regard to the needs of protected individuals, such as children with special educational needs.

We do not consider the governors have complied with those requirements and that is why we wholeheartedly welcome the granting of a judicial review, at which we will be voicing our concerns and those of the majority of other parents of children at Avenue primary school.

There seems to be a real anger on the ground over the school’s plans. So much so, that the Labour council has even come out in mild support, passing a motion backing schools against forced academisation. At a time when school funding is being cut, the quality of a child’s education should be paramount. In the case of Avenue primary, parents have concerns which the school will now be forced to listen to.

– Support and donate to the parents’ crowdfunder.