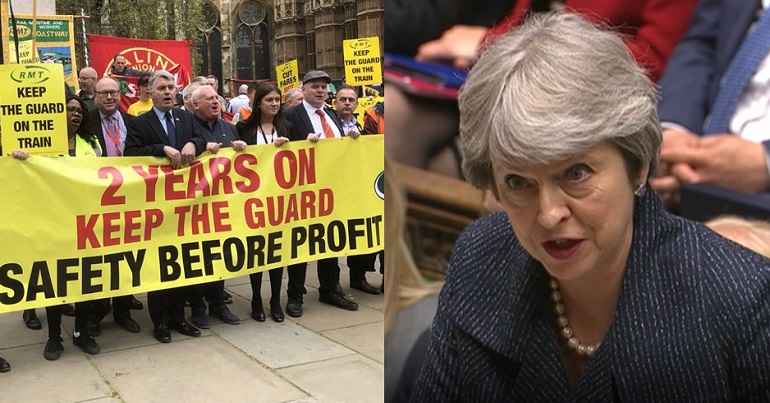 A trade union took an ongoing dispute to right outside Prime Minister’s Questions (PMQs) on Wednesday 25 April. And in a fight that’s gone on for two years, it seems the workers are not prepared to cave in to pressure from corporations.

Currently, several train companies are caught up in industrial action with the National Union of Rail, Maritime and Transport Workers (RMT). So on Wednesday 25 April, it took its concerns right to the heart of parliament. It had organised a rally called ‘Keep the guard on the train’, in protest over the decisions of several train operators to move to ‘driver-only operated’ (DOO) trains. These will see the loss of guards on services, with the driver often being the only member of staff on a train.

The RMT is not happy about this. So its members, campaigners, MPs, and supporters held a rally opposite parliament. Beginning at 11:30am and continuing throughout PMQs, scores of people came out to show their support for keeping guards on trains: 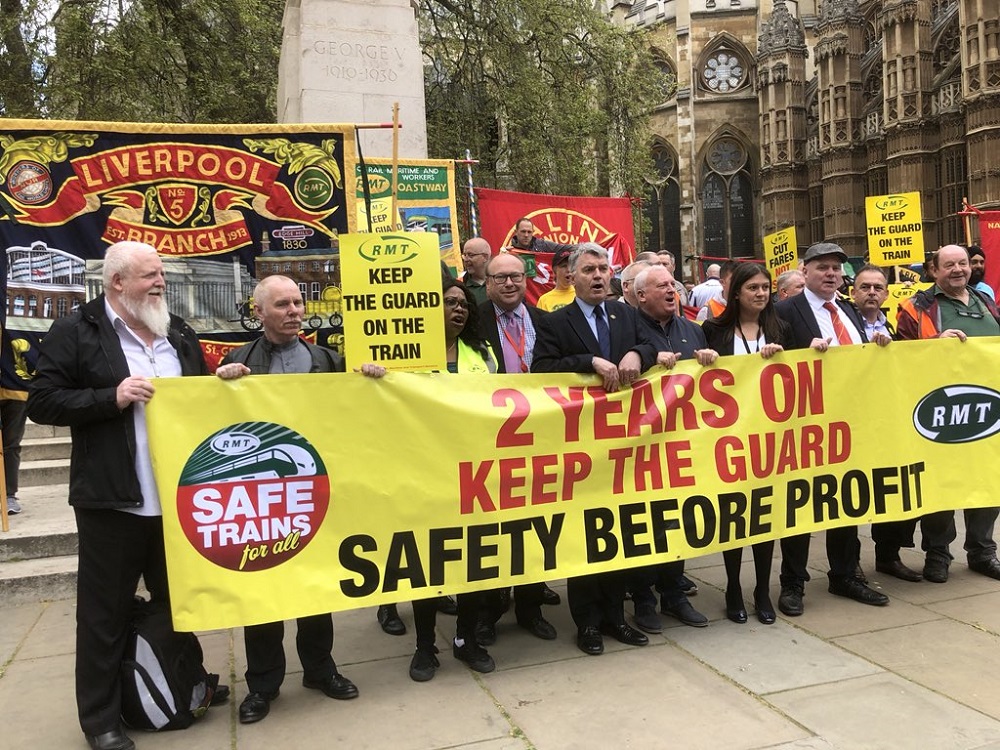 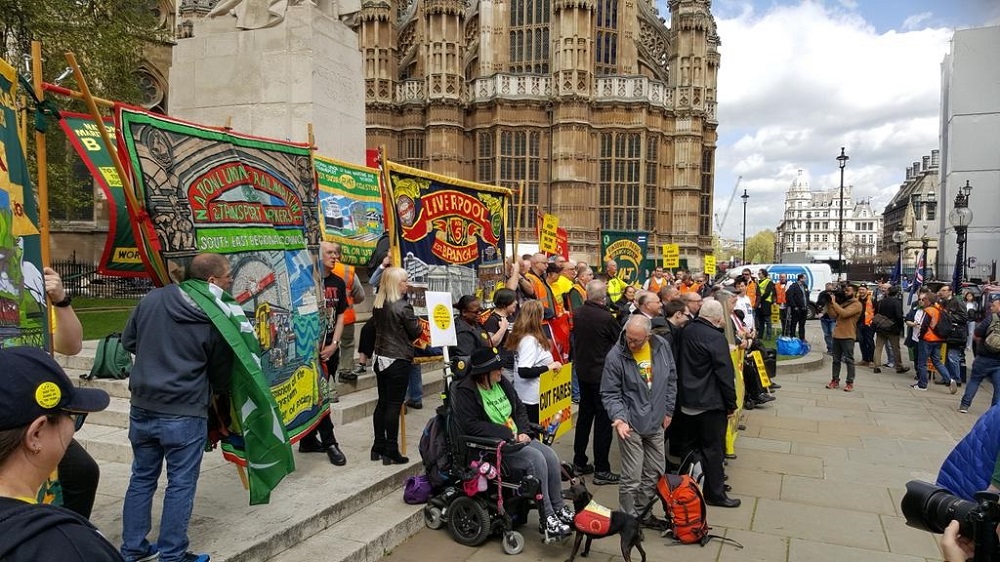 It wasn’t just workers directly affected by DOO that came out to support the RMT. Disabled people, who are concerned about the cutting of guards, also showed solidarity: 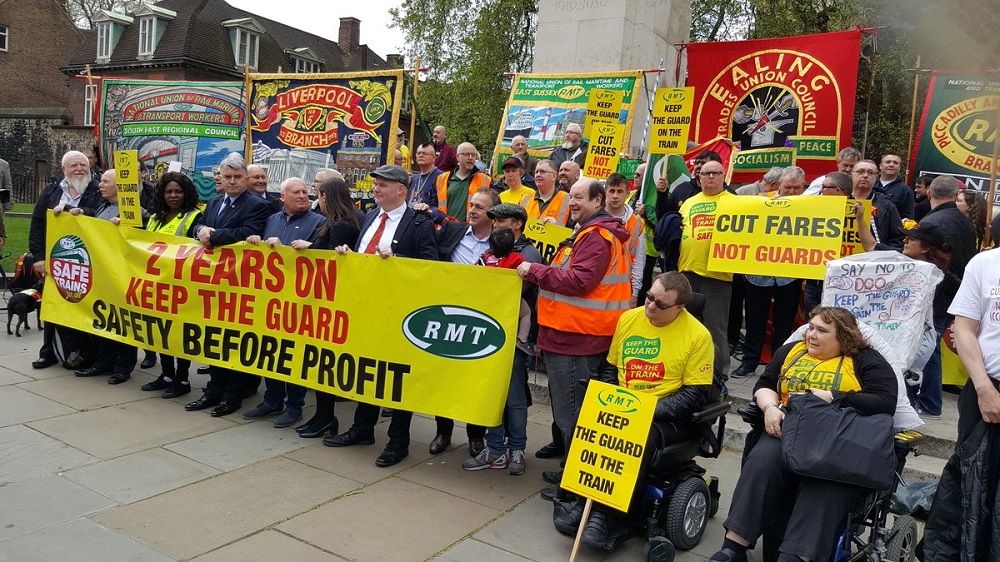 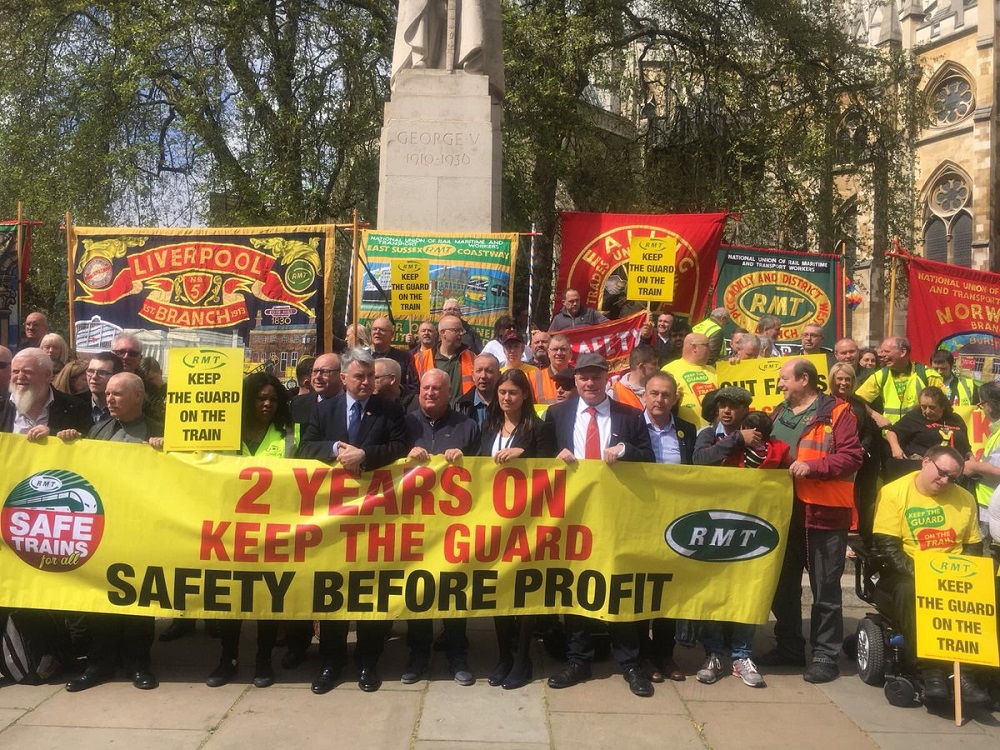 After the rally, there was a debate in parliament, with MPs showing their support for the RMT action:

Labour Party Chair @IanLaveryMP supports @RMTunion being prepared to stand up and be counted. #KeepTheGuardOnTheTrain

We have long detected the dead hand of the Government interfering to stop us reaching negotiated settlements… and it’s about time Chris Grayling stopped playing politics with passenger safety and started taking the issue seriously.

As The Canary has been documenting, some train companies are introducing DOO. The RMT and campaign groups have been warning about the risks of scrapping guards. For example, disabled passengers would have to book support 24 hours in advance to get on and off trains. The groups claim this would breach the Equality Act 2010.

The RMT also has broader concerns over DOO, claiming it will compromise safety. It points to the fact that, currently, both drivers and guards protect the safety of the train. This is because rail operators have trained guards, not drivers, on how to secure the doors safely, protect the train, and act in emergencies. The union also says that independent inquiries have repeatedly stated that trains must have staff on board who are trained in protection and evacuation procedures.

Southern Rail, one of the train operators embroiled in the industrial dispute, has defended DOO trains. It previously told The Canary that disabled passengers can still turn up without notice and expect support – but that by booking in advance, the railway can give them additional assistance. It also says drivers have been trained on how to secure the doors safely, protect the train, and act in emergencies.

Cash said of the planned strikes:

The RMT rally marked two years since the beginning of the DOO dispute with Southern Rail. But with train companies arrogantly unwilling to stand down and the government in their pockets, it looks like this battle over the most basic access and safety issues on our rail network is going to run and run.

– Read more from The Canary about our rail network and support the Association of British Commuters, fighting for everyone’s transport rights.

Featured image via Cat Cray and BBC Daily Politics – BBC iPlayer and additional images via Cat Cray, the NSSN and Unite the Resistance