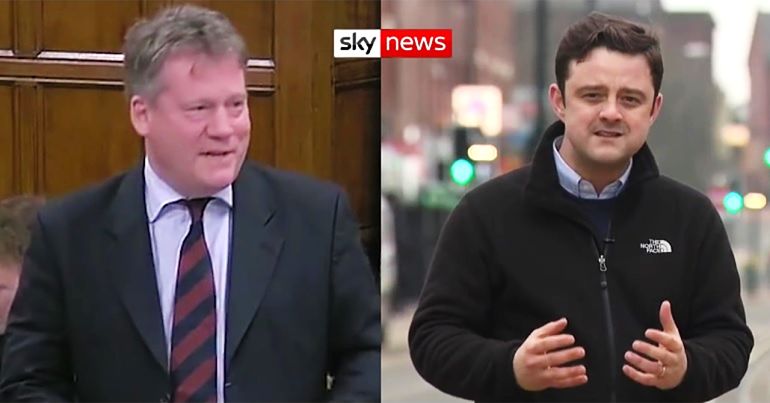 A Conservative MP recently claimed that homelessness is “appealing”. But Sky News made him eat his lousy words. Because it released a “heartrending” video that proved how unappealing homelessness truly is.

‘Rough sleepers have it good’

The MP for Gravesham in Kent, Adam Holloway, led a debate on homelessness in parliament on 24 April. During the debate, he suggested rough sleeping was preferable to some other situations. Firstly, he said:

Holloway chuckled after that statement. He told MPs he had slept rough for a television programme in February. He claimed to have visited a hostel as part of that experience. Again, Holloway suggested rough sleeping was a better option than shelter at a hostel:

When I left there I was quite relieved… I can completely see how… if you’re able-bodied and of sound mind it would be much more appealing to sleep under the awning of St Paul’s Church in Covent Garden because there you have freedom.

Holloway also made it clear that rough sleeping wasn’t, however, quite as “appealing” if you are elderly or living with addiction and mental health issues.

Rough sleepers don’t have it good

Heartrending. Watch this clip about a homeless 19-year-old. He looks so desperate. When he asked for help he was told to ring a hotline.

Meanwhile, Tory MP Adam Holloway said today "We have to accept that some people are able to sleep rough because there are resources to do so." pic.twitter.com/XykZVmuj2l

Sky News spoke to anti-cuts campaigner Charlotte Hughes in its report. She holds a weekly demonstration outside the job centre in Ashton-under-Lyne, where she gives out advice and food.

While Hughes talked to Sky News‘s Tom Rayner, a young man called Ryan Abrahams approached. He’s 19 years old, homeless and was obviously in a state of distress. He told Rayner that he’s been unable to find homelessness support and cannot receive benefits because of his living situation. He explained:

Everywhere I go, they tell me that I’ve been homeless for this long and I’ve managed to keep myself alive this long, so… I can last a few more months on the streets. And they… just don’t get back to you after that.

I’ve got no phone. I’ve got no access to internet. I can’t search for jobs online. I can’t get my CV printed out because I’ve not got the money to do so. I’ve not got any of the things that you needed for a job. I just, I don’t know where to go from here. I’m lost.

As writer Alex Nunns said, Abrahams’ story is “heartrending”. And he may end up one of the ‘lucky ones’ after telling it. Because Sky News is now trying to find Abrahams after viewers expressed concern for him. And it says football club Ashton United and employment minister Alok Sharma are also keen to help him.

Sharma has consistently voted for benefit cuts, including ones that affect housing, since becoming an MP.

But the government itself estimates [pdf p3] that there are over 4,700 people a night sleeping rough in England. That’s a 169% increase since 2010 when the Conservatives came to power. Tragically, at least 78 people who were rough-sleeping died on the streets last winter.

So there are thousands of unnamed people also rough-sleeping in England. There are thousands more who are homeless, living in temporary and insecure accommodation. And, contrary to what Holloway says, it’s unlikely that any of them – including Abrahams – find homelessness appealing.

But then, of course, Holloway would say that. Because his government’s choice to systematically dismantle the welfare state and our support systems is largely why these people are sleeping rough in the first place.