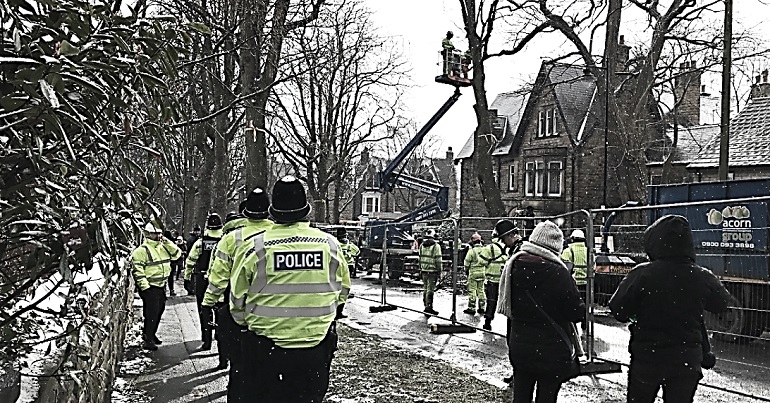 There were extraordinary scenes in Sheffield on Tuesday 27 February, as local residents reportedly faced off with over 30 police officers, private security and heavy plant machinery. The reason? They were trying to stop public trees being cut down.

Tree-huggers? Not on your nelly.

Sheffield City Council is chopping down public trees in the city. But local residents aren’t happy because of the environmental impact, the “Thatcherite” behaviour of the Labour council, and public health. So they came out in force on 27 February to oppose the action:

It’s a good day for criminals in Sheffield as it seems the majority of South Yorkshire police are stood around watching a tree being cut down. #SaveSheffTrees pic.twitter.com/6GNrpdbomC

Residents were angry with private security:

Getting nasty. Old man being pulled.@ameyplc workers joking about having a tape alarm.

One made the number of police 32:

The trees are being felled on Thornsett Road, Sheffield. Might Is Right in the Private Finance Fiefdom of Sheffield. #SaveSheffTrees pic.twitter.com/DZ5WVRG6Mq

Someone else was unhappy as well:

But there is more to this story than just tree felling. Because it’s a tale of outsourcing, court orders, and a Labour council ignoring its citizens.

In 2012, the council gave outsourcing company Amey the contract for street maintenance; and therefore tree care. But STAG claims that Amey has ignored 30 years of agreements on street trees. The council based the agreements on consultations with local communities. STAG says, however, that the felling is more about “maximising Amey’s profits”.

Since 2014, residents have been protesting about the planned felling of trees. But after a series of demonstrations, one of which saw two pensioners arrested and 12 police officers present to protect the council’s work, the Labour-led authority took protesters to court. And on 15 August 2017, the judge in the case ordered a group of protesters to be barred from taking “unlawful direct action” or from “encouraging others to take direct action” against the tree felling. After the ruling, the council said that anyone who tried to protest “inside a safety zone” around the tree felling area would be in contempt of court and face the risk of a fine or imprisonment.

But a judge later clarified the previous ruling, noting that any action would only be unlawful if protesters went through an “unbroken barrier” on public land.

As The Guardian neatly summed up:

It has been a cat-and-mouse game since, with protesters becoming savvy to ways they can legally protest. They talk of ‘geckoes’, who try to cling to walls that are right up against, but outside, safety barriers, and ‘gnomes’, who sit in private gardens overhung by street trees, but again outside safety barriers. Then there are the ‘bunnies’, who dare to hop over the safety barriers and break the injunction; they often wear masks.

Things quietened down after reaching “fever pitch” in January, but the felling resumed on 26 February, as did the protests. It’s quickly becoming clear that residents are not going to let more of their trees be destroyed without a fight; even when faced with over-the-top policing, a corporate giant and its private security, a seemingly immovable Labour council, and court rulings.