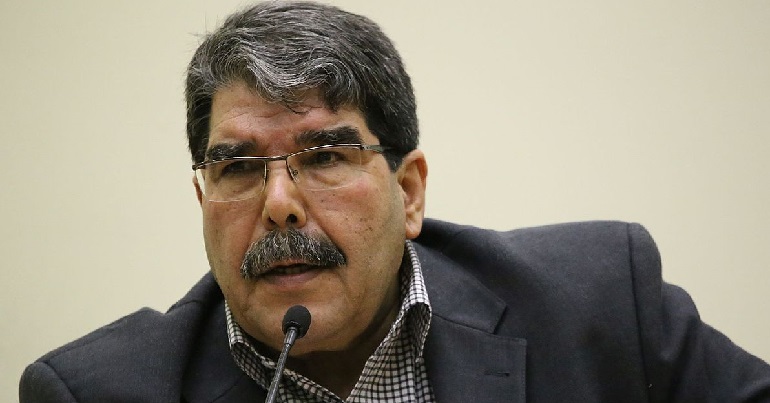 Salih Muslim is a former co-chair of the Democratic Union Party (PYD). This is the main party in northern Syria, where Kurdish-led communities have been building a multicultural and feminist democracy amid the country’s civil war. Their People’s Protection Units (YPG), meanwhile, have been leading the fight against Daesh (Isis/Isil) for years. Even the West recognises them as some of the most effective anti-Daesh ground forces; and both the UK and the US have given them increasing strategic support since late 2014.

However, Turkey has now been attacking the YPG for weeks, reportedly killing over 100 civilians in the process. Critics have called this a campaign of “ethnic cleansing”.

And it’s in this context that Turkey has asked the Czech Republic to extradite Muslim. It claims he’s a ‘terrorist’, and reportedly offered around £715,000 for his arrest. Czech authorities arrested him on 25 February. On 27 February, a judge decided it wasn’t necessary to keep him in custody, but Muslim’s lawyer insisted that “proceedings have only started”.

The PYD and its allies condemn all attacks on civilians.

“Accusations against him are false”

[email protected] is a man of integrity working for peace in an unrelentingly volatile region. His arrest will jeopardize any hope for the peace process & reconciliation in the region. Dialogue must be pursued in seeking a resolution. #FreeSalihMuslim #TwitterKurds pic.twitter.com/5jLnWZ2A49

Working with @SalihMaslem in Brussels 2016 and Glasgow 2017. Neither Belgium nor the UK took Turkey's nonsense demands to arrest him seriously. Disgraceful Czech government have caved to Erdogan. #FreeSalihMuslim pic.twitter.com/tkQcs6fmy2

Independent journalist Wladimir van Wilgenburg, meanwhile, has called the accusations against Muslim “false”, and an attempt to “silence” him:

Talked about arrest of @SalihMaslem on DW from Kobani his hometown and explained Salih Muslim is a politician/civilian & even went to Turkey himself. So accusations against him are false. pic.twitter.com/v48YXQtYyl

Second interview on @SalihMaslem arrest from Kobani, Salih Muslim's hometown. Most likely his arrest to do with Turkish attacks on Afrin. Turkey wants silence over Afrin's civilian casualties pic.twitter.com/QSsgh05q9V

There have also been protests in London calling for Muslim’s release:

OUTSIDE CZECH EMBASSY in LONDON! "We Are Salih Muslim! Salih Muslim is Us!" #FreeSalihMuslim pic.twitter.com/DETbxcdkcB

It remains unclear what evidence if any Turkey has… The move is a further sign of how Turkey’s ruling Justice and Development Party has abandoned efforts to make peace with its Kurds… [and reverted to] criminalizing their political leaders.

In a recent interview, Muslim himself told her:

everyone knows the issue is political.

Indeed, since Erdoğan ended a promising peace process in 2015, his government has arrested democratically elected politicians and thousands of political opponents. And Muslim definitely fits the bill of a political opponent:

Turkey accused of recruiting ex-Isis fighters in their thousands to attack Kurds in Syria | The Independent https://t.co/lbI1g00jnj

Syria: Civilian Deaths in Turkish Attacks May Be Unlawful https://t.co/ikULoeYFuW

Muslim has also shared tweets portraying Erdoğan as a murderer and “children killer“. And we all know how Erdoğan’s Turkey, a human rights abuser which Reporters Without Borders has called “the world’s biggest prison for the media profession”, hates criticism. But if such criticism is too much for Erdoğan to handle, perhaps he should stop attacking civilians – or better yet, end his invasion of northern Syria altogether.

The Czech Republic, meanwhile, is setting an incredibly worrying precedent – essentially allowing Erdoğan to extend his crackdown on dissent to European soil. And we mustn’t stand for it.

– Write to Theresa May and your MP. Ask them to urge Turkey to stop its war on Afrin; to resume peace talks with its internal opponents; and to release all political prisoners.