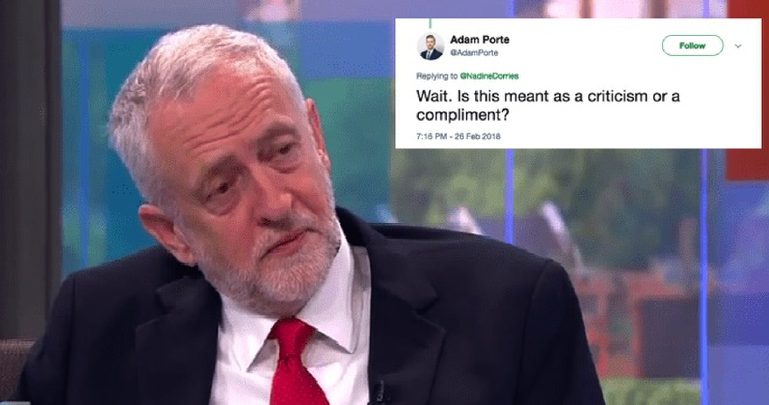 On 26 February, Corbyn announced that Labour would back Britain being in a permanent customs union with the EU after Brexit.

Tories gifted Corbyn an open goal on the customs union, and he just put the ball in.

Cue a collective meltdown in the Conservative Party, whose MPs knew they needed to smear Corbyn to win back their corporate friends, but no longer knew how to go about it.

Some clearly panicked. After the right’s sustained attempt to paint Corbyn as a communist spy backfired, Nadine Dorries MP changed tack and tried to smear him as a multi-election-winning centrist:

But coming as it did from the right, which frequently praises Tony Blair, it just left people confused:

Wait. Is this meant as a criticism or a compliment?

Jacob Rees-Mogg, a man who has dedicated his political life to fighting for the rights of the few at the expense of the many, suddenly got in touch with his socialist side in order to try and bash the Labour leader. It didn’t go too well for him:

Yes and we all know how much you care about the poorest in society 🙄 pic.twitter.com/sNSKpcaQ1I

Not to be outdone on the hypocrisy stakes, Boris Johnson told BBC Radio 4‘s Today programme that Corbyn had executed “a completely cynical, shameless U-turn”:

Boris Johnson, who wrote a newspaper article in favour of remaining in the EU immediately before he said he was in favour of leaving, says Jeremy Corbyn has done a cynical shameless u-turn. https://t.co/8cO60V08ji

International trade secretary Liam Fox, meanwhile, was having a moment of his own. Rather than bashing Corbyn directly, he decided to lash out at the people supporting Corbyn – the very people he needs to win back:

Liam Fox is apparently furious that businesses – which, unlike him, are on the frontline of Brexit – back Labour’s position of staying in Customs Union with the EU.

Does he not stop and wonder why that might be? No – he hits out at the businesses for not buying into his fantasy. https://t.co/Ur8zUwBzw3

While Conservative MPs were losing it, one former member of their ranks was busy exposing their smears. Writing in the Evening Standard, remainer George Osborne said of his former colleagues:

They say Labour is betraying its core supporters, as if the voters of Port Talbot voted Brexit because they want a more ambitious free-trade deal with China.

They say the poorest will lose out, when the economic analysis commissioned by Brexit ministers revealed the poorest parts of the country will be hit hardest if we leave a customs union.

They say Mr Corbyn is abandoning his manifesto commitment, when the Tories have abandoned their entire manifesto (how’s the work on that social care policy coming along?).

They say ‘tariff-free trade’ with Europe is a U-turn, when that was exactly what Theresa May used to promise.