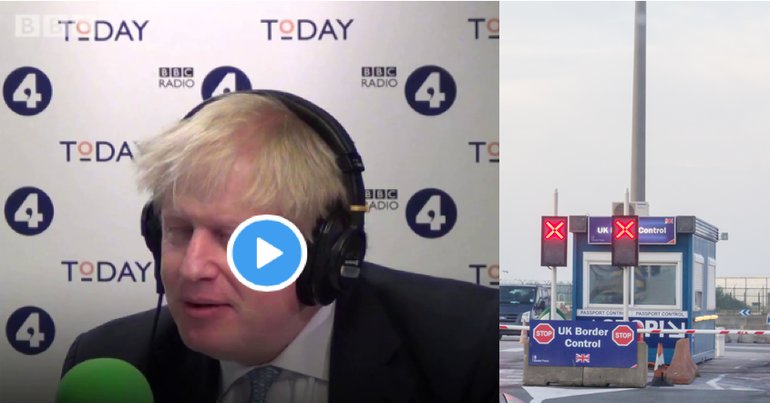 In an interview with BBC Radio 4‘s Today programme, Boris Johnson got into a pickle. He revealed he doesn’t know how UK borders work. That’s quite a problem, considering he is foreign secretary of the United Kingdom.

The EU says Northern Ireland should remain in the Customs Union (whatever the rest of the UK does) in order to resolve these issues. But the UK government is currently on course for a Hard Brexit, leaving the Customs Union altogether. Asked how he would resolve the issues in an interview with the Today programme this morning, Boris Johnson had no answers. Instead, he dismissed the complications, claiming:

There’s no border between Camden and Westminster. But when I was mayor of London, we anaesthetically and invisibly took hundreds of millions of pounds from the accounts of people travelling between those two boroughs without any need for border checks whatever.

"There's no border between Camden and Westminster."

Johnson overlooks the considerable differences between moving people and goods between two boroughs of London, and two countries – one of which is a member of the EU and one of which is not. His comments triggered backlash from both sides of the Irish border. The leader of Northern Ireland’s Social Democratic and Labour Party (SDLP) Colum Eastwood invited the foreign secretary to visit the border and learn a lesson. Eastwood told the Belfast Telegraph:

In an effort to educate Mr Johnson, the SDLP has issued a memo to the Foreign Office detailing the difficulties with a hard border and the realities faced by people, businesses and communities here.

It’s easy to characterise Boris Johnson as the cabinet clown but he carries an immense responsibility and has significant influence in the Brexit negotiations. Trivialising the very serious concerns relating to Ireland displays a dangerous ignorance that must be challenged.

You would think a basic grasp of how UK borders work would be an essential qualification for a foreign secretary. Not in this Tory government, apparently.