Confidential emails reveal police taking orders from a corporation, then lying to the media about it - Canary 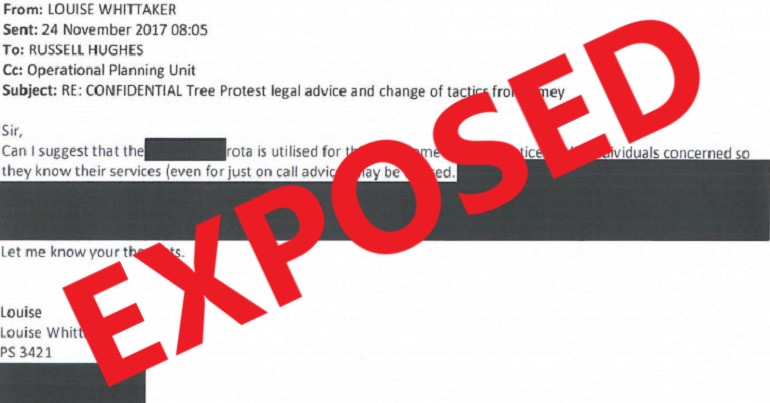 A Freedom of Information request (FOI) has revealed a worrying relationship between South Yorkshire Police and the private company at the heart of the ongoing Sheffield trees saga. Speaking to The Canary, a local politician says it shows the police “taking orders” from the company.

But one campaigner also claimed it shows the police ‘lied’ to the media and public over their involvement in the controversial dispute.

Sheffield City Council and its contractor Amey are chopping down public trees in the city. Local residents aren’t happy because of the environmental impact, the “Thatcherite” behaviour of the Labour council, and public health concerns. As The Canary has been documenting, people have been campaigning against the felling of trees.

There have been ongoing protests from campaigners, opposition councillors, and residents over the programme. These demonstrations have been highly charged: one saw two pensioners arrested, and another saw local residents reportedly face off against over 30 police officers, private security and heavy plant machinery.

But now, a cache of redacted emails has shone a light into the relationship between South Yorkshire police and Amey. At times, there have reportedly been more than 30 police officers present to control peaceful protesters. These emails, released on 10 April via an FOI by campaigner Matthew Wire, could explain why.

South Yorkshire Police: the FBI ‘have nothing on them’

They show the communications between various members of South Yorkshire Police and unnamed representatives of Amey. The police have heavily redacted much of the information – even entire emails. As campaigner Marcus Combie pointed out:

So, what do the emails tell us?

You can read the full cache here. But the relevant ones the police did not completely redact are in chronological order below.

This first email shows someone from Amey communicating with chief inspector Russell Hughes from South Yorkshire Police. It appears to indicate that the police wanted Amey’s operational plans for the week commencing Monday 27 November 2017:

It’s unclear what legal policy Hughes refers to in this second email: 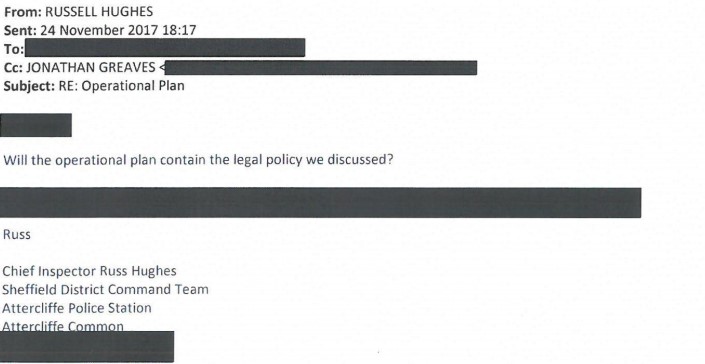 The third email below is perhaps one of the most crucial ones. It appears to indicate that the police were making operational plans for the week of 27 November. But it also shows them taking the lead from Amey on effectively what they should be policing:

The fourth email below confirms that Amey sent its operational plan to the police on Saturday 25 November 2017:

The fifth email is also telling, as police did not redact the subject line. It shows a clear working relationship between the police and Amey. Because if Amey made the police aware of a “change of tactics”, the police must also have been aware of the previous tactics. It also suggests the police were expecting, and planning for, protests: 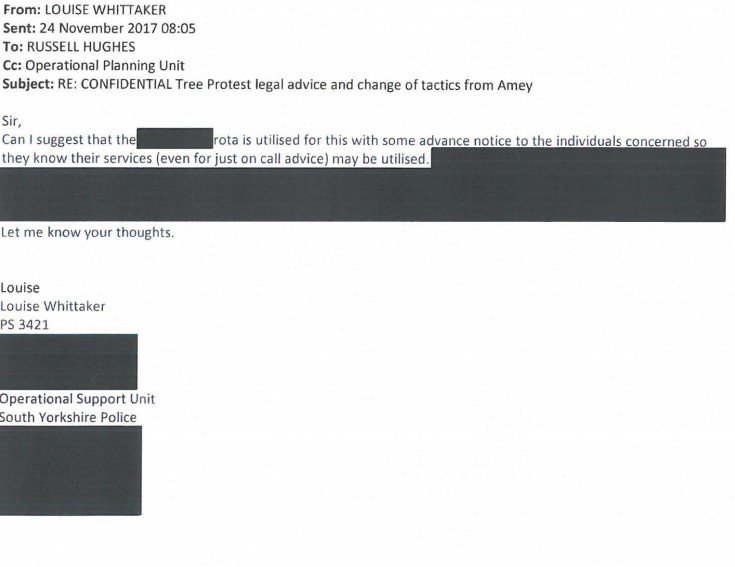 But it’s the timing of the emails that’s also crucial.

The week commencing Monday 27 November saw campaigners allege violence and abuse from Amey’s staff and its contracted security team. But, as an article in the The Star shows, South Yorkshire Police was telling the media and public that its presence at the protests was essentially ‘off-the-cuff’. As The Star reported on Tuesday 28 November 2017:

So, was there a planned operation as per the emails? Or were the police present only when ‘third parties’ ‘reported’ incidents?

Local Green Party councillor Alison Teal spoke to The Canary about the released emails. She said:

We can see from FOI requests a heavily redacted email sent to chief inspector Russ Hughes from an Amey employee, which explains the preparation of an ‘operational plan,’ being devised by Amey, to be implemented by South Yorkshire Police.

Now we know, Sheffield City Council are not alone in betraying the rights of the citizens of Sheffield. South Yorkshire Police are actively working against community interests too; and taking orders from a private company. Dystopian fiction is starting to look like a prophecy.

But South Yorkshire Police remained impassive, admitting the communication but claiming it was to create “a safe environment”. It also admitted it needed to liaise with Amey to “plan and resource the policing operation”. This is despite implying to The Star it had not pre-arranged its presence at protests.

It is a matter for Sheffield City Council and their contractors to plan where, when and how their lawful tree work will take place. In order to meet our objective of creating a safe environment for all at the site, which includes workers, protesters and members of the public, South Yorkshire Police has to be advised of the plans relating to this activity. This needs to be in advance, to effectively plan and resource the policing operation to keep everyone safe, in line with our statutory duty.

A councillor hits back…

But Teal hit back at the police’s statement. She told The Canary:

Campaigners were safe until Amey decided to employ nightclub bouncers (aka ‘security staff’) who have assaulted numerous local residents. The police are not keeping us safe, they are turning a blind eye while the heavies deliver kicks, punches and bruising wrist grabs to law abiding caring people. I am sickened by what I’ve witnessed the police wilfully ignore. We are pursuing many complaints through the police against the violence committed by Acorn [a subcontractor for Amey] workers and security workers, yet mysteriously the police are not progressing any of their investigations.

The council and the police are using state sanctioned violence against the residents of the city to help a private company boost their profits. I thought they were supposed to protect us.

The city’s Labour-led council is undertaking a 25-year, £2bn highway maintenance programme which includes the care and felling of trees. But there have been numerous twists and turns to the story.

Recently, the council has been forced to publish documents which campaigners claim are a “smoking gun”. They say the documents show the council had a target of felling 17,500 trees all along – something the council denies. On 30 March Sheffield’s trade unions withdrew their support for the council’s tree felling programme.

Also, the council took three campaigners to court to prevent them taking “unlawful direct action or from encouraging others to take direct action” against the tree felling. After a judge ruled in favour of the council, it is now reportedly seeking costs from two of the campaigners – Alastair Wright and Calvin Payne – of £11,000 and £16,000 respectively. Supporters of the pair have set up a crowdfunding campaign to cover these costs.

Now, the police appear to have been colluding with Amey. But they’ve told a different story to the media and public.

Sadly, as we’ve also witnessed with fracking demonstrations, police appear to be putting private companies’ rights before those of the public. As campaigner Marcus Combie told The Canary:

There is an old idea in philosophy about one way you can identify immorality. This is in contrast to just having the wrong end of the stick or being ignorant. It is when the immoral actor tries to lie and hide their actions from the public.

Sheffield police, Amey, and the city’s council are trampling all over democracy and the public’s civil rights. All in the name of private profit.

– Donate to the crowdfunder and read more of The Canary‘s coverage on the Sheffield tress saga.