A court has ruled that a council's 'outrageous' policy is legal. And it's so bad even Michael Gove objects to it - Canary 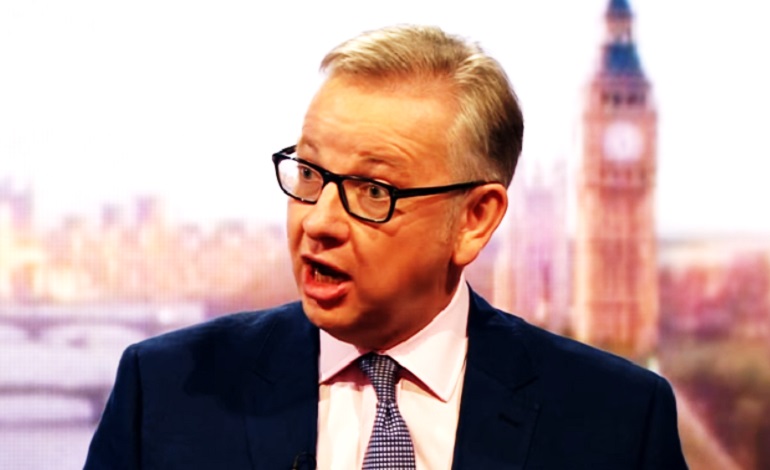 On Tuesday 15 August, the High Court ruled that members of the public were not allowed to take “direct action” against a council’s “outrageous” policy. And not only does the order fly in the face of democracy, but it even goes against the Tory Environment Secretary Michael Gove’s objections. Which is really saying something…

Our green and pleasant land?

In 2012, the council gave outsourcing company Amey the contract for street maintenance; and therefore tree felling. But STAG claims that Amey has ignored 30 years of agreements on street trees. The council based the agreements on consultations with local communities. STAG says, however, that:

Since 2014, residents have been protesting about the planned felling of trees. But after a series of high-profile demonstrations, one which saw two pensioners arrested and 12 police officers present to protect the council’s work, the Labour-led authority took protesters to court.

And on 15 August, the judge in the case ordered that Green Party councillor Alison Teal and two campaigners, Calvin Payne and David Dillner, are barred from taking “unlawful direct action or from encouraging others to take direct action” against the tree felling.

After the ruling, the council said that anyone who tried to protest “inside a safety zone” around the tree felling area would be in contempt of court and face the risk of a fine or imprisonment. But STAG hit back, and issued this statement: 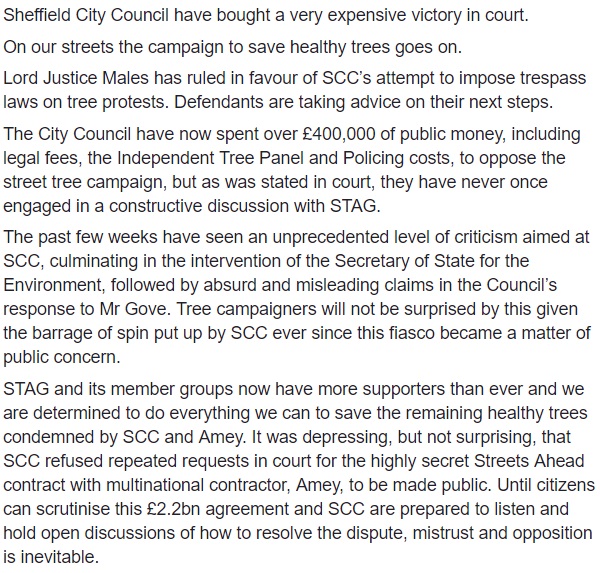 The protesters have even got support from Environment Secretary Gove. He wrote to the council in early August, saying:

The destruction of thousands of mature trees from the Steel City will surely damage our children’s rightful inheritance… It is clear that many of Sheffield’s residents are deeply frustrated and angry at the decision… I would call on the council to listen to the people of Sheffield and end [the] tree felling and replacement programme.

In a statement, Bryan Lodge (the council’s cabinet member for the environment) said:

We have a responsibility to the taxpayers of Sheffield to do everything we can to avoid catastrophic financial consequences if the… work is not completed… Court action has been a last resort… We had no choice but to pursue these injunctions to stop a small number of people from causing major delays, not only to tree works, but also to work on roads, footpaths and street lights across the city.

We know from regular feedback that the majority of people in Sheffield support the [tree felling] programme and want us to get the job done.

But Green Party councillor Teal said of the court’s decision:

It’s deeply worrying and quite extraordinary… I’m still processing it in terms of what it means for democracy: people who haven’t been involved in the campaign are going to be prevented from doing so. What does that tell people? That they’ve got no right to protest about it in future?

Gove was clearly acting in the interests of political point-scoring with his intervention. But that does not detract from the wholly undemocratic nature of Sheffield council’s actions. And as STAG said in its statement, the campaign “to save healthy trees goes on”. The implications, however, of a council going to court to stop the public protesting, could outlive the very trees in Sheffield that this whole saga centres around.