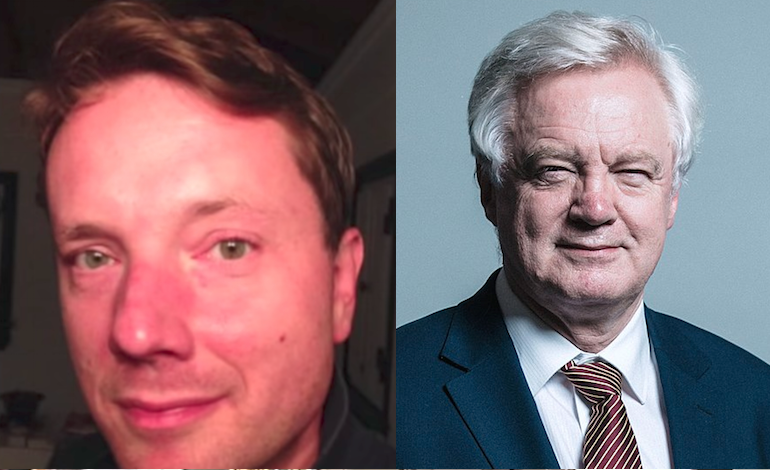 The former chief of staff to Brexit Secretary David Davis has launched an epic Twitter tirade against his former boss. On 15 August, James Chapman accused Davis of bullying Diane Abbott, having cosy relationships with top BBC presenters, and working a three-day week. He also alleged that Davis had links to the far right:

Davis admitted to having Farage’s number, although he denied he had it on speed dial. So Chapman shot back:

And he ordered appalled civil servants to programme it into his official phone. They refused #thedemocrats #wemarchon https://t.co/zxVzB5pitg

Chapman is not the first person to call out Davis’s close ties to Nigel Farage since the pair campaigned to leave the EU. Vote Leave director Dominic Cummings has said Davis:

spent the campaign boozing with Farage, predicting defeat and briefing [against] Vote Leave.

And Farage himself has said he felt “betrayed” by the Brexit Secretary’s February 2017 announcement that it could take years to restrict the freedom of movement of people after Brexit. Speaking on LBC shortly after the announcement, Farage said:

David Davis, the Brexit secretary, a man that I campaigned with, I shared platforms with during the referendum campaign, the man that I thought was the ultimate hardliner in this government, the man that would absolutely guarantee that Brexit meant Brexit, has said in a speech in Riga, Latvia that… he would only restrict free movement of people when it was in the national interest… I just wonder whether, like me, you feel a little bit betrayed by what’s been said by David Davis, of all people?

At the time of writing, Chapman had not expanded on his allegations about Davis’s “far-right friend”, and Davis had not responded to a request for comment by The Canary.

But Davis has some history when it comes to flirting with controversial groups. In 2001, he was happy to address the Swinton Circle, a right-wing Tory fringe group “set up by devotees of Enoch Powell who backed his views on immigration”, according to The Independent. Its more recent material asks:

would it not be difficult to argue against the mass movement of people from Britain to say some part of Africa?

And as Nafeez Ahmed reported for The Canary in July 2016, Davis was also on the political council of the neoconservative Henry Jackson Society (HJS), whose associate director Douglas Murray has called for a Muslim ban to the UK, saying:

It is late in the day, but Europe still has time to turn around the demographic time-bomb which will soon see a number of our largest cities fall to Muslim majorities. It has to. All immigration into Europe from Muslim countries must stop.

At the time, Davis failed to respond to multiple queries from The Canary about his affiliation with the HJS. Since then, the HJS has removed references to its political council from its website.

The rise of the far right

Chapman is an ardent Remainer. As such, he has every reason to slate his former boss, the man in charge of taking Britain out of the EU. And some of his comments have been refuted by figures at the BBC and the Department for Exiting the EU (DExEU). But at a time when fascism and the far right are being emboldened by politicians and the media, Davis needs to explain publicly any links he has to far-right individuals or groups. And he needs to do it now.

James was a ‘Remainer’ from the beginning, but he was a very good Chief of Staff. I am not going to criticise or argue with him [on air].

The Canary received no response from Davis by the time of publication.

– Read more from The Canary on fascism.