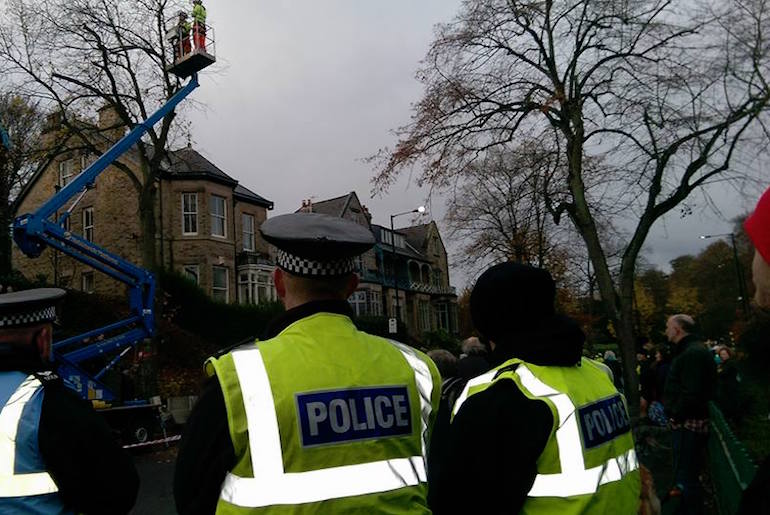 Two pensioners have been arrested for the most ridiculous of reasons. Police held two women aged 70 and 71 in custody after an early morning operation in Rustlings Road, Sheffield. The reason for the arrests? The pensioners were peacefully protesting the cutting down of trees.

The husband of 70-year-old Jenny Hockley, one of the women arrested, explains:

The police and contractors came and knocked on doors in the middle of the night at about 4.30am and asked people to move cars. Then some protesters went to intervene. There is not much we can do but she (Jenny) wanted to make a stand. She and another woman stood inside the ribbon around the tree.

Sheffield Tree Action Groups (STAG) is campaigning against the felling of trees around Sheffield. In 2012, the council gave outsourcing company Amey the contract for street maintenance. But STAG claims that Amey has ignored 30 years of agreements on street trees. The council based the agreements on consultations with local communities. The group says that:

Since 2014, residents have been protesting about the planned felling of trees. STAG claims that the Labour-led council ignored their concerns. The council then set up a ‘Tree Forum’, to consult the residents on the tree felling programme. But STAG argues the council buried the forum’s recommendations. Jennifer Saul from STAG wrote in The Huffington Post:

We learned their recommendation today, only after the felling. Although the [Tree Forum’s] recommendation was dated 22 July, it was only published this morning [Thursday 17 November] at 4.30am. The council’s hand-picked experts recommended against felling six of the eight trees. And yet the council was so determined to destroy them anyway that they engaged in a massive police action against law-abiding citizens in the middle of the night.

South Yorkshire Police confirmed that 12 officers “provided assistance at the request of the council”. A spokesperson said the police arrested three people on suspicion of preventing lawful work. The police say this was under Section 241 of the Trade Union and Relation Act 1992.

This green and pleasant land?

STAG claims that the council has felled 3,800 trees so far, with more to follow. The group wants the council to stop felling trees until a proper consultation has taken place.

In a statement, Bryan Lodge, the council’s cabinet member for the environment, said:

For more than a year we have worked tirelessly with Amey and the local community to find the right solution for Rustlings Road. We have written to every home, brought in a new survey process for the entire city and set up an independent tree panel. We have made a final decision to increase the number of trees on Rustlings Road by almost 30%. [The council] need to replace eight out of the 30 existing trees, but we will plant 17, which means the road is gaining an extra nine trees. We understand that this will be a difficult day for the tree campaigners, but this work is absolutely essential to ensure that Sheffield has healthy street trees for future generations.

But Saul says that:

At a time when fascism and hate in the rise in the world, Sheffield council has bizarrely decided that one of its highest priorities must be destruction of trees that its own advisors have recommended saving, and it has decided to do this in just about the most authoritarian way possible. This is outrageous.

And with more trees still to be felled, it would appear that what STAG refers to as “one of the greenest cities in Europe” may not be that green for much longer.