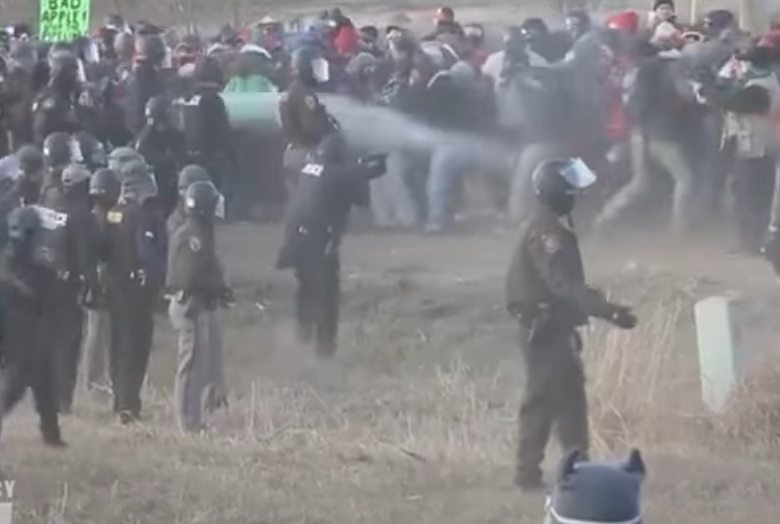 People from around the world joined a day of action on 15 November against the controversial Dakota Access pipeline in the US. And as protesters raised their voices, more reports of police abuses came to light.

Criticism of the pipeline

The $3.7bn (£2.8bn) Dakota Access pipeline (DAPL) in North Dakota has drawn several worldwide protests in recent months. At the centre are the Standing Rock Sioux Native Americans. They say the pipeline could pollute their main water supply, and that of 17 million other people. They also say it would cross over its sacred ancestral burial grounds and archaeological sites.

Anti-globalisation and environmental activists, meanwhile, argue that the pipeline will greatly increase fossil fuel emissions. Their most recent day of action coincided with November’s UN climate summit in Morocco.

While protests have generally been peaceful, police have been making mass arrests. They even issued an arrest warrant against award-winning Democracy Now! host Amy Goodman after she filmed pipeline security guards using dogs and pepper spray against protesters. Meanwhile, there have been accusations that the police have been “viciously attacking” activists and keeping protesters in kennel-like confinement.

Tara Houska, national campaigns director for environmental group Honor the Earth, has now described her own treatment at the hands of police. Speaking on 16 November, she said:

I was arrested for criminal trespass as I was… leaving a peaceful demonstration and getting into my car on a public road. They arrested us and zip-tied us on the side of the road for two hours. We were then thrown into jail… and put in… a large chainmail dog kennel, for over six hours, while they didn’t even actually charge us with crimes. After that, I was strip-searched and then thrown into jail and, finally, late, late that evening, was charged with a crime…

this is happening right now. Native people are being hurt right now. There were people being maced and tased again yesterday [15 November].

But on 14 November, there seemed to be some hope for campaigners. The US Army Corps of Engineers, which is responsible for the planning permission for the pipeline, announced it was holding back the final permit to drill. It said there would need to be further discussion and analysis. But Energy Transport Partners, which is building the pipeline, is taking the issue to court. It insists that it already has the right to build the pipeline without any further actions or permits from the Army Corps.

And US President-elect Donald Trump is on the company’s side. He is an investor in Energy Transport Partners. Its Chief Executive, meanwhile, donated more than $100,000 to Trump’s election campaign. Trump also backs measures to increase energy industry development and upgrade US oil and gas infrastructure. It is perhaps unsurprising, then, that Energy Transfer Partners head Kelcy Warren has said he’s 100% confident that Trump will support the pipeline’s completion.

But former presidential hopeful Bernie Sanders, who opposes the pipeline, spoke up for protesters outside the White House on 15 November. He urged President Obama to stop the pipeline before Trump takes over, and stressed the urgency of the issue:

I don’t have to tell anybody here that we have a new president coming in… who wants this country to become more dependent on fossil fuel… What we have got to tell Mr Trump and everybody else: We are not going silently into the night. The stakes are too high for the future of this planet… We’re going to bring tens of millions of people, moms and dads and their kids, together… to tell the fossil fuel industry that their short-term profits are not more important than the future of our planet.

In other words, this isn’t over yet.

– Find out how to support the protest.

– Read more from The Canary on the pipeline.