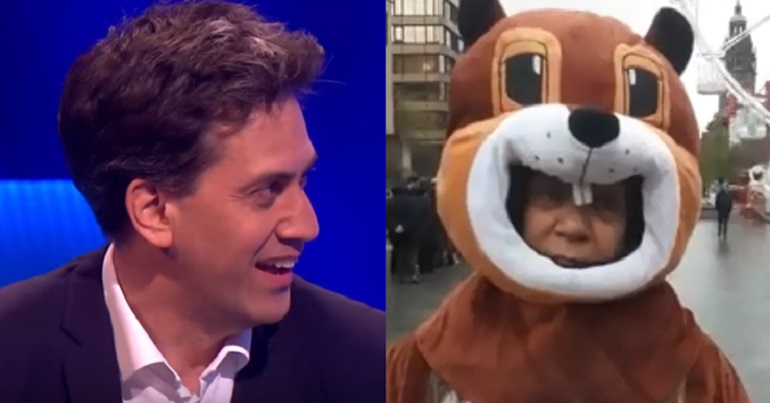 Former Labour leader and MP Ed Miliband narrowly avoided a spot of bother with a squirrel in Sheffield on Friday 27 April.

But amid the quietening of the chainsaws, a squirrel and some campaigners made their presence felt on 27 April, right outside where Miliband was recording his ‘reasons to be cheerful’ podcast. They said they had some “reasons to be grumpy”: 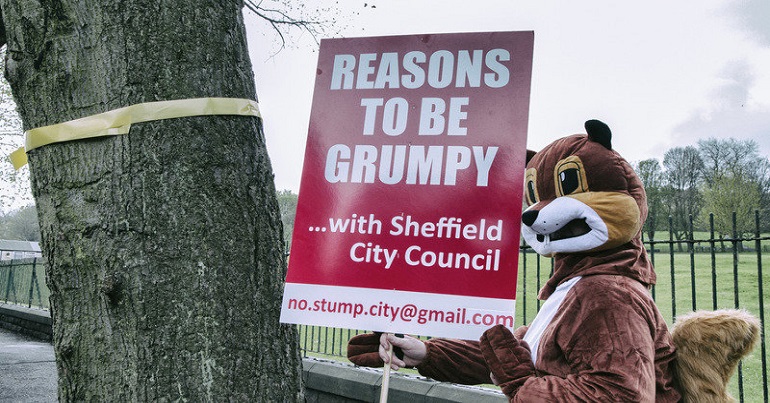 One squirrel, who did not wish to be named, told how police arrested it for ‘tooting’ a toy horn during a protest over the tree felling:

The squirrel was also handing out leaflets and talking to people who were queuing to see Miliband.

The campaign group No Stump City was raising awareness of a petition it has just launched. It calls on Sheffield District Labour Party to allow its members a vote on the council’s tree felling programme. The petition is specifically aimed at the three constituencies where most of the tree felling is taking place: Sheffield central, Hallam and Heeley.

The Sheffield trees crisis has produced a clear and significant disconnect between Sheffield Labour Party members and the… council. With 5,500+ street trees felled to date and another 12,000 facing the chainsaw, it is not only squirrels that become grumpy.

It wants Labour members to have a secret ballot on two questions:

No Stump City also highlights the private finance initiative (PFI) deal at the heart of the tree felling saga. It says:

The tree crisis is rooted in a controversial 2012 PFI… signed between the council and Amey… PFIs are notoriously poor value for taxpayers.

Alan Story from No Stump City told The Canary:

Sheffield is still an overwhelmingly Labour-controlled city and so, at least in the short run, we think the emphasis needs to be on independent political action and ramping up pressure on the local Labour Party. There is a lot more to politics than voting.

Sheffield: the eye of a political storm

As The Canary has been documenting, Sheffield has become the eye of a political storm. The council is undertaking a 25-year, £2bn highway maintenance programme which includes the care and felling of trees. There have been ongoing protests from campaigners, opposition councillors, and residents over the programme.

These demonstrations have been highly charged: one saw two pensioners arrested, and another saw local residents reportedly face off against over 30 police officers, private security, and heavy plant machinery.

During this saga, the council took three campaigners to court to prevent them taking “unlawful direct action or from encouraging others to take direct action”. After a judge ruled in favour of the council, it is now reportedly seeking costs from two of the campaigners of £27,000.

Meanwhile, emails revealed South Yorkshire Police “taking orders” directly from Amey over its operations. Just this week, The Canary exposed how the council was running a surveillance operation against campaigners and residents; one which campaigners believe could be illegal.

If the anger from campaigners and residents is replicated in the local elections, Labour could be in for a surprise. But in the eventuality that the party is still in charge on Friday 4 May, No Stump City believes that change may have to come from within the party. A petition seems like the first step to doing this.

– Read more of The Canary‘s coverage on the Sheffield trees saga. Sign No Stump City’s petition.