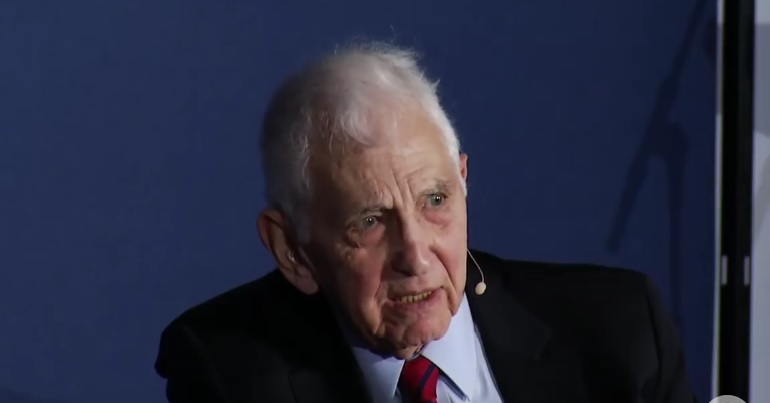 Renowned Pentagon Papers whistleblower Daniel Ellsberg recently spoke about a US war plan he was party to when he worked at the Pentagon. He exposed that the US knew its plan would kill 600 million people for starters – including 100 million of its European allies.

The ex-nuclear war planner’s testimony is sobering. Because it shows the lengths our leaders will go to in order to ‘get’ their enemies. And his testimony is particularly relevant now, given that the US and others are currently banging the war drums over Syria and Russia.

Ellsberg and acclaimed academic and political analyst Noam Chomsky discussed the topic of nuclear war at the University of Arizona on 24 April. The editor-in-chief of The Intercept, Betsy Reed, moderated the discussion.

Ellsberg has recently published a book on nuclear war called The Doomsday Machine: Confessions of a Nuclear War Planner. And in the book, he reveals the US’s war plan for a nuclear conflict with Russia in the 1960s.

In his Pentagon role, Ellsberg reportedly submitted an important question to the relevant authority about the plan at the time. It apparently involved ‘wiping out’ the vast majority of cities in China and the Soviet Union. So he asked:

If your plans… are carried out as planned… how many people will die in the USSR and China?

The answer came quite quickly, according to Ellsberg:

They did have an answer, and they gave it without apology… The answer was in the form of a chart… rising over six months because radioactive fallout would increase the deaths…

The answer was 325 million people if we struck first…

Another 100 million would be killed in the captive nations [Soviet-linked nations in Eastern Europe]… from their [US] air defences attacks on those air bases… And then another 100 million in contiguous areas… like Afghanistan, Austria, Finland, Japan… from radioactive fallout.

The whistleblower also heard what the expected death toll would be for US allies in Europe:

And without another warhead landing on West Europe, naturally, from our attack, 100 million of our allies would be killed by radioactive fallout from East Europe and the Soviet Union, depending on which way the wind blew…

Meanwhile, Ellsberg said the USSR at the time had the ability to “annihilate” Western Europe, which it would likely do in the event of a US attack.

And although Ellsberg asked the question in the 1960s, he said:

People have now told me, who are insiders on the plan, quite authoritatively, the plans have never reflected this, never taken [smoke] into account any more than they take fire into account, which means that our own attack… would kill nearly everyone…

And the plans are still there.

The US and the USSR both tested thermonuclear weapons for the first time in 1953. As Chomsky explained in the discussion, Ellsberg reveals in his book that scientists held an alarming view about the weapons’ capacity. Chomsky said:

There was an expectation on the part of US scientists, and probably Russian scientists, that the thermonuclear weapons might set the whole atmosphere on fire and destroy everything. They thought it a pretty low probability but not zero…

Yet the tests went ahead.

So the nuclear tests alone were a massive risk. And the war plan was tantamount to signing a death warrant for the entire human species. Especially when it’s pointed out there are “lots of fingers on the [nuclear] button” in the US. Because presidents historically sub-delegate authority for launching a nuclear war. So if an enemy manages to immobilise one entity – such as the president – retaliation is still possible.

But, as Chomsky explained, this meant that “even bomber pilots” had the possibility of starting a nuclear war during the Cuban missile crisis. And Ellsberg says that other “major” nuclear powers probably have the same system.

No wonder, then, that Ellsberg has considered whether there’s something wrong with the human race. In the discussion, Chomsky says:

At one point in the book, Dan [Ellsberg] mentions that this seems to be a species pathology. Something about the species… there’s a lot of information looking back into the history of the human species which suggests that, somehow, there’s a lethal streak in the species; an extraordinary savagery…

As Ellsberg’s book shows, this lethal streak is evident in how the US, and other countries, have behaved thus far. And it doesn’t look set to dwindle any time soon. In fact, Donald Trump has just lowered the threshold for nuclear weapon use. So now, Trump could feasibly launch a nuclear strike in retaliation to a cyber attack.

There truly is something amiss with the human race. And at the rate we’re going, we may not survive long enough to rectify it.

You can watch the full discussion here:

– Take action with the Stop the War Coalition. Support Campaign Against Arms Trade. And get involved with the Campaign for Nuclear Disarmament.