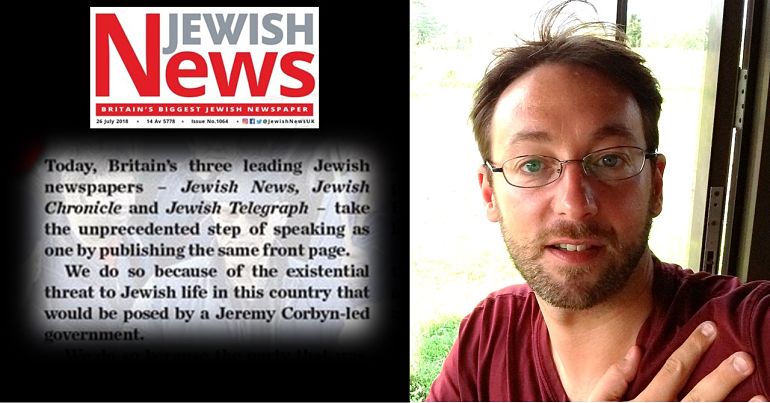 Today, The Canary publishes our exclusive Q&A with Stephen Oryszczuk, foreign editor of Jewish News. His publication was one of three Jewish weekly newspapers that jointly accused Labour leader Jeremy Corbyn of being an “existential threat” to British Jews.

As a senior journalist at the paper, and a person committed to fighting antisemitism, he says of the action:

Below are the three major points Oryszczuk made during his interview with The Canary.

1) Jeremy Corbyn is not an antisemite, and the Labour Party does not represent an “existential threat” to Jewish people

On 25 July, Jewish News, the Jewish Chronicle and the Jewish Telegraph published a joint front-page editorial:

But despite this inflammatory rhetoric, Oryszczuk says:

I don’t believe he’s antisemitic, nor do most reasonable people. He’s anti-Israel and that’s not the same.

Oryszczuk goes on to explain that antisemitism is real, dangerous, and the left is not immune from it. But he also says that anti-Corbyn figures in media and politics have hijacked the issue. This has created a toxic atmosphere which makes dealing with antisemitism harder, not easier. He says “most Jews just want Corbyn to get on top of Jew hatred”, but those who have weaponised the issue:

are certainly out to get him… all I can say is that it’s sometimes questionable where these things come from.

Despite the near-hysterical reporting, sensible people know this is true. Kenneth S. Stern, the man effectively responsible for creating the definition in the first place, explained these issues to the US House of Representatives after learning that the definition had been used on various US university campuses to “restrict academic freedom and punish political speech”. Recently, 36 Jewish organisations from 15 countries issued a joint statement repeating Stern’s concerns. Oryszczuk agrees with them, saying:

The main definition is vague, the examples lack context and qualification, and those campaigning so hard for its verbatim adoption, with their strident opposition to context, at the very least need to explain why they’re so against giving it depth, given how many leading barristers have raised concerns about it. Many Jews share those worries but their voices are not being heard. Increasingly, if anyone does voice concern about the definition, they are seen as antisemitic for doing so! I would be truly fearful for our country and the right to free speech if that were the case.

Asked for examples, he says he is personally aware of one peer “writing letters to university vice-chancellors on behalf of a pro-Israel organisation in the UK, advising them to cancel Israel Apartheid Week activities or risk falling foul of the IHRA definition”. He continues:

At least one university did so. It saddens me that the IHRA definition and its examples are already being used to silence potentially legitimate criticisms of Israeli policy that have, for many years, been considered a student’s right to voice. Has the IHRA now silenced that? If so, what will it silence next? That’s my worry. If you push the IHRA verbatim, it seems that this is what you get. We all need to protect against that.

Asked why the array of dissenting Jewish voices seems to be less widely reported, Oryszczuk says:

It’s partly our fault, in the mainstream Jewish media. We could – and arguably should – have done a better job at giving a voice to Jews who think differently, for which I personally feel a little ashamed.

There’s a Jewish saying: ‘two Jews, three opinions’ – a conservative estimate in my opinion! It expresses the wealth of views held on any given subject, voiced on any given Friday night. It’s a tradition I love from a people I love, and I think they’d say that habit has served them well over many hundreds of years. But on Israel today, what you hear publicly tends to be very uniform.

Oryszczuk is not a leftie. He’s not a right-winger either. In fact, as he states in the interview, his commitment to truth in journalism stems from his family history. His grandfather faced threats on his life from both the extreme left (Soviet) and extreme right (Nazi). As a result, Stephen promised his grandfather he would stay out of politics, and stand for the truth, always. By speaking out now, Stephen is attempting to keep that promise.

We encourage you to read the Q&A in full here.