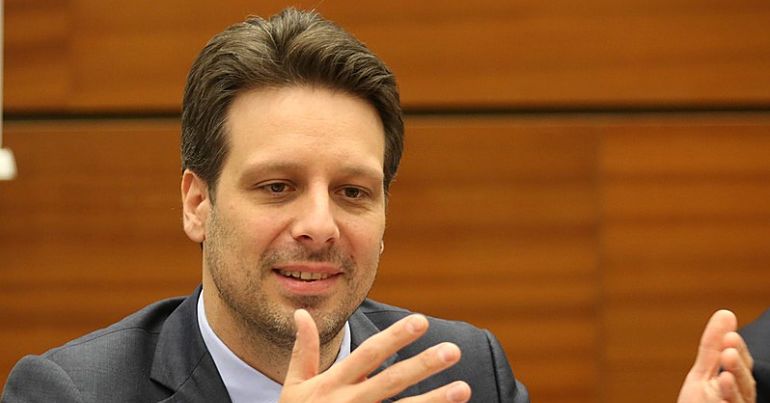 This is part 2 of a 3-part interview with Guillaume Long, the former foreign minister of Ecuador. Part 1 covers lawfare in Latin America, and part 3 covers Ecuador’s decision to grant political asylum to Julian Assange. The interview has been edited in part for clarity.

After the Panama Papers were published in 2016, then-Ecuadorian foreign minister Guillaume Long led attempts to create a global regulator to abolish tax havens. On 14 September, he spoke exclusively with The Canary about global systemic corruption, and how the left should deal with it.

In the Western corporate media, corruption tends to be something that happens over there. As DW emphasised in 2006, “Corruption [is] a cause of poverty in the developing world”. In 2019, the Washington Post ran with the headline: Latin America is fed up with corruption. Leaders need to face the reckoning. These stories tend to focus on individual cases of corruption in the global south, while avoiding uncomfortable subjects like the legacy of colonialism, unfair trade agreements, or wider critiques of capitalism. Reading between the lines, we might infer: Poor countries are poor because they can’t elect trustworthy officials.

As various left-wing Latin American political leaders became targeted by politically-motivated corruption investigations (lawfare) over the past decade, the corporate media responded with predictable and uncritical enthusiasm. Though the grounds for charges were often weak, the corruption scandals fit the narrative – and few Western journalists thought to seriously to question it.

Yet regardless of the legitimacy of the corruption allegations, corruption in the forms of official bribery and theft typically costs developing countries a mere fraction of systemic corruption in the form of global tax havens. And at the same time, politically-charged corruption investigations have served to empower Latin American governments pursuing neoliberal economic restructuring – a form of upward wealth transfer that many consider systemic corruption. Our common perception of corruption, in other words, can serve to conceal a more sinister and harmful kind of economic fraud.

As Ecuador’s foreign minister, Long spearheaded plans to create a UN body dedicated to stamping out tax havens and, in the left-wing government of Rafael Correa, railed against neoliberalism. He spoke at length with The Canary about issues surrounding corruption.

Do you think the left needs to switch the focus from individual (and comparably insignificant) acts of corruption to systemic corruption?

There are a number of issues on corruption. There are ethical issues – and of course the left has to come down strong on corruption for ethical reasons because it’s not acceptable for a public functionary, for civil servants, to get a backhander in exchange for contracts, which is the most common form of corruption, certainly in Latin America…

The left has based its platform – its political identity and discourse – on ethical issues, on ideas of equality, democracy, social justice, on what a society should be like, on protecting the most vulnerable. So when corruption hits the left it’s always more damaging than it is for the right. That’s more of a political thought; I think it’s important for ethical but also for political reasons for the left to be extremely hard on corruption.

If you look at tax evasion in Ecuador, there are estimates that have been calculated over the years… [which show that] the fruits of tax evasion are probably equivalent to a third of Ecuadorian GDP. And if you’re an economist, the debates are whether the country grew 3, 4, 5, or, wow, 6 percent is Chinese growth rates. But we’re now talking about 35 percent of Ecuadorian GDP hiding away in tax havens. So we’re focusing on the anecdote, and we’re not focusing on the main point – which is what a lot of, unfortunately, political debate is about in today’s world.

The debate is often not about private corruption – it’s about public corruption. There’s an emphasis on public corruption, and it’s important that there should be some focus on public corruption because at the end of the day we need honest civil servants and they’re dealing with the money that comes out of everyone’s pockets. But private corruption is also would-be money that civil servants would be administrating, and it has a much greater impact on development and growth, the redistribution of public policies, the presence or absence of infrastructure, of schools, of hospitals, of healthcare, than a few pay-offs have.

So I think we really need to re-focus this debate. Backhanders for contracts and campaign financing are the two biggies in the debate, and they’re important. But we need to think about corruption in the broader sense. And we need to think about systemic corruption, and how even certain actors who supposedly stand against corruption… often encourage it by defending the current international financial architecture, and by not cracking down on governments [enabling tax havens] or even seeking revenge on governments that seek to change the status quo.

In May 2019, for instance, research published by the Tax Justice Network showed that the UK and its overseas territories lead the world in providing havens for corporate tax avoidance.

Would you say that the response to the Panama Papers was inadequate?

We’ve made progress and that’s important, but obviously there’s a load more progress to be done. And the countries who worked on trying to fight tax havens and nefarious tax practices and tax evasion such as Ecuador are also the ones who are being most attacked by the powers of global international economic governance. Today the IMF is back in Ecuador, the US state department, the US treasury and so on and so forth.

What I’m saying here is that a lot was done after the Panama Papers – though a lot more should be done, and there’s a lot of double standards, a lot of hypocrisy.

Climate breakdown can also be perceived as a form, and consequence, of global systemic corruption. What role might countries like Ecuador play in addressing climate breakdown?

I think a return to power really has to have a strong social and environmental agenda – and these agendas are not incompatible. I think the idea of building a stronger state and moving away from neoliberalism is also, by nature, pro-nature and pro-environment, because I think neoliberalism is a very harmful system to the environment. I think neoliberalism implies deregulation, and deregulation is disastrous for the environment. And I think we need to push that narrative, and when we are in power we need to make sure that narrative has real tangible results on the ground and that we don’t open up for mining anywhere in sensitive environmental areas, that we are respectful of cultures, that we are respectful of biogenetic heritage.

As global economic injustice becomes intensified by climate breakdown, the left must develop a clear analysis of corruption – and how to beat it.