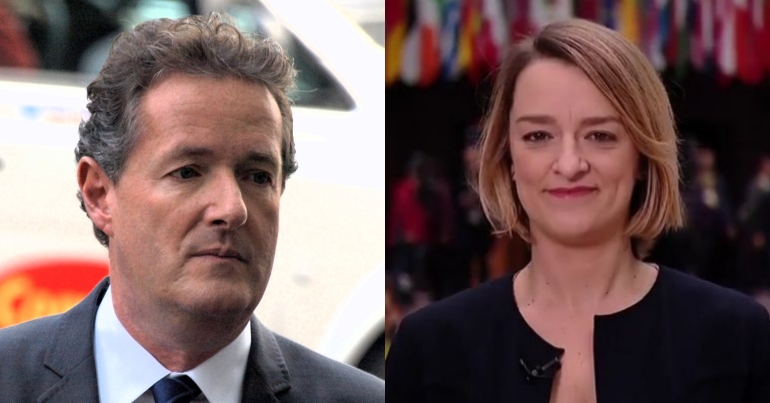 On 18 September, #SackLauraKuenssberg started trending on Twitter. Social media users expressed outrage after she tweeted that the man who confronted Boris Johnson at a children’s ward was a Labour activist and then identified who he was. People claimed that by identifying the man, Kuessenberg was ‘inciting’ a Twitter pile on.

But Piers Morgan came to Kuenssberg’s defence by claiming her critics are “ignorant bug-eyed bullies”:

This ludicrous #sacklaurakuenssberg campaign just about sums up the pathetic, fact-devoid, hysterical tribalism that now infests political debate.
You can’t get more impartial, or superbly professional, than @bbclaurak – so leave her alone, you ignorant bug-eyed bullies.

Some people argued that Morgan himself is a bully:

Says the man who uses his platform daily to humiliate complete strangers.

And as others pointed out, having Morgan come to your defence isn’t exactly a glowing endorsement:

Just when she thought it couldn’t get any worse, here’s a Piers Morgan endorsement.

When Piers Morgan comes out on your side, you know you're in trouble.

You know you’re in trouble when…

But it wasn’t just Morgan who leapt to Kuenssberg’s defence. And some of the other people rushing to defend the BBC‘s chief political editor didn’t do her any favours.

People are using this pathetic hashtag #sacklaurakuenssberg to call for the BBC to sack @bbclaurak because she tweeted an *accurate fact* about a man who spoke to the PM. Laura was – and I know this is going to be too complicated for some people to grasp – simply DOING HER JOB.

Sad that this statement even needs to be issued. The hateful social media mobs going after @bbclaurak for doing her job are a deeply depressing development in the political discourse of today. https://t.co/5wYELhS3mL

And if that wasn’t enough, the right-wing Spectator stepped in to defend Kuenssberg:

Laura Kuenssberg did her job. Leave her alone, says @jameskirkuphttps://t.co/zAVrxLODpt

The BBC is supposed to be an impartial broadcaster. Time and again, Kuenssberg and her colleagues have shown this often doesn’t happen. But it’s because of this supposed neutrality that people feel the need to call her out – especially when they believe her tweet could open up someone to abuse.

The people rushing in to defend Kuenssberg speaks volumes. And when your loudest defenders are people like Morgan, it has to be obvious you’re going to be on the wrong side of history.