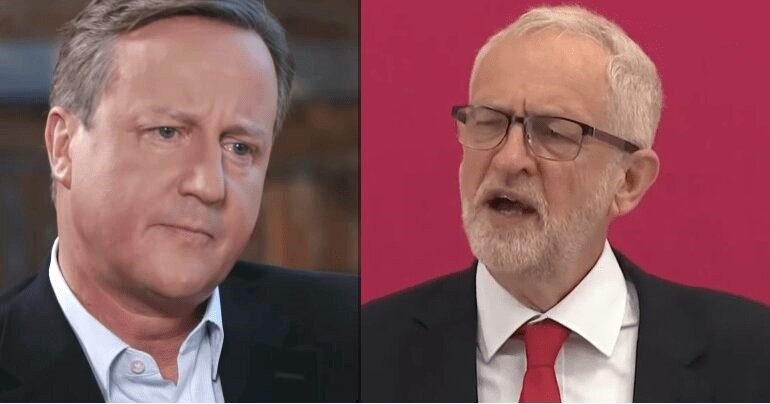 Jeremy Corbyn took David Cameron down on 19 September after the former prime minister effectively said he’s “very proud” of austerity. After disappearing following the Brexit referendum result, Cameron is back in the limelight trying to promote his new book.

I was someone who led a government where I was very proud to say ‘these are Michael Gove’s school reforms, these are Iain Duncan Smith’s welfare reforms, this is George Osborne’s economic strategy’. I liked… building that team.

David Cameron just said he was "very proud" of how Iain Duncan Smith cut social security for those who need our help the most.

Millions are living in poverty, foodbank use has soared and some have died after being deemed "fit for work".

The Tories don't and never did care.

Under Cameron’s administration, Duncan Smith presided over the Bedroom Tax, tax credit cuts, and skyrocketing foodbank use. The former work and pensions secretary cut support for disabled people dramatically, such as by removing £30 a week from disabled people’s Employment and Support Allowance (ESA). The UN has repeatedly slammed the Conservatives for violating the rights of disabled people, calling the situation a “human catastrophe”.

What’s more, austerity is a failed ideology that only weakens economies. Even the conservative International Monetary Fund (IMF) has conceded that the neoliberal project isn’t economically viable.

That makes sense when you consider how the country’s rich are currently doing. Because the Conservatives claimed that we had to cut public spending to tighten our belts after the financial crash. Yet since 2009, the UK’s richest families have massively increased their wealth. These ultra-wealthy people went from owning around £258bn in the wake of the financial crisis to around £724bn in 2018.

Boris Johnson’s chancellor Sajid Javid has now promised to end austerity. But the plans do not undo the cuts that successive Conservative-led governments have made since 2010. That includes real-term cuts of almost 50% to local authorities since Cameron took power. It also includes the closure of almost 500 libraries, and the scrapping of the educational maintenance allowance.

Corbyn is totally right to launch a withering takedown of Cameron and his party. The ex-PM may be proud of his class war against the majority, but people are fighting back in ever-greater numbers.