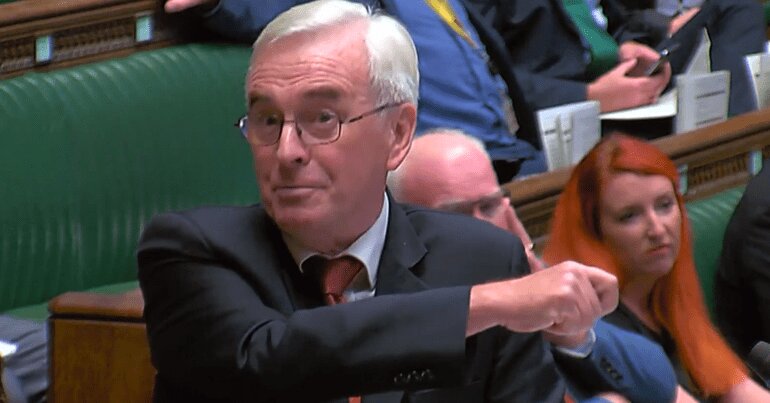 Shadow chancellor John McDonnell embarrassed Sajid Javid with a mischievous one-liner in the Commons on 4 September.

McDonnell was responding to chancellor Javid‘s budget announcements. Noting that both himself and Javid are the sons of bus drivers, the shadow chancellor quipped:

you wait ages for one son of a bus driver to become chancellor of the exchequer, only to be followed soon after by another.

Taking down the Conservatives

In his announcement, Javid claimed the Conservatives would deliver spending increases in departments such as health, policing, and education. But Paul Johnson, director of the Institute for Fiscal Studies (IFS), commented that “most areas of public service spending were still much below 2010 levels”.

On top of that, the plans do not undo the cuts successive Conservative governments have made since 2010. That includes real-term cuts of almost 50% to local authorities since David Cameron took power. It includes the closure of almost 500 libraries, and the scrapping of the educational maintenance allowance.

With that in mind, McDonnell said:

The people will see today’s statement as the grubby electioneering that it is.

This is not a spending review as we know it… the Tories have checked what are the top three or four issues in the polls, and they’ve cynically judged how little money they have to throw around to try and neutralise those issues and the concerns of people. So to come here and to try and fool us with references to peoples’ priorities is beyond irony.

When did this extremist, right-wing Tory group ever put the people first? Ever? Were they putting the people first when they froze child benefit year after year, or introduced universal credit – a brutal regime? The result this summer according to The Childhood Trust was children scavenging for food in bins because they didn’t have free school meals in the summer holidays.

McDonnell didn’t hold back in the Commons on 4 September. He exposed the Conservatives’ horrific record on the economy and skewered Javid with dry humour at the same time.