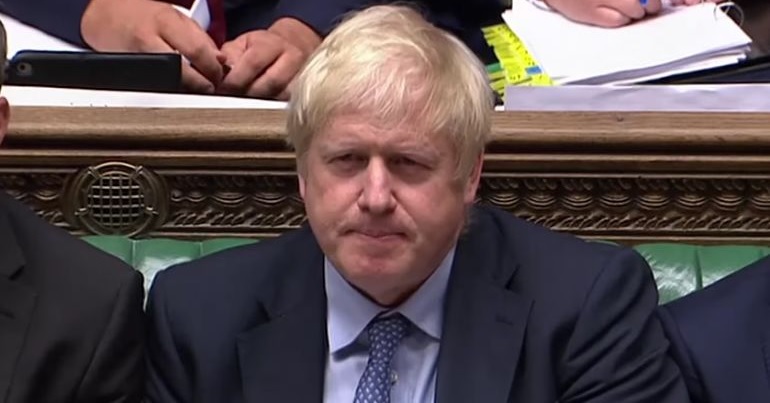 Prime Minister’s Questions (PMQs) did not go well for Boris Johnson on 4 September. Labour leader Jeremy Corbyn ran rings around the PM, reducing him to pathetic outbursts. And one exchange with Labour’s Tan Dhesi really was the final nail in the coffin for Johnson’s PMQs disaster.

Everyone should watch this incredibly powerful moment. pic.twitter.com/8J53SDZsra

Dhesi brought up the PM’s past written remarks about Muslim women, saying:

For those of us who, from a young age, have had to endure and face up to being called names such as ‘towel head’, or ‘Taliban’, or coming from ‘bongo bongo land’, we can appreciate full well the hurt and pain felt by already vulnerable Muslim women when they are described as looking like ‘bank robbers’ and ‘letterboxes’. So rather than hide behind sham and whitewash investigations, when will the prime minister finally apologise for his derogatory and racist remarks?

Can I just say to the honourable gentleman that, if he took the trouble to read the article in question, he would see that it was a strong liberal defence, as he began his question by saying, of everybody’s right to wear whatever they want in this country.

As he explained, the Telegraph article in which he wrote that Muslim women who wear burqas look like “letter boxes” and ‘bank robbers’ wasn’t arguing for banning the burqa. But in raising this at PMQs, he cynically missed Dhesi’s point. Because the Labour MP was essentially asking Johnson to apologise for opening Muslim women up to more hate crime and ridicule. As he said, there was “a spike in hate crime” after Johnson made the comparisons. And it wasn’t a small increase either. Tell Mama says Islamophobic hate crime increased by 375% in the week after Johnson’s comments. Furthermore, it claims that 42% of street-based incidents reported during that time “directly referenced Boris Johnson and/or the language used in his column”.

In addition to defending his article as ‘liberal’, the PM also talked up his diverse heritage and cabinet. He then deflected the issue further by claiming antisemitism is “rampant” in Labour’s ranks.

Antisemitism is not ‘rampant’ in the Labour Party. It exists there (amounting to around 0.06% of the membership) like everywhere else in society. And wherever it is found, it is wrong. So is Islamophobia; and that does appear to be ‘rampant’ in the Conservative Party. Yet the party dragged its heels on starting an investigation into this prejudice in its midst. Then, faced with a very public opportunity to condemn Islamophobia, and any part his words have played in it, Johnson jabbered on about ‘liberalism’ and Muslim ancestors.

The whole PMQs showed him as unfit to be PM. His exchange with Dhesi was truly the final nail in that coffin.

Featured image via The Sun/YouTube