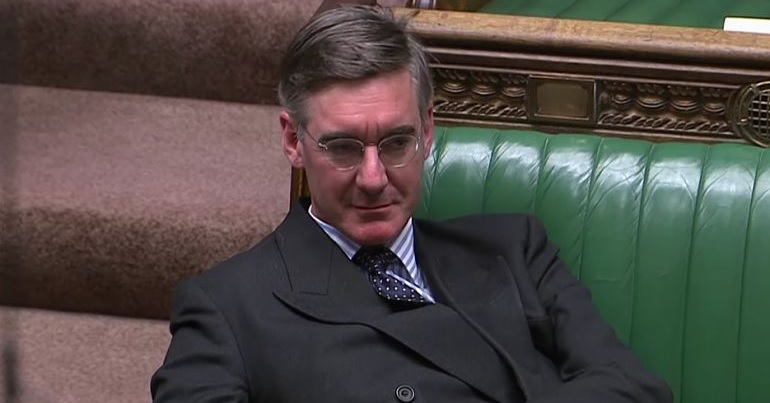 Jacob Rees-Mogg has faced criticism for lounging in the Commons during an emergency Brexit debate on 3 September.

Here’s Caroline Lucas calling out the contemptuous body language of Jacob Rees-Mogg as he lounges across the Commons front benches like some sort of aristocrat relaxing on a chaise longue in Downton Abbey. pic.twitter.com/WbAzX3kekc

The display of “arrogance, entitlement, disrespect and contempt” has generated some hilarious spin-offs, though. And one of them is going viral.

Filmmaker Alejandro Negueruela mocked up a cuddly moment between himself and Rees-Mogg as the MP appeared to be sleeping in the debate:

Your taste is men is deplorable, but you, Sir, are a true artist! Love the love between you two.

You are a genius. LOVE this.

This is kind of hot so now I’m confused

It wasn’t the only meme of Rees-Mogg’s relaxing time going round, though:

The dream of Jacob Rees-Mogg. (Via The Telegraph) pic.twitter.com/kM93sIeOK4

#JacobReesMogg .. As the man said “he is a lovely fellow when he is asleep 💤 but a strange fish 🐟 both in & out of the water” pic.twitter.com/sv0IKZ9jn8

Clearly, people enjoyed poking fun at Rees-Mogg’s parliamentary insolence. Laughter is the best medicine, they say. And what else can you do when the MP who’s played a huge part in bringing Britain to the precipice of a no-deal Brexit – and is leader of the Commons – shows this level of disdain during a debate on Brexit? If we don’t laugh, we’ll cry – for the sham that is Britain’s ‘democracy’.