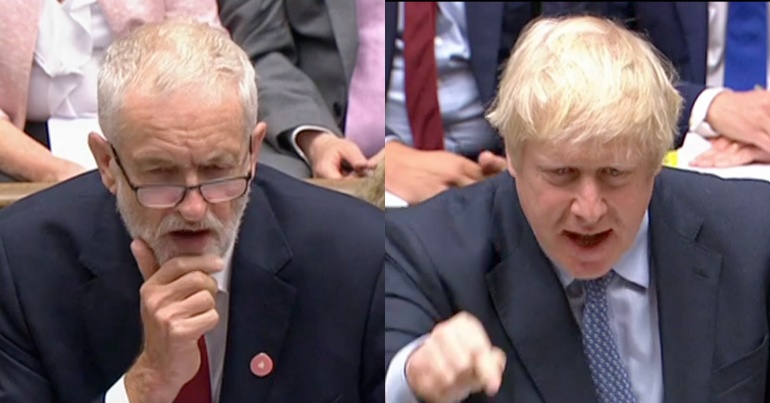 On 4 September, Boris Johnson faced his first ever Prime Minister’s Questions (PMQs) as leader of the Conservative Party. But he didn’t just bomb; he was in tatters.

In the face of continued insults, opposition leader Jeremy Corbyn remained calm and composed. In fact, he totally wiped the floor with him.

You’re there to answer questions Johnson, not ask them

The clue’s in the name with PMQs. But Johnson failed to give a meaningful answer to any of the questions. In fact, he actually asked more than he answered.

On 3 September, the Telegraph‘s Peter Foster indicated that attorney general Geoffrey Cox claimed Johnson’s ‘promise’ to remove the controversial Irish backstop as part of any Brexit deal is “complete fantasy”:

In which case Geoffrey Cox is right. The 'bin the backstop' route is a 'complete fantasy' and leads to 'no deal'. /16

So Corbyn asked about this and if Johnson’s Brexit strategy was actually just to run down the clock. Johnson didn’t answer. He said Corbyn wanted “mobs of Momentum activists” blocking the roads. Then, he challenged Corbyn to an election, asking “or is he frit [frightened]?”

Corbyn calmly pointed out that Johnson hadn’t answered the question and tried again. He asked for details about any proposals sent to the EU.

And on it went.

Corbyn asked vitally important questions about the possible impact of a no-deal Brexit on ordinary people. Johnson refused to answer. In fact, he also completely lied about the fact that Michael Gove previously said “some” food prices would increase under a no-deal Brexit.

So as Corbyn pointed out, Johnson had:

failed to answer my questions about food supply, about medicine supplies, and about the problems in hospitals. He refuses to publish the Yellow Hammer documents, and he talks about scaremongering, where does the information come from other than his office, in his government?

It wasn’t difficult for people to spot that Johnson didn’t really answer any questions at all:

Boris Johnson's short career of appearances at #PMQs gets off to the following start:

Jeremy Corbyn on fire at #PMQS

Boris Johnson pointing, blustering, insulting …. no answers, no mandate, no majority, no morality.

In fact, some saw Johnson’s first PMQs as “calamitous”:

I’ve seen quite a few Prime Ministerial debuts at pmqs…that was the most calamitous by miles.

When Corbyn went on to point out that Johnson is “desperate to avoid scrutiny”, it got worse. Because the prime minister just hurled misogynist, Eton-schoolboy-type insults at the Labour leader:

This was Johnson's level today, while Mr Corbyn endeavoured to get him to answer pressing questions about the clear risks of no deal brexit.

And, seriously, what's wrong with great big girls or their blouses Johnson — casual misogyny from the PM at #PMQspic.twitter.com/n3pVghygPO

Boris Johnson appeared to shout "call an election, you great big girl's blouse" to Jeremy Corbyn as the pair sparred for the first time at Prime Minister's Questions #PMQs pic.twitter.com/oSSSjn0gNb

'Jeremy Corbyn thinks our friends are in The Kremlin, and in Tehran, and in Caracas – and I think he's Caracas!'

Boris Johnson faces off with the opposition leader during PMQs. pic.twitter.com/tImKWQanGv

Theresa May wasn’t great at PMQs during her time as leader. But many people felt Johnson totally put her shambolic performances in the shade:

Is Anyone thinking Boris Johnson better than Theresa may??

Poor Theresa May – she put years of effort into being Britain's worst ever PM and then along comes Boris and beats her on his first day.#PMQs#Parliament#GeneralElection2019

Others, meanwhile, hope that this may be Johnson’s first and last PMQs:

Wouldn’t it be beautiful if Boris Johnson – the man who believed he was born to rule – ends up being the shortest serving Prime Minister in British history? Today is his first #PMQs, and with a bit of luck, it should also be his last.

With Johnson proroguing parliament and opposing a parliamentary battle to stop a no-deal Brexit, these are unusual and challenging times. Johnson’s disastrous PMQs confirms, yet again, that he’s not fit for office.

Corbyn, meanwhile, showed the calm poise, intelligence, and dignity of a true leader.