Another day, and yet another Tory candidate is accused of lying - Canary 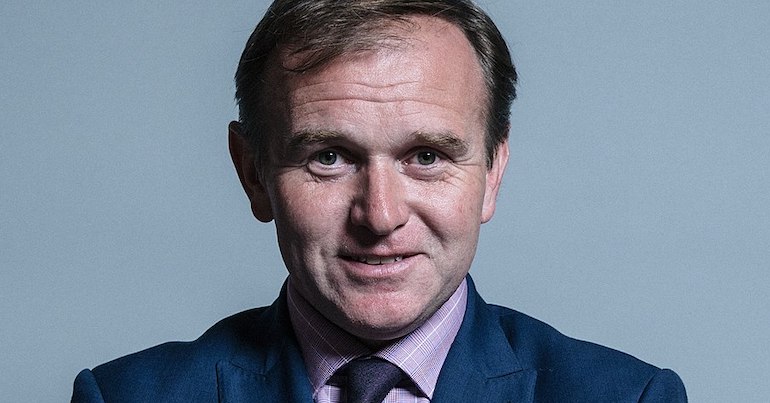 A Conservative MP has been caught out playing fast and loose with the truth on the campaign trail. Cornish MP George Eustice has been accused of lying about one of his constituents on his Facebook campaign page.

“The way Momentum train them to behave”

Eustice is seeking re-election as the Conservative MP for Camborne, Redruth and Hayle (CRH). He’s also agriculture minister at the Department for Environment, Food and Rural Affairs (Defra).

After a day canvassing, Eustice wrote on his campaign page:

towards the end of the day we came across a Corbyn activist who followed us into the road in his pyjamas shouting in a hectoring manner and filming on his mobile in the way Momentum train them to behave. It was most bizarre, but this is the sort of behaviour that has caused so many decent Labour Party members to quit their party.

But evidence has since emerged about this so-called “hectoring” constituent. It shows a very different story.

Sheffield Disabled People Against Cuts (DPAC) shared a video that shows what actually happened. The man in question speaks calmly saying Eustice has done “pretty much nothing” for this constituency and points out that he has a ‘no cold callers’ sign clearly visible in his window. When Eustice walks away, the man videoing follows and explains:

I’m a postman, my wife’s a nurse, why am I going to vote for you; a Tory? You’ve done nothing for this area – absolutely nothing. What do you think about us postal workers? … You’ve disturbed me on my day off, I’m a working man.

The man explains why many people in the area intend to vote for the CRH Labour candidate Paul Farmer.

Eustice tells the man to “go back to sleep”.

At no point was the constituent ‘shouting’ or hectoring’. He did, however, raise points that are important to many CRH constituents, as many of its wards are among the 10% most deprived areas in England.

Tory candidate in Cornwall caught *lying about a constituent* on Facebook campaign page.

Said it before and we'll say it again; Never trust a Tory!

… by the way, someone should tell "George Eustice" that there's nothing wrong with wearing PJ's in the daytime.

A source told The Canary that the man in question is not a “Momentum member let alone having been ‘trained’ by them”. He also feels that Eustice “should remove the post and apologise”.

According to DPAC Sheffield, the postal worker only shared his video after seeing what Eustice wrote about him:

It is understood the Postal worker only released the video footage onto social media after seeing that George Eustice had put that pack of lies about him on Facebook.
Talk about an own goal George!
That's Tories for you.

It doesn’t stop there…

Someone called ‘Steve Lane’ commented on Facebook saying they’d ‘watched this incident from their window’. Lane called him a “crazy superman onesie wearing fellow”. This seemed to back up Eustice’s version of events. 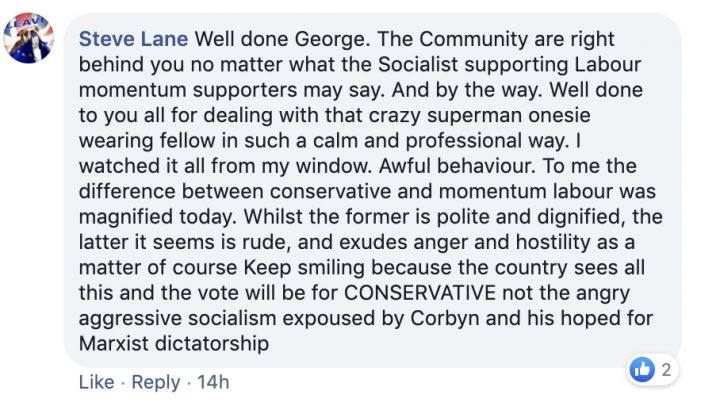 But DPAC Sheffield investigated this claim and alleged that no one called Steve Lane lives in this road. The Canary can confirm that the Steve Lane who posted the comment is married to Liz Lane, who appears to be shown canvassing with Eustice that day.

The Canary made repeated attempts to contact Eustice for comment but had received no response by the time of publication.

Another day, another lie…

Votes in CRH are vital in this election. In the 2017 election, Labour saw a huge surge in the constituency and increased its vote share by over 19%. Eustice only won the seat by 1,577 votes, and CRH is now number 34 on Labour’s target list of marginal seats.

So, not only is it a marginal seat, but real change is needed to help some of the poorest people in the country. For Eustice to share comments like this about a constituent, the Labour Party, and Labour voters is simply unforgivable. Perhaps ‘inspired’ by Boris Johnson, it seems to be the way the Tories are fighting this election, but that doesn’t mean we should let them get away with it.