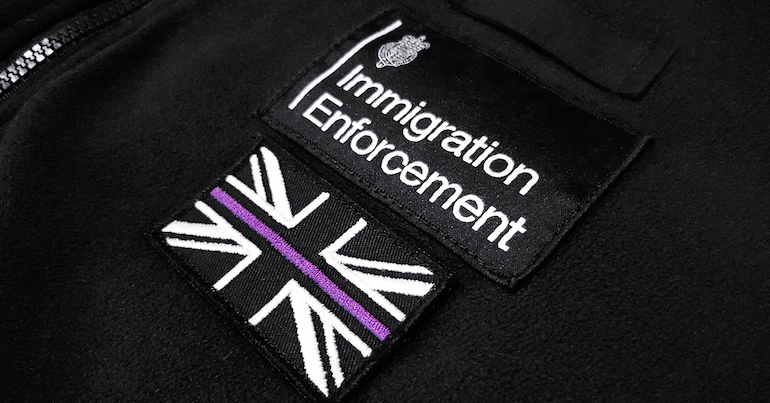 The Canary understands that a deportation charter flight to Pakistan is due to leave the UK on 26 February. The Canary has also spoken to one person currently detained at Harmondsworth detention centre who says he’s been told he’ll be deported on it. Not only did the detainee claim he was subject to torture in Pakistan, but he also alleges he fell victim to modern slavery in the UK. Given the slavery investigation should currently be pending, he shouldn’t be on this flight at all.

The person asked to be identified as WS. He’s currently a detainee at Harmondsworth Immigration Removal Centre, “the largest detention centre in Europe”.

WS told The Canary that he thinks around 150 people are due to be deported to Pakistan on this flight. The Canary contacted Harmondsworth for confirmation of this charter flight but received no response by the time of publication. However, several sources confirmed awareness of the flight and lawyers are representing a number of detainees in legal challenges.

WS outlined his complex legal case for fighting his deportation. He claims he was forced into an arranged marriage when he was 14 and his wife was 12. Following this, he claims his family made a number of allegations – which he denies – to police in Pakistan. Between 2005 and 2006, he claims he was imprisoned, beaten and tortured. WS felt he had legitimate reasons to seek safety in the UK. He said his family is “highly influential” and if he returned to Pakistan, he’d face immediate arrest. “Even if I can hide from my family in a safe area,” he said, “I cannot ever hide from the police and the state”. The Canary has been unable to verify his claims independently.

“For sure I’ll be deported”

In 2014, WS was arrested for breaking immigration law and subsequently sentenced to three years and nine months. WS wasn’t legally allowed to work in the UK after his release from prison. Without any secure income, he says he had to borrow money for legal costs.

WS claims that a Harmondsworth officer told him he will be deported:

For sure I’ll be deported… But there are a lot of people here in a far worse position than me.

However, under UK law, he shouldn’t be deported because he also alleges he was a victim of modern slavery, and his claims should be under investigation.

WS said he was approached by someone who offered him a job without needing documentation. After several weeks, WS claims he wasn’t paid. A few weeks later, WS alleges the employer withheld most of his wages “to cover accommodation”. He also says the employer physically attacked him.

The house was dirty, smelly. Oh my god, I cannot even explain. Every morning we worked from 7am until late. Every time I asked for my pay he told me to wait another two or three weeks and that I was paying for my board. But that… accommodation was a smelly mattress and blanket. We only had the most basic food: cereal and bread. After about four, five weeks he eventually gave me about £20/£30. He told me I should be grateful that he wasn’t telling immigration I’m not allowed to work and that he could get us arrested..

The Canary has been unable to verify WS’s claims about modern slavery. But Dunya Kamal from Duncan Lewis Public Law told The Canary that on 20 February, WS “submitted his own modern slavery claim”. It should, therefore, be under investigation by the Home Office’s National Referral Mechanism (NRM). This is a framework “for identifying and referring potential victims of modern slavery and ensuring they receive the appropriate support”. However, according to Kamal, it’s “not clear whether either a referral or a decision has been made on this claim”. Kamal also explained:

On receipt of the modern slavery claim, the HO [Home Office] should decide whether or not to make a referral to the NRM and then a Competent Authority should make a reasonable grounds decision.

WS stated that on 24 February, an officer reportedly told him that a decision was pending and that he couldn’t be deported until this was resolved. Yet, he claims that officers at Harmondsworth have said he will be placed on the charter flight.

WS’s MP Chi Onwurah told The Canary: “We have written to the Home Office on his behalf”.

A Home Office spokesperson told The Canary it “wouldn’t routinely comment on any individual case”. However, the spokesperson also said that deportations can’t take place during an NRM investigation.

“You just want to give up”

Speaking of the conditions at Harmondsworth, WS said:

WS also said that, as a detainee, “it’s incredibly hard” to challenge cases and follow due legal process. He also explained that when so many people are due out on the same charter flight, this makes it even more difficult to seek advice. According to Detention Action:

the security in several of the wings is comparable to a Category B (high security)  prison. Harmondsworth is run by private security company Mitie, under contract to the UK Border Agency.

In March 2018, an inspection report found “considerable and persistent failings in the safety and respect afforded to detainees”.

“She saw the scars”

Following advice, WS asked for a Section 35 Detention Centre Rules investigation. This ensures that a “medical practitioner” reports on any “detained person” whose health might be “injuriously affected by continued detention or any conditions of detention”. In addition, rule 35 reports cover concerns about detainees who “may have been the victim of torture”.

WS claimed that the GP who examined him:

saw the scars. She saw the burning, she reported that my finger was chopped. All by police in Pakistan. The GP made rule 35 in my favour. They don’t really take that into account. But there are so many other people with stories worse than me.

The Canary has not seen the report, but Kamal confirmed that “a rule 35 report from 2017” states that WS “may be a victim of torture”.

Worryingly, in nearly all of a sample of cases, the Home Office accepted evidence that detainees had been tortured, but maintained detention regardless. “Insufficient attention was given to post-traumatic stress and other mental health problems.”

“Charter flights are inhumane and unjust”

On 11 February, the government deported 17 people to Jamaica. This came despite widespread outrage and a successful legal challenge. And this government looks likely to continue charter deportation flights. Campaign group Movement for Justice told The Canary:

Charter flights deny people access to justice, with five days notice people have to build a case from inside detention. Unlike the Jamaica charter, every other charter flight contains people who have zero criminal convictions and they fly every month. The quality of legal advice in detention is low, the communications systems are regularly down – it is impossible to adequately fight your case. Charter flights are inhumane and unjust – they must be stopped!