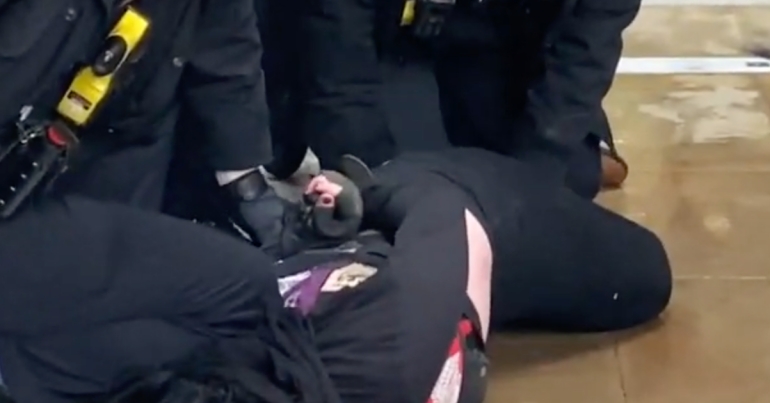 Trigger warning: this article contains footage of police violence that some readers may find distressing.

Footage captured by The Canary shows the excessive force used by City of London Police during a demonstration by the Green Anti-Capitalist Front (GAF) at the Stock Exchange on 28 February.

A person is seen being restrained face-down on the floor, shouting that they can’t breathe as a police officer kneels on their neck. And instead of listening to their cries, the police respond by restraining them further:

The protest was called under the banner of “Rally Against Capital – Fuck the Banks, Fuck the City!”. The call to action stated:

The future of the planet is under attack. We are living through the willful destruction of Earth’s ecosystems and the billions of people who depend on them to survive. We know what is causing this destruction – the capitalist system we live in and the people who get disgustingly rich while knowing that they are only able to do so by destroying the future for everybody. Currently they ignore the plight of the global south while stealing resources to pad their pockets all the same; it’s about time we said no more. No more exploitation. No more capitalism. No more climate change!

Join us on the 28th of February at 2pm at in the City of London to tell the bankers, the rich, the powerful that we won’t let them take our planet – the people will not go down without a fight and we’re taking the fight to them to show them what we can do when we organise ourselves.

A spokesperson for GAF London told The Canary:

At the Rally Against Capital, the Green Anti-capitalist Front wanted to show that it’s not regular working people but the rich, the bankers and those who protect them who are causing climate change. We led our demonstration to the stock exchange to attempt to disrupt some of the capitalist system.

The protest effectively locked down the stock exchange:

London stock exchange currently on lockdown. We have front and back entrances blocked. Not leaving tillnwe get our comrade out!

But as soon as protesters arrived at the stock exchange, the police reacted violently:

Today we held the Rally Against Capital.

GAF wanted to show who the real causes of the climate crisis are – the rich, the bankers and all who defend them.

We saw expected widespread aggression from police who jumped to defend the rich and their buildings and hurt protesters. pic.twitter.com/uqxxJbOqR6

Speaking to The Canary about the arrest footage, Kevin Blowe, coordinator of the Network for Police Monitoring, stated:

The police’s own guidance warns that pressure applied to the back of the neck of a person held in the prone position, particularly if they are small or slight, is one of the principal risk factors that can contribute to death during restraint. Its use here raises questions whether this use of force was either proportionate or lawful.

Commenting on the level of police violence, GAF London told The Canary:

As per usual, this demonstration showed how aggressively the police will attempt to protect the rich and their property against the people, using fists, batons and chokeholds to stop us gaining entry to the building. We hope this action will inspire others to take action against capitalism and show that the people will not let the planet go down without a fight.

The Canary asked City of London Police to comment on the footage. A spokesperson said:

Four arrests were made following a protest yesterday, where individuals wearing balaclavas and using flares, were attempting to enter the stock exchange.

Violence against the protesters continued throughout the day. At one point, an older man in a suit pulling a suitcase walked past the police line. He was pushed repeatedly despite being totally unconnected to the protest.

The following footage was taken during the second arrest. As can be seen at the end of the video, some of the police officers present were even happy to shout at and manhandle their fellow officers:

Throughout the day, The Canary witnessed excessively violent and disproportionate policing by officers who, at times, appeared completely out of control. Everyone needs to stand up and let the police know this level of violence is not acceptable.