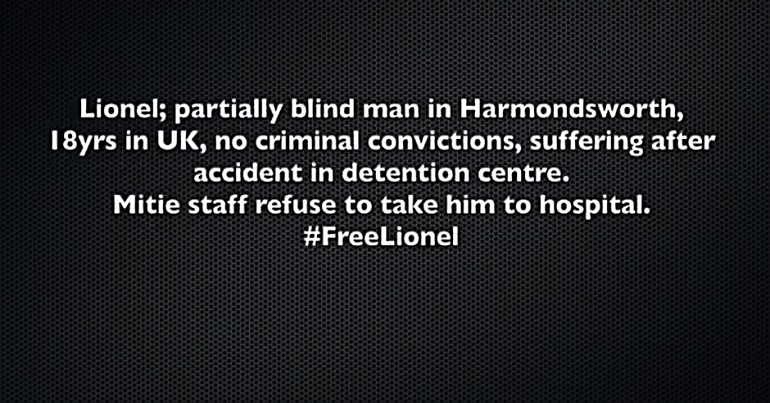 A campaign group is calling for the release of one of the so-called Jamaica 50. It claims he’s innocent of any crime. But moreover, the group has started a petition. Because since the private company responsible for detentions has held him, the group claims he’s been treated like an ‘animal’.

A scandal. One that was quickly forgotten.

As The Canary previously reported, the story of a government deportation flight to Jamaica quickly turned into a scandal. The government claimed it was deporting criminals who had committed “very serious offences”. It also said the deportations were “reasonable”. But campaign groups and the deportees’ families disagreed. MPs questioned whether all the people were indeed criminals. And campaign groups like BARAC UK said that the government was ‘tearing families apart’.

Lawyers claimed that some of the detainees had not been able to access legal representation due to phone issues. Then, the Court of Appeal ruled that some of the deportations were not legal. Yet, on 11 February, the government went ahead with the flight anyway. It deported 17 of around 50 people.

Since then, the story has gone quiet. But that doesn’t mean it’s gone away, and a campaign group’s now calling for the release of one detainee.

Campaign group Movement for Justice has been talking about Lionel Shaw’s case. As it wrote in a Facebook post:

Lionel Shaw is a partially blind Jamaican man who was swept up and detained in the recent racist dragnet of Jamaican community in UK by the Home Office to fill their unjust charter flight on 11th February – this is despite Lionel having NO criminal convictions and having lived in the UK for 18 years.

But that’s not all of Shaw’s story. Because on 24 February, he reportedly slipped, fell and fractured his ankle in three places. It also left him with back pain. But staff at the prison allegedly did nothing. They work for private government contractor Mitie:

#FreeLionel update – his ankle was broken in THREE places on Mon – yet it took almost 4 days for @mitie to bring him to hospital – operation on Mon, what kind of permanent damage has been done by that delay!? @DLPublicLaw @BARACUK @DavidLammy #jamaica50 INHUMAN treatment

For several days, the staff have refused to let him go to hospital. As Movement for Justice noted, Mitie staff were:

telling him just to raise his leg even though they have given him nothing to raise it with. In desperation last night he called an ambulance but was told that if they came Mitie would refuse them entrance.

Shaw’s has been guarded by Mitie staff in hospital, too:

They’ve 2 guards at his bed all times – treating HIM like criminal – @mitie also saying @ukhomeoffice policy he’s not allowed any visits in hospital! To reiterate, this partially blind man has never had a criminal conviction in his life #FreeLionel #Jamaica50 #EndDetention https://t.co/IWAyYCkPdw

Movement for Justice summed up the situation:

How… [Mitie staff] treated him is how they treat all detainees – like animals, the guards and ‘healthcare’ staff at the detention centre view all detainees as liars, the only care Lionel got was from his cellmate and other detainees.

Now, the group has launched a petition. It calls for the government to release Lionel. The petition says:

His lawyers are working on a court action to get him released, we need to keep up the pressure to ensure this man is NOT taken back to detention, that he is given back his phone and he is allowed family and friends to visit.

So far, Mitie has not commented on Shaw’s case. Nor has the government. But the hashtag #FreeLionel has been gaining some traction on Twitter:

This is utterly sickening! We all need to be shouting about this. It should be front page news. #FreeLionel https://t.co/ErP8tM36T0

It's sad that @followMFJ have to reiterate that he's not a criminal. The MSM coverage of the #jamaica50, other deportees and detainees, has led some people to believe all are violent criminals and inhumane treatment towards them is excusable smh. #FreeLionel #stopcharterflights https://t.co/Jd4iDXIiST

But this isn’t the only story to come out of the Jamaica 50 scandal. As the Guardian reported, around seven of the people the government deported have gone into hiding in Jamaica because they’re concerned for their safety. Meanwhile, another man, who’s still in UK detention, served a two-month sentence 10 years ago under the now unlawful joint enterprise rule. He and many other people still don’t know their fate.

But with the government still intent on deporting people, these horror stories look set to continue.