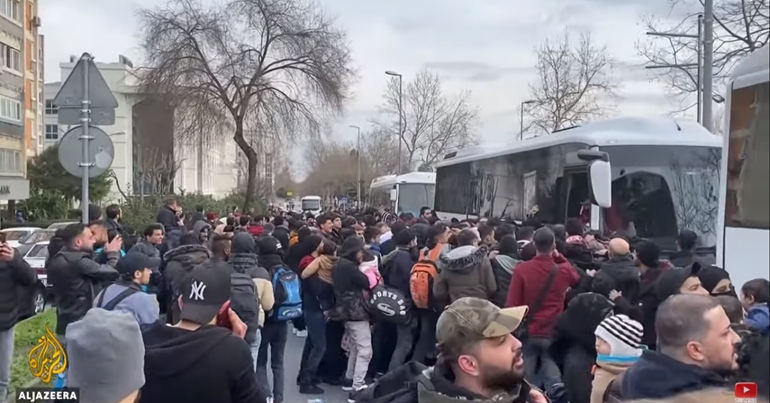 On October 2019, Turkish president Recep Tayyip Erdoğan told the EU he’d “open the gates and send 3.6 million refugees” its way. Erdoğan threatened to do so if EU leaders called his invasion of northern Syria an “occupation”. He made his comments following EU condemnation of his invasion.

And according to reports on the ground, he is following through on that threat. There are images showing refugees coming from Turkey and making their way to the Greek border by land. Meanwhile, others are attempting to make their way by sea.

This report shows refugees on the Greek-Turkish border unable to move in either direction:

Refugees have reached the Turkish Greek border close to #Edirne & now they are stuck there.

They cant go back to Turkey becaue Turkish soldiers are not allowing them.

And they cant move forward because Greece isnt allowing them.

What I feared most when hearing Turkey was opening gates to Europe were images like this. Do we not remember baby Alan Kurdi+all those who drowned in cold waters of the Aegean? Turkey should put an end to this and if not Europe should provide safe passage. pic.twitter.com/iEpj7gnnYM

And while the border between Turkey and Greece is closed, some refugees risk their lives by going through “no man’s land”.  As they attempt this, there are reports of Greek border guards firing tear gas at them:

No man’s land between the Turkish and Greek border seems to have become a literal war zone.

"They have been met by volleys of tear gas."

Refugees have gathered at the Turkish-Greek border after authorities hinted that the path would be clear for people to cross into Europe there. @Stone_SkyNews says "clearly this was never the case".

The Greek authorities have “tightened border controls” to prevent refugees entering Greece by land or sea. This message was reiterated by the Greek prime minister. He confirmed there were refugees gathering on the border:

Significant numbers of migrants and refugees have gathered in large groups at the Greek-Turkish land border and have attempted to enter the country illegally. I want to be clear: no illegal entries into Greece will be tolerated. We are increasing our border security.

Despite these reports, the EU was reportedly “skeptical” that Turkey would send more refugees to Europe. But another video shows an absence of Turkish guards on the border. This means refugees are approaching the border freely from Turkey and then being stopped by Greek border guards:

1000s of migrants/refugees today again flock to Turkish-Greek border near Edirne. Crowd is growing by the hour.

You can see in this video by @egemengok_ that there are no guards on Turkish side.

People walking freely into no man's land only to be blocked by Greek border guards. pic.twitter.com/bZo4fxFWTT

Erdoğan came in for widespread condemnation when he invaded northern Syria (known as Rojava) on 9 October last year. Some believe his intention is to “to ethnically cleanse the majority-Kurdish population of Rojava”. In the meantime these refugees wait in limbo at the border and at present it’s unclear how long that will be.