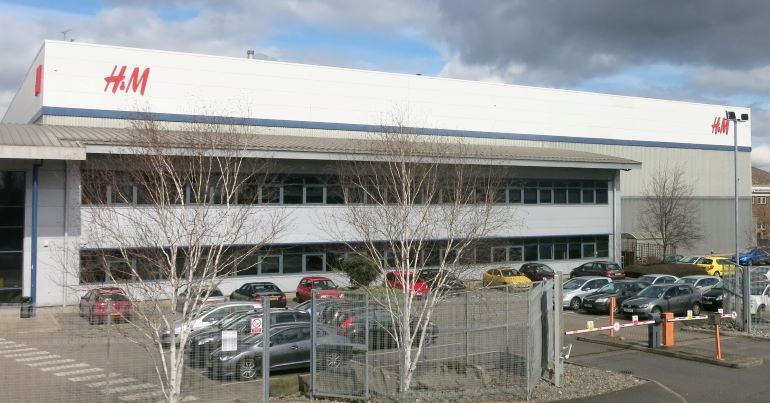 A concerned worker from H&M’s Milton Keynes distribution centre has contacted The Canary describing unhygienic working conditions and a lack of social distancing. Their account raises concerns around whether H&M is doing enough to safeguard staff from the threat posed by the coronavirus (COVID-19) pandemic.

“We have no voice”

The worker initially got in touch to express their concerns:

[H&M’s] view is that if one person in the warehouse becomes infected, then they will close. By this time it will be too late…

The environment I am working in does not respect any social distancing. As an agency worker, we have no voice. Our agencies no longer show their faces, but happy to let everyone else come in and take the risk. The company uses biometrics, meaning hundreds of workers must use [fingerprints] to clock in and out, yet I never see [the fingerprint scanner] being cleaned. There are… people here who cough and do not cover their mouths and also those who use the toilet without washing their hands. H&M further operate a hot desk environment with nothing to clean down surfaces.

They went on to suggest that H&M had no plans of scaling down its operations as a result of the coronavirus outbreak:

Three weeks ago, we were all given a briefing that the company will not be taking on anymore people, yet that could not be further from the truth. New people are still joining and they are requesting for people to train them, meaning they are stood right next to each other [during training].

The worker said that the site manager had advised people to distance themselves from one another but was still hosting group meetings. And closer interactions during training sessions were still carrying on as well.

When asked if they knew of any colleagues who had been off sick recently, they said:

Not that I know of. The company has around 10-12 of their own staff on our department and the remaining 120 or so were agency… in the last two weeks less and less agency staff have been showing up.

The worker assumed the drop in agency staff was “due to sickness or simply avoiding coming in”.

In terms of hygiene, they described the process in place for signing in and out, and how it could be spreading germs:

I drive into work. To access the car park, there is a finger print scanner… Inside the building, four agencies operate (Meridian, PMP, Barker Ross and Osborne Appointments). Each agency has a clocking in and out system which requires the individual to put their finger print on a machine to sign in, sign in and out for the half hour break and sign out at the end of the day. During the process of hundreds of people using these machines, they are not being cleaned.

They also mentioned that staff hadn’t received any general guidance around hand-washing or using hand sanitisers from management. Regarding access to hand sanitisers, they said:

There are hand sanitisers in the building, some of them are empty and people are using the ones that do work after they have put their finger prints on the scanners. I personally carry my own bottle, but if I am to compare and contrast the two, when I used the one what they have, it seems very weak…

When asked to elaborate on why they thought the hand sanitiser provided at the warehouse seemed “very weak”, they compared it to one they brought from home, saying, “It was the texture. It was very watery when compared to what I have”. They went on to say: “From the point of rubbing it on, it took longer for it to dry up”.

Part of the worker’s concern is around the precarity of working with an agency:

I know how things are with agency staff, in the sense they can just get rid of people as and when they want.

Moreover, they described a conversation with an H&M employee about taking phones from staff. This employee believed that H&M did not want agency staff coming in and taking videos or pictures. If found with a phone, agency staff would be asked to leave and likely not be allowed to return, while H&M staff would face penalties.

The worker went on to say:

A few days ago, I went for a break and they had two people with trolleys asking people to empty their pockets, phones, wallets, keys. I later understood this was why. They did not want people bringing phones into the workplace, although they tell people that they can not bring this in anyway. But the behaviour in asking people to empty pockets was as though we were in an airport or some kind of correctional facility.

Asked if there had been any announcements from management about handing over devices or reasons for doing this, they said:

No communication whatsoever. There is a no phones policy in the warehouse which was communicated from day one, however the checking to see if people had phones on them came as a surprise.

The Canary contacted H&M for comment. A spokesperson said:

We are closely following UK government advice which has advised online retail remains open and encouraged. We will continue to be led by local government advice and health authority updates and continuously review the situation.

We understand that not all positions are able to work remotely but those who can have been encouraged to do so.  For those who are unable to work from home we have put additional measures in place such as strict hygiene routines, thorough and more regular cleaning of premises and where required, adhering to social distancing recommendations.

Our planning, whilst putting safety first, also considers how to take care of our employees and business both now and in the long term.

We are doing our best to navigate this unprecedented situation and we would like to thank all of our colleagues for their continued efforts during this time and their dedicated support.

The Canary also contacted the staffing agencies for a response. Osborne Appointments deferred to H&M for comment. The other agencies, Meridian BS, PMP Recruitment and Barker Ross, had not responded by the time the article was published.

Some corporations appear to be using the government’s policy of encouraging online shopping, even for non-essential consumer items, to prioritise profits over workers’ safety. Warehouse operations are carrying on despite the fact that it’s putting workers at risk. When JD Sports decided to stay open after the government announced the need for social distancing, it was heavily criticised. Warehouses operating for online retail are exposing their staff to the same risks, but it’s going undetected behind closed doors.

Warehouse and factory workers are often unable to work from home and are also among the lowest-paid. Workers who come through agencies via subcontracts, as is the case with so many similar warehouses, are in an even more precarious position. Because as casual staff, they may not qualify for statutory sick pay, which is barely enough to live on in any case, and have no job security. The government’s lax guidelines aren’t just putting workers at risk, they’re also disproportionately affecting the lowest-paid workers, who’re at the mercy of their corporate employers’ ethical codes.

The working class at the mercy of corporate greed

The virus has already claimed the lives of 4,934 people in the UK. The total percentage of deaths is set to be even higher than in Italy or Spain. And the government has done precious little to prevent the spread of the virus so far, whether via promoting ‘herd immunity’ or by causing overcrowding on public transport through mixed messages and indecisive action.

The strain on the NHS will only intensify as the pandemic progresses, so the only responsible move is to take every precaution to minimise the spread of the virus. Allowing workers in non-essential services to carry on working without appropriate safeguards for the sake of corporate profit, while not doing enough to assuage their concerns around financial security, is a ticking time bomb. And it’ll hit poor, working-class people the hardest.