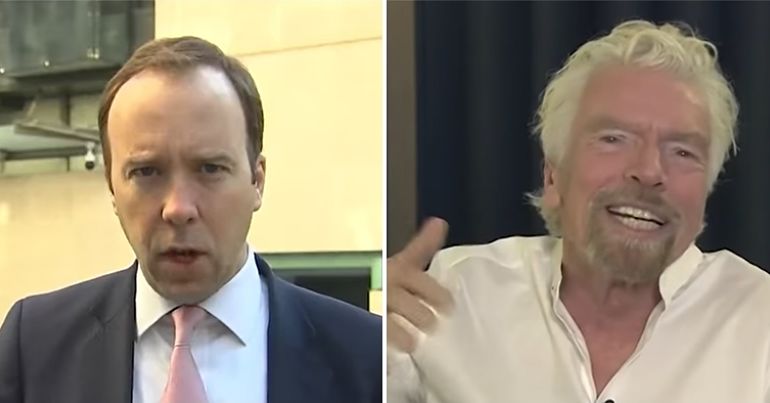 CORRECTION: The article originally incorrectly stated that the £7.5bn bailout was going to Virgin. It is in fact going to the airline industry as a whole. We have also changed our characterisation of Richard Branson as a “tax exile” to someone who “pays no tax in the UK”, and included further comments from Virgin. The corrections and additions were made at 12pm on 8 April 2020.

Pickard asked two questions. It was Hancock’s meandering response to Pickard’s question about a possible taxpayer bailout of Richard Branson’s Virgin Atlantic that spoke volumes. And the fact that he couldn’t definitively reject that notion was utterly galling.

The question and answer

Secretary of state, could you please tell us ‘yes’ or ‘no’ whether the government is preparing to take equity stakes on taxpayers’ behalf in some of the large companies which have found themselves in major crisis because of the pandemic? And if so, do you think that Richard Branson’s Virgin Atlantic is a worthy recipient of that kind of assistance, given that in 2017 Virgin Care sued your beloved NHS after losing a contract, and given that Sir Richard lives as a tax exile on Necker island?

Well…I’m going to erm, not answer the first question

But then when he did actually attempt to answer, he rambled on, saying chancellor Rishi Sunak was “doing unbelievable work” and rehashing information about Sunak’s announcements for the economy. Other people picked up on his rambling response:

Jim Pickard asks perfectly straightforward question whether the Government is going to subsidise tax exile Richard Branson’s company, Hancock refuses to answer, passes the buck to Sunak, who isn’t present. This is why we need Parliament in operation online to hold gvt to account. https://t.co/v8uVRFD3LB

Pickard later stated on social media that his question was relevant given Branson once sued the NHS. This, of course, would be relevant to any health secretary. But the question is relevant for more than just that. It’s relevant because, during this time of crisis as reported by The Canary‘s Steve Topple, disabled and poor people are being “screwed over”. So, bailing out large companies has no justification.

What a tax equity bailout would mean

On 21 March, the Financial Times reported the British government was planning to buy “equity stakes” in companies affected by the pandemic. This could include airlines. The government would buy shares in these companies – with taxpayers’ money – in return for owning a share of that company.

In March, chancellor of the exchequer Rishi Sunak announced £350bn of loans to UK businesses. But the Financial Times reported this may not be enough to save businesses, so further investment may be required. This means the government may need to spend more taxpayer money to bail out big business.

This could mean taxpayers’ money bailing out Richard Branson’s airline Virgin Atlantic. That would be particularly inexcusable given that Branson’s Virgin Care sued the NHS in 2017.

Where government priorities have been

Days after the chancellor announced measures to support British businesses, he announced he’d pay up to 80% of people’s wages who’d lost their jobs because of the coronavirus. Then, on 26 March, Sunak announced an income support scheme for the self-employed.

But that scheme could exclude two million self-employed people. Also, measures to pay 80% of people’s wages exclude those who started a new job after 28 February and it could exclude carers also.

And government spending doesn’t seem to have affected continuing the HS2 high-speed rail project. A project that could almost double in cost to £106bn. Labour peer Lord Berkeley dismissed it as a “vanity project for people who want to get to London quicker”.

Where government priorities haven’t been

By contrast, the government has effectively ignored those who need protection the most. Sky News reported that a GP’s surgery had asked patients to complete ‘do not resuscitate’ (DNR) forms in case their condition worsened because of coronavirus.

There has been a lack of personal protective equipment (PPE) for our frontline staff. And the clothing that Public Health England (PHE) advises such staff to wear doesn’t always go as far as the World Health Organisation (WHO) recommendations.

As The Canary‘s Emily Apple reported, Johnson’s approach is finally under attack from the establishment media. The testing Johnson promised isn’t happening and some of the test kits that are arriving in the UK could be unreliable. In the meantime, frontline staff in the NHS are off work and self-isolating while others are dying.

There appears to be little or no assistance for homeless people as the government provides such meagre support. It’s insulting more than helpful. Tragically it’s not surprising as Johnson initially tried to downplay the seriousness of the virus and promoted ‘herd immunity’ as a response.

On what planet or under what system can it be considered acceptable to use an estimated £7.5bn of taxpayers’ money to bail out an industry in which a major player pays no tax in the UK? Someone whose company has taken legal action against the NHS in the past?

While the chancellor claimed his support programme was “unprecedented”, it sounds all too familiar. Taxpayer bailouts for the wealthy are intolerable in any climate. This worldwide pandemic is like no other in recent times. So our response must also be unprecedented and it must also focus on those who need our help the most.

Virgin points out that Virgin Atlantic is a UK-registered company that contributes around £350m to HMRC each year. It also told The Canary that it took legal action against the NHS because it had “serious concerns relating to flaws in the procurement process”. A spokesperson said:

Neither Virgin, nor Richard, have taken a penny out of the NHS, nor is there any intention to. All monies received have been reinvested back into paying for delivering services, including the salaries of doctors, nurses and allied health professionals, as well as being invested in transformation projects to improve the NHS. In addition, Virgin Group has invested more than £75m into Virgin Care, has not been paid any dividends and has pledged to reinvest any potential future dividends back into the business. I would also like to say how enormously proud Richard and everyone at Virgin Group are of the 4,500-strong Virgin Care team who have, like everyone else in the NHS, been going above and beyond in this time of crisis.

Virgin also says that Branson lives in the British Virgin Islands [BVI] for lifestyle reasons, and that he:

spends the majority of his time starting not-for-profit ventures and raising millions for charity through speeches and other charitable engagements. Since he gives 100% of any monies he earns from these activities to charity, it makes no difference for his personal tax purposes whether he is located in the UK or the BVI.