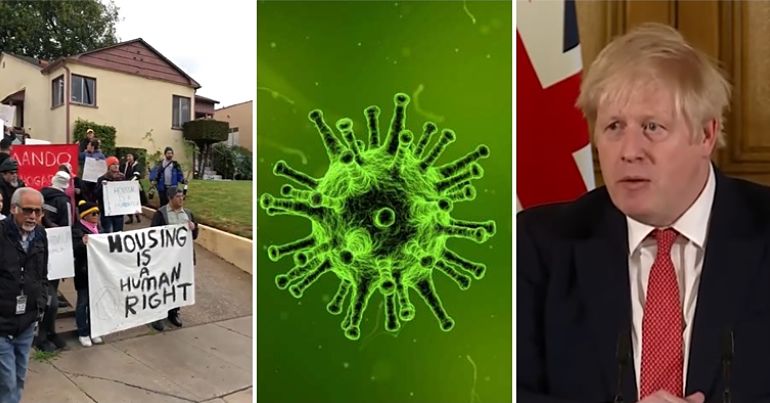 As one hotel “sacked and evicted its staff” as a result of the coronavirus (Covid-19) pandemic, it’s somewhat timely that homelessness charities would send a warning to Boris Johnson. The charities have written to the prime minister to tell him the pandemic could ‘overwhelm’ their services.

The Manchester Evening News reported that over “30 homelessness charities have collectively written to the PM warning they face ‘unprecedented challenges’ which will ‘overwhelm them’ if the government doesn’t act fast.”

And given the support the government is offering to British business, it’s somewhat puzzling the same can’t be offered to homeless people during this great crisis.

These are welcome steps but there are still significant gaps in the government’s response.

We are already hearing reports of housing offices closing leaving those who face homelessness, including those being made homeless as a direct result of coronavirus, with nowhere to go to seek support.

This is unsustainable and will undoubtedly put lives at risk – the government must provide local authorities with advice on how to safely keep these functions running during the pandemic.

We are also concerned that keyworker status alone is also not enough to guarantee the safety of our colleagues and their families: we need to ensure hostel teams are provided with personal protection equipment similar to that offered to essential frontline staff in similar sectors.

This £3.2m is utterly dwarfed by the estimated £428bn bailout announced for British businesses. The chancellor of the exchequer has announced two separate plans to help British businesses deal with the effective lockdown of parts of the British economy. The plans will also help to pay staff wages during this time.

Food poverty and other challenges

Homelessness charities warn of the ‘complexities and hurdles’ rough sleepers have to deal with. The closure of tube stations in London, some of which close with no notice, make it difficult for rough sleepers to get to food banks.

Shelter CEO Polly Neate said in an interview with Metro:

Some food banks face closure or have closed already due to a fall in food donations and staff volunteer availability. A north London soup kitchen no longer allows people to ‘sit down and have a chat’ as they eat. Instead they operate a takeaway facility.

The writer behind the London Homeless Info blog warned that soup kitchens could close with little warning, and that some are now offering less food than before.

However, some organisations and local councils are already taking action to protect homeless people during this outbreak. Islington Council is providing temporary accommodation for homeless people to self-isolate. The borough council was one of the first to react to how this crisis could affect homeless people.

Meanwhile, according to the Los Angeles Times, a group of “homeless and housing-insecure protesters” in LA took over 12 publicly owned houses. They did so because:

government officials have failed to provide the shelter that’s necessary for them to remain healthy during the coronavirus pandemic.

Campaigners have called on the government to provide a support package for homelessness organisations similar to the grants available to businesses. On 20 March, chancellor of the exchequer Rishi Sunak announced measures to support businesses. Sunak said:

Government grants will cover 80% of the salary of retained workers up to a total of £2,500 a month.

Yet these measures have been “slammed” as they do not offer sufficient protection to the self-employed, small businesses, or those in precarious employment. And if the government can find huge sums like this to support businesses, it can certainly do likewise for people in much greater need.